Age of Wulin Path of Evil Guide by Maouchi

On the top left of your characters portrait there is a (shield-icon when or a sword-icon) depending on what mode you currently have activated.
Left click this icon and it opens up a tab “see below” 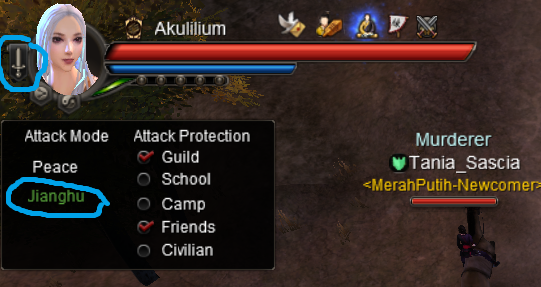 After enabling Jianghu mode by left clicking it once so it is highlighted green, then you should enable some safety options to make sure you won’t attack your fellow guild members click the “guild” box, to avoid hitting people in your friends list, enable the box “friends” or enable the box “school” if you don’t want to attack fellow school members to avoid getting any school discipline points ”

There are several ways to recognize other people who are following the path of evil
When clicking on a fellow player, right click theire portrait , and then left click ” check equipment”
this will show their characters attributes “see below” 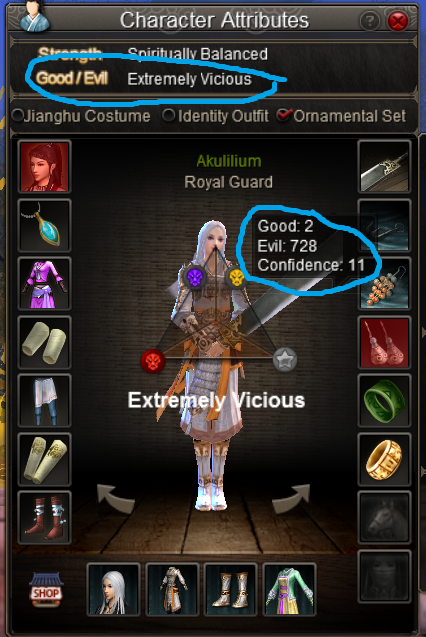 Now when looking at the top left , you see the words”Good/Evil” hover with your mouse cursor on it and it will open a window which shows how many points they got into theire chivalry

There is also a easier way to reconize players who are in the path of evil
when the player has significant more evil moral then good moral, theire icon “left of theire name” will be turned into a red skull “see below”

Now why is this important ” you are probably wondering”
To avoid getting any good moral, you should avoid killing people with high evil moral ” red skull” this will not give you a +1 for your evil moral but instead this will increase your good moral by +1

There are several ways to obtain evil moral

~2: Do instance or faction runs with other people who share the (red skull mark) “make sure when doing this that atleast 4 of the 6 people are in the pad of evil, otherwise you are risking a chance that it would increase your good moral instead

~3: Kidnap ofline players, to do this you first have to buy the needed kidnapping item at any “General goods vendor”
“See below” 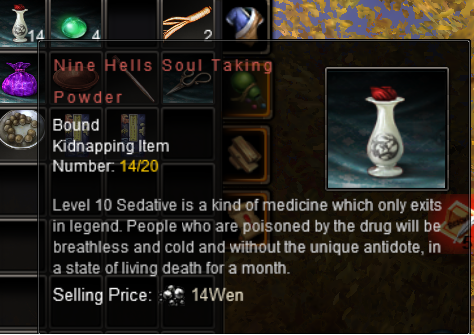 When you have succesfully kidnapped a ofline player, you need to bring him to a Np’c willing to buy those players
Open up your mission tab “see below” 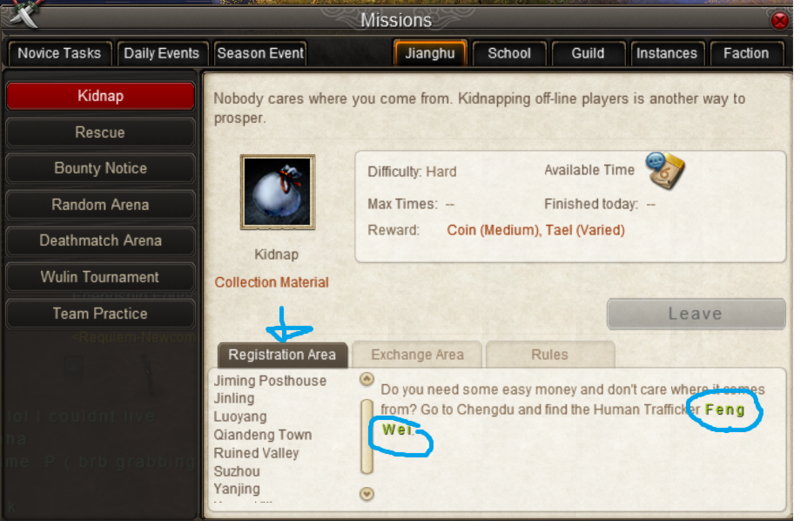 Then when you have pressed the kidnap-mission tap, look under the registration area.

Here it will display all the area’s who have a Np’c willing to buy the ofline player you have kidnapped.
To locate that Np’c, click under the registration area which is in or closest to your current scene, then left click on theire name , this will auto path you to the Np’c. (I reqoumend after locating the np’c that you turn off auto path) cause the moment you are carrying a ofline player , other players are able to attack you and kill you without receiving any Infamy, so you need to stay on top of your toes since everyone could be a threat at that moment.

~4: “Robbing escorts To do this “open up your mission tab and click on “Hidden escort robbery”

After clicking this tab, you have to click on “dispatch secret sentries”
“see below” 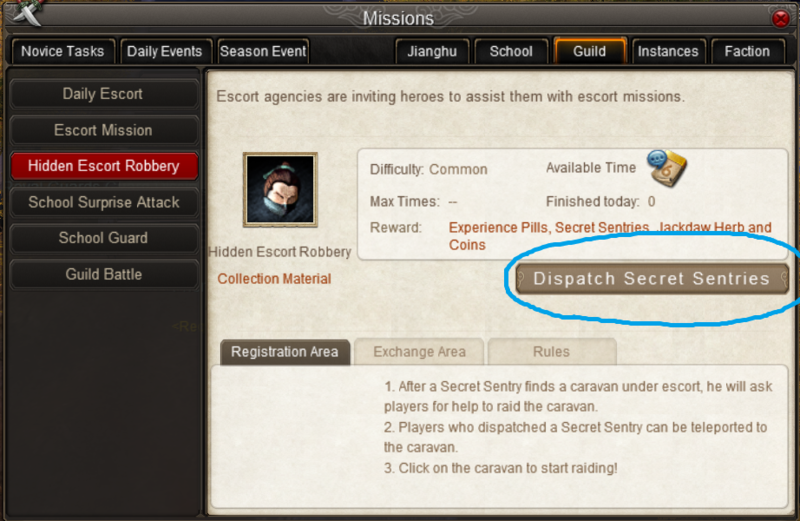 This will open up the map of the current scene you are in.
“see below” 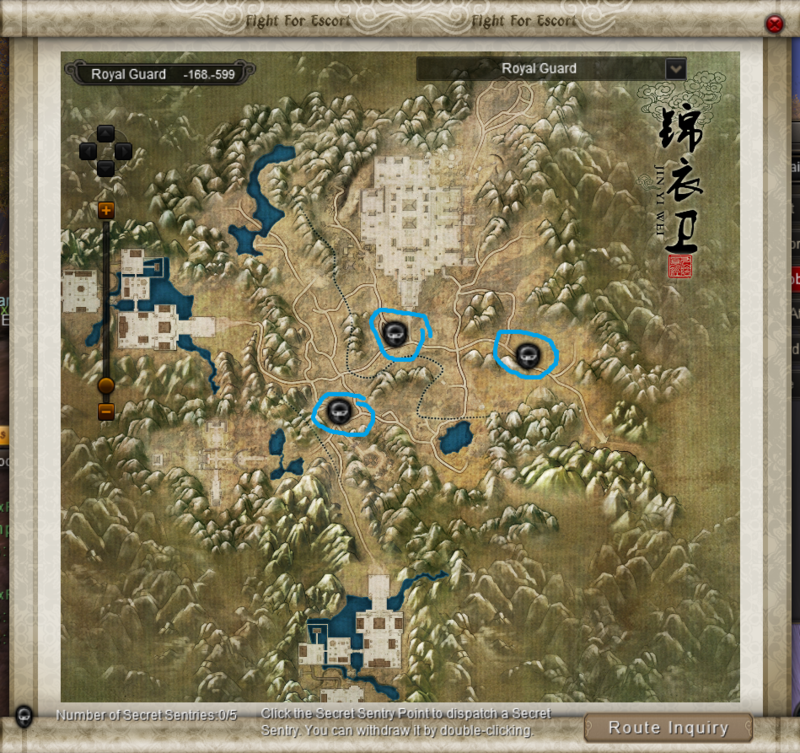 The map will contain 3 or more sentrie points which you can click to dispatch your sentries.
This basicly dispatch a scout which will send you a message when they spot a caravan which you are able to rob.
Left click one till three “sentry points” it will be highlighted when enabled.

When they are enabled ,you will occasionally receive a pop-up message from one of your sentires saying that they spotted a caravan, which if you accept will teleport you to one of the spots you dispatched your sentries.
(altho you can only dispatch 3 sentries its still possible to spread them over several scenes)

When teleported to the area, there is a chance other players are robbing the same caravan.
If they do, the game will put you in the same team automaticly

(Keep in mind that its also possible for you to rob a caravan without dispatching a centry).
The moment you spot a caravan, you can left click it when you are close enough.
When done, it will open a tab which will ask you if you want to rob the caravan or not.

The moment you press “yes“, you will gain the bandit mark which you will gain after teleporting received from a sentry aswell.
This will automaticly enable your hidden escort robbery mission.

To loot the caravan you have to destroy it, but the moment your attacking it, players who aredefending the escort are able to attack and kill you without receiving infamy .
So make sure when you want to rob a escort, that you have the men power to do so.

*The more players you killed and evil morallity gained, the more titles you will gain
(for example: murderer, killing devil and many more)

When killing other players you will receive a ammount of infamy
Killing a player raises infamy by 400, with an additional 50 for finishing them off
The moment you killed a player your name will be turned orange
This indicated that you basicly murderd someone

When your infamy reached 2000, your name will be turned red
If you are killed with 2000 infamy or more you will be send to jail

When your infamy has reached 6000, Np’c constables will randomly spawn at certain locations to hunt you down
Its not possible to afk or stand still for a long time at the same spot since the np’c constables mission is to get your ass into jail
(Even tho they spawn randomly, they will always spawn at a ground location. This means you still are able to afk on a location only reachable by jumping or any other fly skill “like rooftops or trees“)

When your infamy has reached 8000, your name will be turned purple
This is the moment when if you get caught you will not be send to the ordianary jail anymore
Instead you will be send to the execution or death sentence.
You will be sheduled for a execution which results into a nasty debuff.

(the debuff can be cured but the waiting time for the execution is worse since it will slow down your cultivation)
So make sure you have enough exp/ cultivation speed so you wont end up in jail without receiving any cultivation points.
To check how much infamy you currently have, open up your character attributes tab
Your infamy will be displayed to the right “see below” 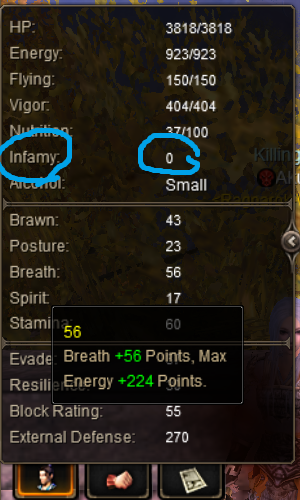 If you haven’t enabled the check box “school” in jianghu mode, and end up killing fellow school members, you will receive school discipline points
Once your Discipline Value reaches over 100, your school will be forced to punish you

The next time you teleport back to your school, you will be teleported to your school’s Repenting Ground instead
There you will receive one of the worst debuffs in game which lowers your stats drasticly
This debuff cannot be cured.
(each school follows theire own punishment system and has theire own rules which is allowed and what is not but each school share in common that killing fellow school members is not allowed without receiving disciplinary points)

To reduce your school discipline value you may repent at the school’s repenting ground which reduces your discipline Value by 10 every 10 minutes.
(While repenting you cannot move, attack or be attacked but your still able to join the schools patrol to receive a faster cultivation speed)

Your able to bribe the guard with unbound silver
The higher your infamy, the more unbound silver you will have to pay as a bribe.
The guard will release you instantly if you bribed him, not to mention your infamy will be reduced back to 0 right away

Your also able to gamble with the guard for bound silver

Winning a gamble will reduce your infamy by 500.
The chances are very low your able to have all 3 dices correct.
He will release you from jail once your infamy has reduced to 0 again.

If you find yourself in the death sentenceyour able to try to achieve a prisonbreak
You have to send out request at the prison guard at 5 friends asking them to help you escape from prison.
(You can only do this when there’s still <1 hour before you got beheaded)

The moment you sended the letter to 5 friends and they have accepted it they will be teleported into the prison
From there they have to find 5 switches , defeat prison guard leader and break the prison door, all that before the time limit.

The moment you break the prison door, an system announcement will be sent to all Constable players of the server, notifying them that there’s a jail break going on.
Constable players may or may not rush to the prison and attempt to stop you from escaping.

*(You are not able to reduce your jail time if you where caught with a bounty on your head by a constable.
Each 10 Liang of bounty is equal to 20 minutes of jail time
The minimum bounty is 10 Liang. Bounties may be applied when killed (unless justified), or against any enemy with infamy above 0. Player characters with outstanding bounties have an orange swirl effect. Bounties can be removed by killing enough constables before being jailed)

To check your current evil ranking on the server, open up the jianghu ranking list
From there press the chivalry tab and the proceed by pressing on the evil tab
“See below” 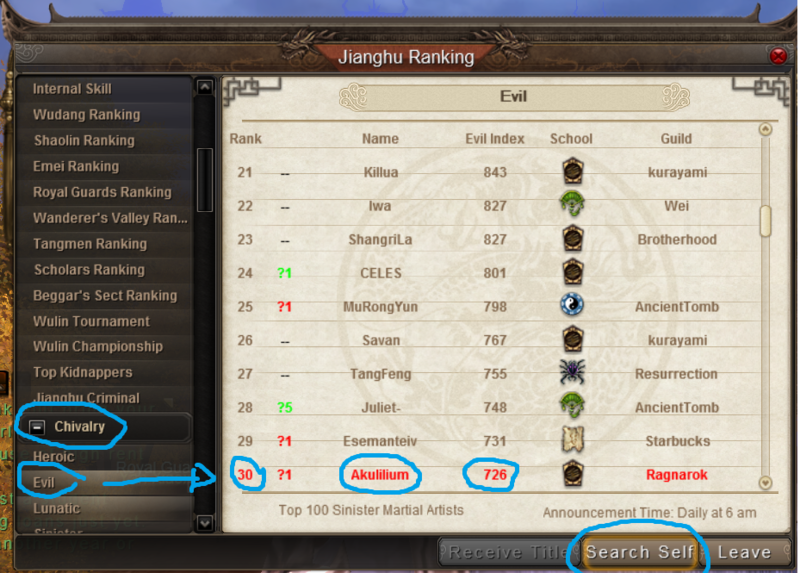 When in jail there is a chance that there is a NPC prisoners in the same prison room.
If there is , try to get their attention and they might help free you from the prison.
(its very rare and happend to me once)

PS *I appologise for my grammer use*, so back in your cave grammer nazi’s*