Taking advantage of the Test Center 1g Retcons, I settled on the following build made mostly for Midtown and eventually X-Defense, though honestly at the moment it pretty much mauls everything: 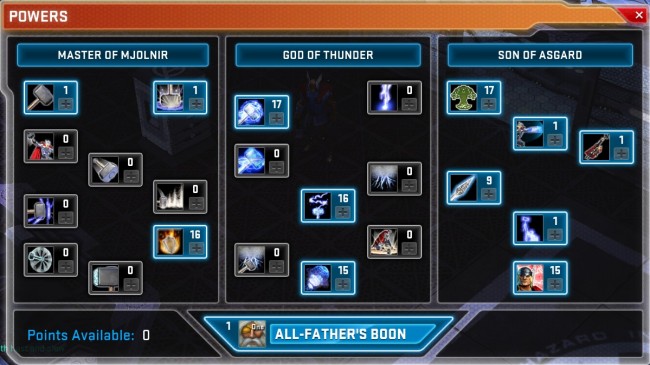 The idea is pretty simple, use Storm Strike and Storm Hammer to generate buckets of Odinforce, keep Frenzy running at max, and dump the rest on God Blast. I’d actually prefer to run Bring the Thunder in this build to bolster Thor’s single target damage as well as to drop on tightly packed Supervillains between Storm Strikes, but the damage is too low compared to live to really make it worthwhile to stop Storm Striking to even cast. As a general trash-clearing tool and Odinforce generator, Storm Strike is currently superior, so it is the primary ranged power I’m currently using in this build. Should Bring the Thunder get buffed before 1.2 goes live (and I hope it does, as it is currently way too weak), I will likely switch back to that over Storm Hammer. Thor’s single target DPS is not all that impressive; it’s only once you have another target in range to get Storm Strike to start bouncing back does his DPS begin to skyrocket. Bring the Thunder would help bring that up a bit as something you could refresh on a lone target. Storm Strike generates enough Odinforce that the tradeoff would be worthwhile.

Asgardian Frenzy currently still refreshes a max-level duration with a single pip of Odinforce, so once you have a stack running, it is best to build up to 5-6 pips of Odinforce, toss your God Blast, then refresh Frenzy with your next generated pip (which is often generated by God Blast itself). This will help get as much of your Odinforce out via God Blast damage while maintaining max Frenzy status.

This build does disgusting things to Midtown once you get into the flow of managing your Odinforce. You can easily keep a single Frenzy use up indefinitely just off single pips and still toss full God Blasts on cooldown. Most ambushes, even when they spawn multiple leaders, will get completely wiped in less than 10 seconds. On Supervillain trios, Storm Strike will absolutely wreck shop as long as you can get it bouncing between at least two targets. Your Odinforce will also generally fill up 5-6 pips per second, making it totally trivial to both keep full Frenzy and hit God Blast on cooldown. As mentioned, the only real “downside” to this build is that once you are down to a single target, your DPS returns to mortal levels. That said, I don’t really know how much more single target DPS you could get out of Thor with any build currently, so I feel it makes sense to instead focus on Thor’s strength in multi-target power.

I suspect that this will be my go-to build once X-Defense is in the game as the more “crunchy” targets there are, the stronger this build performs, which sounds like exactly the kind of thing you’ll want for the later waves. We’ll have to wait and see on that front.

I’ll put up a video this even showing the build in a bit more detail and edit it into the post.

Edit: Here’s a demonstration for those that don’t have the Test Center client to try for themselves: