After writing my “Advanced solo mid guide” I’ve received a lot of questions about hotkeys. People wanted to know how to choose them, which settings are the best and what hotkeys I use myself. To answer all of them, here’s a short guide to choosing your hotkeys:

As I said previously, I’m a big fan of optimising and making your play more efficient. But how can you be efficient when you keep missclicking spells and items or not hitting hotkeys that are too spread out? Yes, you can’t.

I’ll state this clear: i will NOT tell you what hotkeys you should use, if you feel comfortable with legacy hotkeys where spells have their own hotkeys scattered all over the keyboard, go for it. I WILL tell you though some general rules you could follow, and how I discovered my ideal combination.

To start off, there are 4 most common hotkey settings:

As you can see you can manually select your favorite hotkey setting from the list in DotA 2 options: 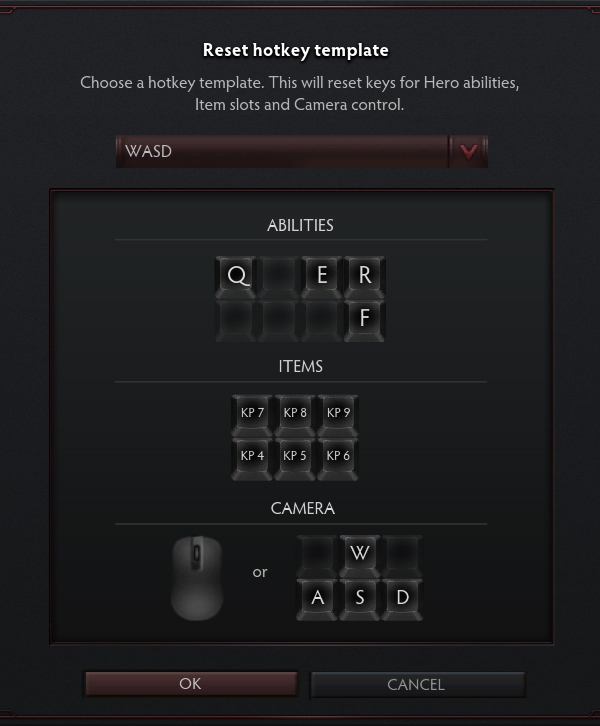 If you’re not a DotA veteran, I strongly suggest using the 1, 2 or 3 combination. Legacy hotkeys are for people that are so used to hotkeys from W3 DotA that it would be simply too hard for them to convert to any of above combinations.

Now, to the more advanced things:
Most of the people set their hotkeys to their hero spells and inventory, and that’s it.

In my opinion, if you want to play better and waste less time, you SHOULD have hotkeys for:

1. Quickbuy – allows you to buy an item that you “shift queued” instantly. Insanely useful when waiting for important items like bottle.
2. Purchase sticky – In your settings you can select one item that can be bought after pressing this hotkey. The most useful one is probably tp scroll.
3. Control groups – at least 3
4. Courier, all courier commands – tick “mirror hero hotkeys” in your settings
5. “Missing” – message to allies, really useful in pubs
6. Binded camera position hotkeys (rune spots)
7. Scoreboard – for constantly checking enemy levels
8. Shop – no further explanation needed
9. Show names/hero icons on minimap (default alt)
10. Commands: stop, hold position, move
11. Glyph

When changing hotkeys you know you’re gonna fail a lot, but what matters is the final result – you playing faster and more effectively.

For those unfamiliar with camera binding, the commands are:

This site may change ” <- this symbol to ″<- this and the command won’t work. Make sure you change your quotation marks back to normal before you put these commands into console.
What hotkeys do I use?

I started playing DotA quite a few years ago so I used to use legacy hotkeys. I weren’t really comfortable with them on some of the heroes so I installed “W3 keys” – a program that would allow you to change your hotkeys to any custom combination. I’m not entirely sure why, but I’ve chosen ZXCV and I’m happy with them.
My hotkeys:

Select courier: `  [courier actions set to use ZXCVDF too]

That’s it for today. I hope my post answered at least some of your questions : )

I would also like to thank everyone commenting and reading my guide to solo mid. The amount of positive feedback I received – both from pro and casual players is overwhelming.