I’ve gotten quite a few requests from Devoted Clerics on my server to make a guide to show how I personally play the class, so I’ll do just that – I’ll start with a short presentation of myself:

My name is Kross, and I play on Mindflayer server. I’ve played since the open beta started – and Devoted Cleric has been my main class since then. I’ve done Castle Never probably more than 100 times by now and I’ll use this instance as a example for my tactics/build. My current Gear Score is 12,806 and I’m sticking to the Prophet Champion set aquired with the Gauntlgrym coins (will explain why later). My defensive/offensive enchants are all rank 10, I’m currently working on upgrading the utility enchants from rank 9 to 10. I got perfect Soulforge and Holy Avenger. 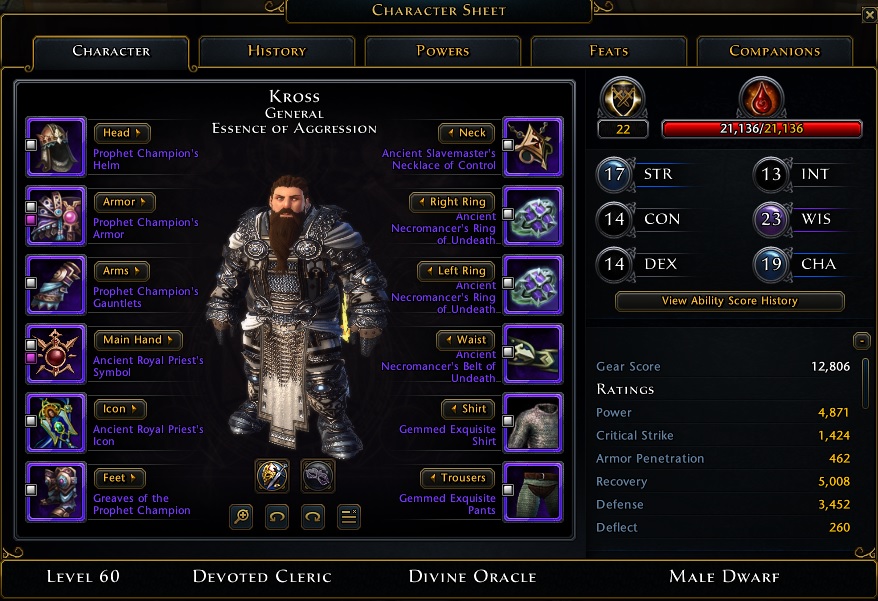 In my opinion the only instance worth doing is Castle Never, even if it’s Dungeon Devles time. The reason for this simply because this is the instance that seem to earn me the most amount of Astral Diamonds – by far. This dungeon is only suited for the best geared players and require a minimum Gear Score of 9300 – You will also often find yourself in a group that desire to just run with one Devoted Cleric in their team, because of this I decided to go for a defensive build – a nice second reason is for a tanky PvP experience.

Based on that decision I started gathering defensive stats from wherever possible, this is why you’ll see me using Ancient Necromancer’s Ring of Undeath x 2 – this ring comes with a defensive socket. So does the belt version “Ancient Necromancer’s Belt of Undeath“. The ring is also used on my companion – a Ioun Stone of Allure – because this companion grants the owner 100% of its own stats. All together my defensive stats grants me a 33,9% damage reduction from enemies. I’m also using an “upgraded” (thru Feats) Foresight that grants me an even higher bonus. This is how my feats looks like: 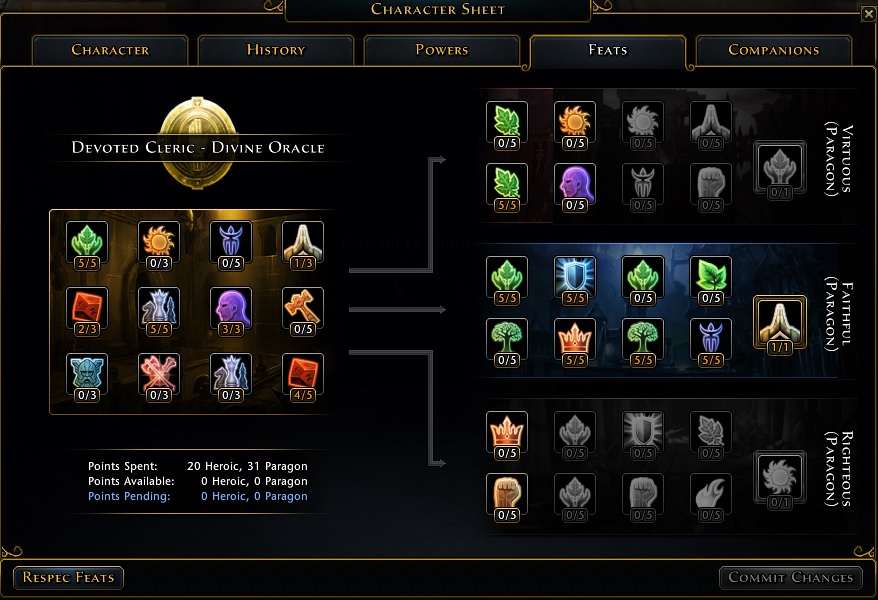 Chosing my feats I decided to go after anything that would increase the number of healing done in my dungeon runs, as well as feats increasing the divine power gained and feats giving defensive bonuses. Divine power is, in my opinion, a underestimated healing tool – no matter how your build looks like it will be effective with fast gained divine power. With the Prophet Champion set bonus I gain 25% more DP, and mixing this bonus with the Bountiful Fortune feat you can gain an additional 15% – I chose to just put 4/5 in BF because I wanted to have one point in Cleanse. With this high amount of gained DP, AND with my extra dot of DP from the “Greater Divine Power” feat I rarely run out of the opportunity to cast Healing Word in Divine Mode. Healing Word, as probably most of you know, has a very short cooldown in Divine Mode and can basiclly be cast as much as you want provided that you have the one “dot” or more available to cast it.

Another thing I chose to do with my feat points was to put some of them in “Deepstone Blessing”, which is designed to work with “Sacred Flame”. What Sacred Flame does is – on the third strike casting it – giving temporary hit points to any friendly unit in the party near the target. And by putting 5/5 points in the Deepstone Blessing feat you do an additional 10% more healing on targets affected by temporary health points/Sacred Flame. With the second part of the set bonus from Prophet Champion (giving 5% more healing) I’ll have the opportunity to do an additional 15% more healing on my party with a little skill. My “Healing Word” cast in Divine Mode personally heals a minimum of 5K on my targets, but let’s say just for the example of it that it would give a minimum of 4K – this with the additional 15% more healing would give 600 more healing to your targets. Having almost an unlimited amount of Divine Power combined with 15% more healing and Healing Word and at the same time having a minimum of 33,9% (unsure how this stat works with Foresight) damage reduction from defense…I can only say I LOVE being a Devoted Cleric.

Now let’s take a look at my Combat Powers: 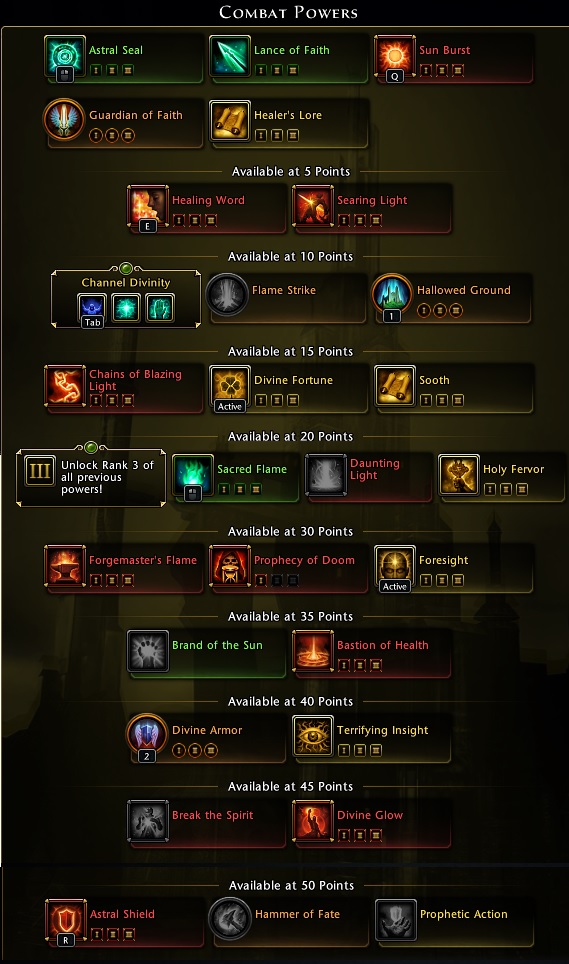 Most of these points dosn’t really matter for my build. One important thing though is to put max points in “Divine Fortune” which is the second Class Feature I use, next to Foresight. What this CF does is giving me Divine Power from my healing spells (with my intention of this mostly assigned to Healing Word). Besides this I’d only say it’s a must (for my build that is) to put full points in Hallowed Ground (1), Astral Shield (R), Divine Armor (2), Astral Seal (Right Click), Sun Burst (Q), Healing Word (E) and Sacred Flame (Left Click).

Then let’s take a look at how I do dungeons with this build – using Castle Never as the example. With such a high amount of defense the normal adds won’t be an issue. They can hit on you as much as they want but with your healing combined with the tanky setup they will hardly do any damage. However they WILL do damage to the average party member – this is why I tend to use Divine Armor (2) in fights with a high amount of normal adds. What this Daily Power does is increasing “Damage Resist” – making the squishy party members better equipped against gangs of adds as well giving them temporary hit points (which of course then with the Deepstone Blessing feat as mentioned earlier will increase the healing done). It’s also fights like these that made me chose to go for the Holy Avenger weapon enchantment – which will give the party even more damage reduction (an additional 15%).

For fights with fewer, but maybe tougher, adds or bosses I tend to use my other Daily which is Hallowed Ground (1), what this Daily does is originally just giving a small amount of damage reduction – but more importantly with the “Moon Touched” feat also give any party members standing in the affected area back 5% of their maximum health back every 3 seconds. This is a crazy amount healing done, especially due to the long lasting effect it has (around 17 seconds). It’s not rare that I have enough Power Points to cast yet another Hallowed Ground once the previous one has ended. 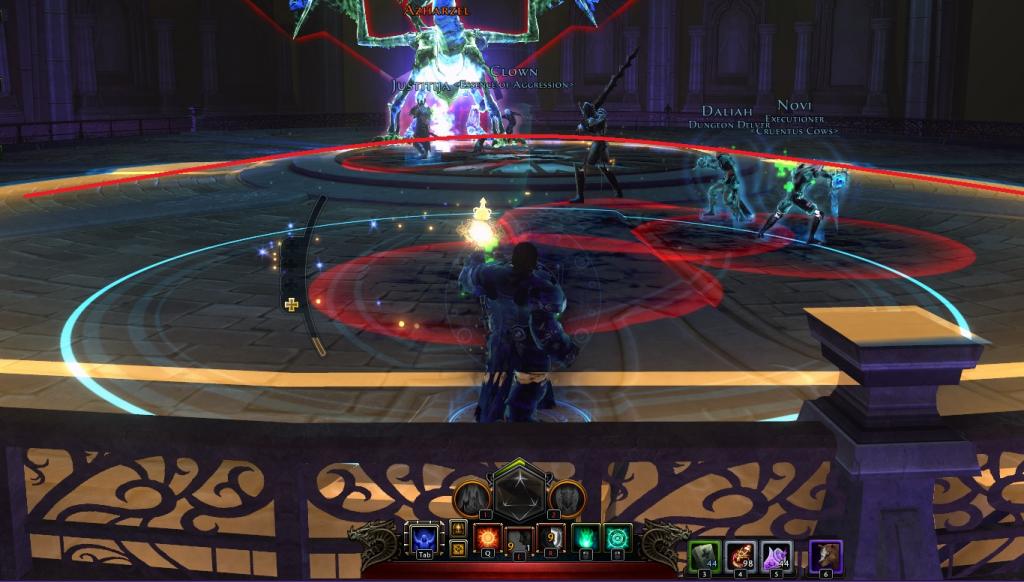 You’ll also see me using the Astral Shield (aka Blue Circle) in the picture. I tend to keep this Shield just for the Control Wizards in the party at the last boss fight in CN, but also for other classes during previous bosses in the dungeon.

Sun Burst is a Combat Power I haven’t talked much about so far. The main reason I keep this ability in my build is due to the knockback effect it has in Divine Mode. Sometimes during boss fights I try to keep the adds away from the other party members, but I also use the ability to knock off adds from bridges as well as players in PvP. It’s a nice little ability to give me a couple of seconds of free time to build Divine Power or anything else I should want to do. It does also come with a nice little healing.

This is all I have for now, but I will keep coming back to this guide to add more tips and hints, or/and to answer possible questions. Thanks for reading!