Hiya~! The Wagon is calling out to all you aspiring demonslaying hunters! As the job description of hunters say, we’re able to pick off enemies efficiently, and quickly. So what does this mean? COMBOS! That’s what.

Not so sure what good a combo would do for you? Well it’s quite simple. Really.

You’d want to set your skills on the hotkey bar so you’re comfortable with them. I personally use:
1. Default, 2. Firerain Landmine, 3. Corrosion Bomb, 4. Three Bursts, 5. Silence Landmine, 6. Electric Cloud (Save this for when you see 900+ combos), 7. MP Potions, 8. Shine Dance, 9. Fatal Shock.

Getting combos is easiest when you are within the lvl43-lvl51 range. This is mainly because the monsters around those levels are easy to kill, and respawn fast. (Have you tried getting even 700 in a lvl50+ map? It’s not fun.)

Before the question “where?” pops up, I’ve provided you with screenshots on some good places to be. 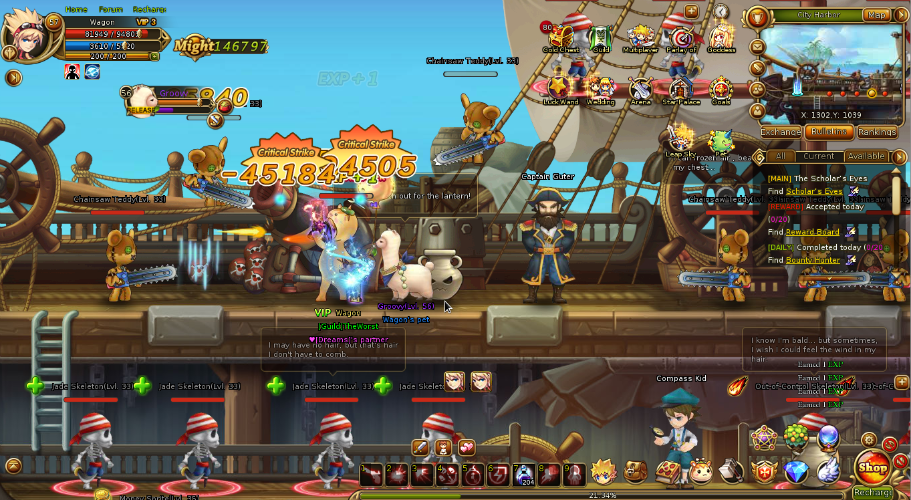 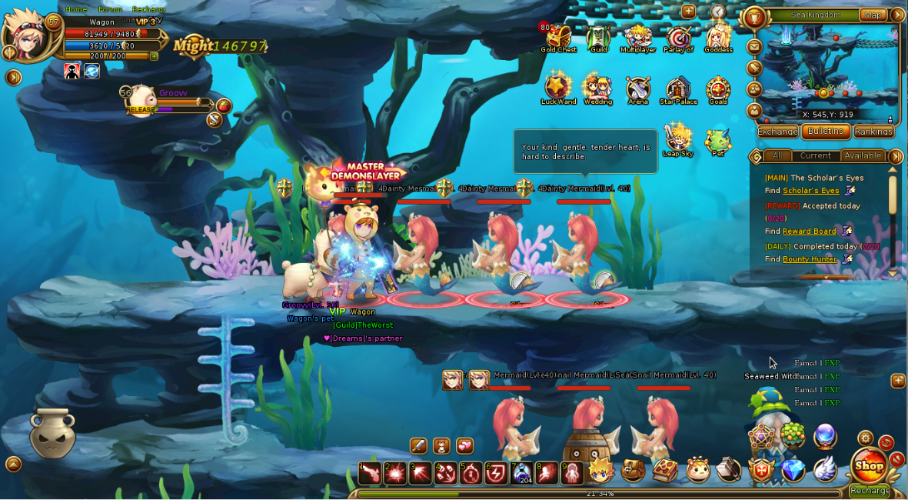 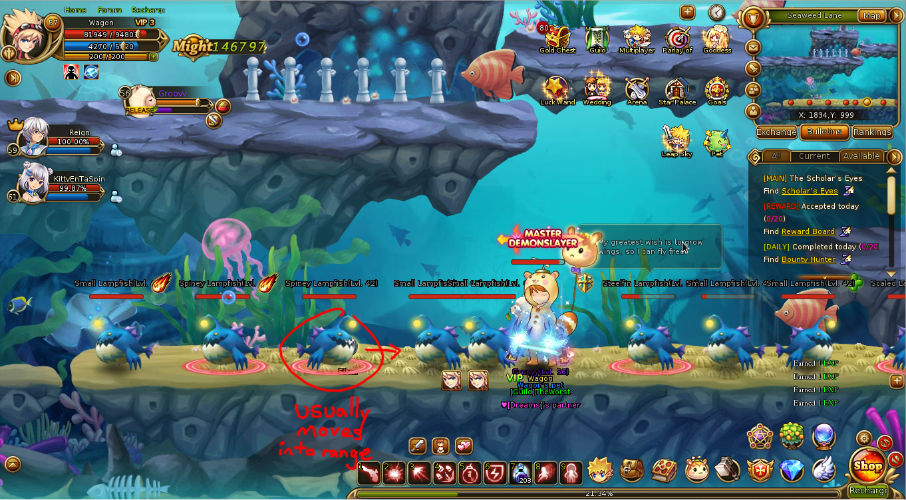 The Fish that is currently circled does not stand around and wait for you to kill it, it will move around, so this place will involve you moving around a bit.

Now that we’ve cleared up on some good locations, it’s time to talk about the real deal.

Some background about the combo system. As your combo grows larger, the faster the gauge depletes. So it’s better to be informed about what you’re going to do before jumping right into it.

Now I know you’re all lazy chumps*, or have other stuff to attend to, so you can’t play Lunaria Story all day. But that’s OK! Because here’s what you can do, for the easy 900**. It’s so easy, you don’t even need to move for this.
*As am I. Hehehehehehe
**The highest I’ve gotten with this method is only 902, but it will get 901 more often than not, given no one is there to disturb you.

1.) In the above locations that I’ve revealed, wedge yourself in between two mobs, so you have 3 targets in front of you. (You’ll be on top of the fourth one.)

If you’re not sure about what I’m talking about, try this.

This happens. You kill two mobs with one attack.

2.) Position your character so your attacks are in the direction of the mob. (I will not tell you how many times I shot the wrong way.)

3.) Have something hold down your default attack. Or hold it down yourself, whichever works.

Hunters have a relatively short cooldown on their default attack, so it’s completely fine to just do this. You might say using Auto-Mode is better, but Auto-Mode will only use skills, which have a longer cool down.

If the easy way is too easy, and you want a challenge! Then I have a challenge for you!
(Or if you’re lvl53 and none of the locations will do you any good anymore, then you’ll have to do this……… sorry.)

This way involves the slasher king instance. So you’re limited to only one attempt a day.

Before I begin, here are some recommended stats for you to have, so you don’t attack me over not being able to kill the skeletons in one hit.
OH! And a little background info on the instance, and how we’ll do this.

Minimum Attack: AS HIGH AS YOU CAN GET IT (I can not stress this enough, you NEED to be able to kill the skeletons in one hit.)
Maximum Attack: Your level x 800-1000 (This is so you have a higher range, which in return gives you a higher average damage per hit.)

Now the instance is fairly simply made. You start on a platform, below you are 10 skeletons, there is a little crystal that will go away after 1000 kills are made, then bosses to the right of the crystal. It looks a little something like this.

[y] = you
[m] = skeleton (Same level as you)
[p] = portal crystal (Just an obstacle, you can jump over it if you like)
[b] = bosses (There are seven of them, each progressively harder than the last)

With that being said, remember Tip# 1? Keymapping. That’s right.

What you want to do here is make sure you’re killing comfortably until around 780-800 combos.

Here’s what to do.

1.) Position yourself into the middle, so you’re in between both sides of skeletons, then lob a Firerain Landmine to the right. 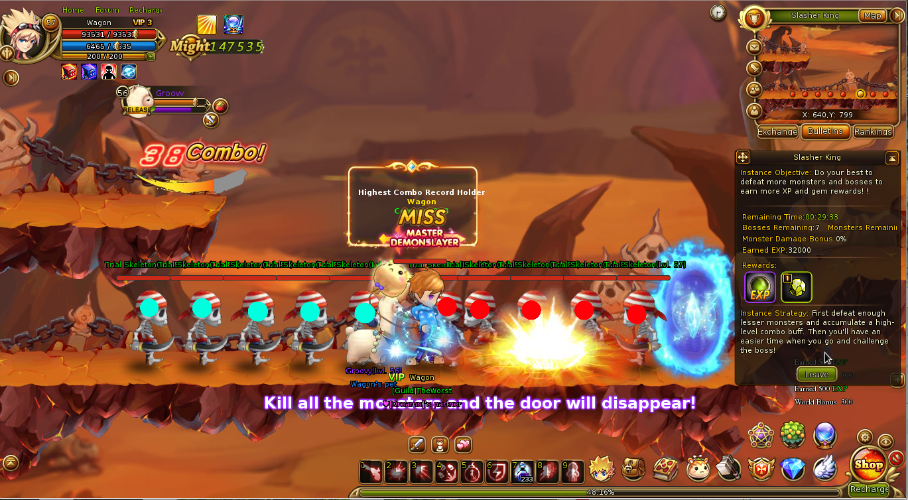 Make sure you’re closer to the right side so the bomb will kill at least 4 of them at once, if not all.
Fire a Default attack to kill it off if you see one.

2.) Next, move in closer to the left, then fire a Three Bursts into the crowd. 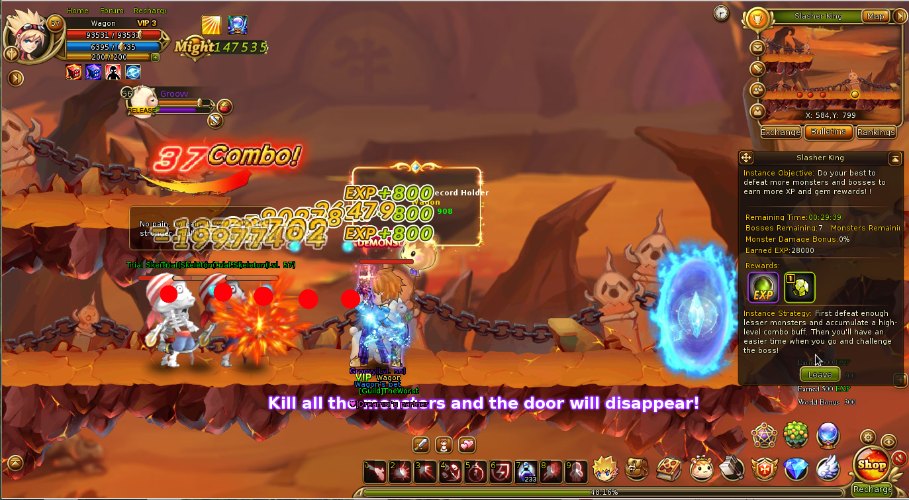 3.) Now you’ll have to act fast (especially at around 700) since there is usually one or two mobs left over after Three Bursts, fire Default Attacks to pick them off.*

*You can skip this if your Three Bursts kills all 5 at once.

4.) Rinse and repeat UNTIL you get to 799+ combos. This is where the fun truly begins.

5.) You will now have to stop using skills, and rely on default attack.

It is better to try killing only 4 of the 5 mobs on one side first, then turning and killing all 5 on the other side, then returning to kill the last mob. This is to make sure if you ever make a mistake, the mob you let live will get hit, instead of you shooting into the air.

FIRING TO THE RIGHT UNTIL THIS HAPPENS

Then move to the left.

Unload on these five.

Then shoot that last one standing.

Warning: You will sometimes kill two mobs at once, so do be careful.

6.) The moment you see 898-899, lob a Firerain Landmine into the crowd followed by a Three Bursts the other way.

If you overkilled and see 900, fire an Electric Cloud or Three Bursts instead of Firerain Landmine, because the landmine has a slower casting time.

After this, there isn’t really much you can do, because once you reach 900 combos, the gauge depletes in the blink of an eye.

And there you have it! This method got me 908 combo, and the VERY shiny MASTER DEMONSLAYER title on the server I play on.

Here’s a screenshot of me getting 905 combo. 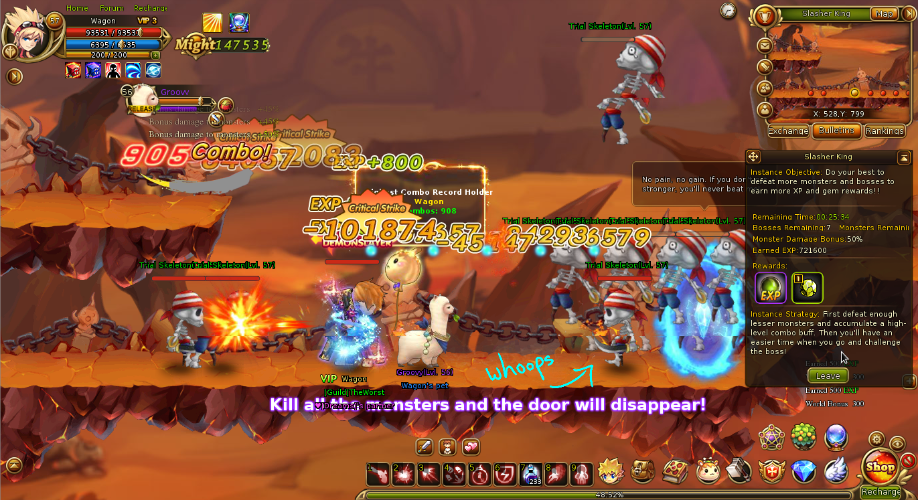