Kingdoms of Camelot Guardians and Shop Items Guide by BadOmen

There are four different Guardians that you can employ in each of your cities that not only increase certain troop stats, but also give you a boost on a specific resource’s production. However, only three of those Guardians actually affect troop stats:

One thing you will notice on your battle reports is that you will see “Defense” listed under your Guardian Bonuses. This is a “typo”. There is no Defense bonus from Guardians, this is you LIFE bonus.

Another thing to note is that you won’t see the bonuses ALL the time. The Ore Guardian’s benefit will only be applied while you are attacking and the Wood Guardian’s bonus is only applied while defending. The only time you will actually get an Attack and Life bonus from your Guardians is with the Set Bonus, for having all four guardians in the same city. At which point you get an extra 50% bonus on the active Guardian as well as 50% of the bonuses from the inactive ones.

So…to make it simple, if you are attacking someone else, summon your Ore Guardian. If you are defending against an attack, use the Wood Guardian. Other than that, I usually have the Stone Golem on for the troop training bonus. I go through a lot of troops, so any extra help I can get in replacing them…the better!

As far as your troops’ stats go, the Guardian Bonus is the only one that is NOT calculated directly from the BASE stat. Instead, it is calculated after all other bonuses/debuffs are applied. So, your opponent’s Throne Room does indirectly affect your Guardian Bonus.

Here are all the Guardians and their respective bonuses per level. 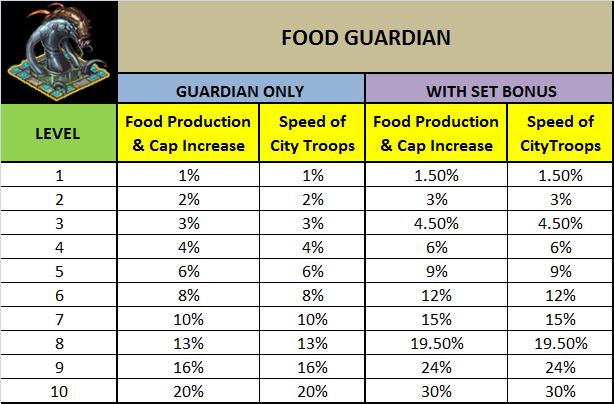 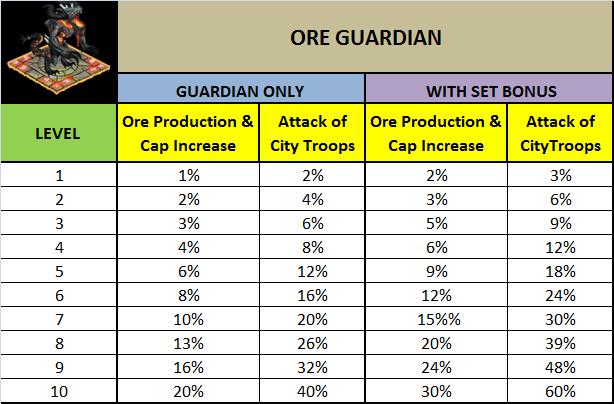 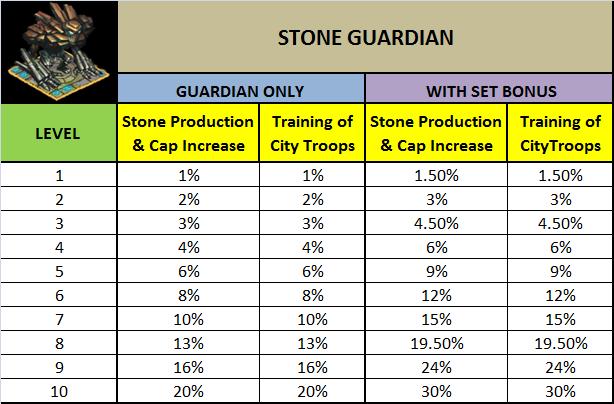 SHOP ITEMS
As far as the Shop Items go, there are six in total that you can get to increase the Attack and Defense stats of your troops. They vary in bonus amount and duration, but the bonus is calculated directly from the base stat of your troops prior to any bonuses/debuffs being applied.

Increases the ATTACK of your troops by 20% for 24 hours

Increases the ATTACK of your troops by 20% for 7 days

Increases the ATTACK of your troops by 50% for 4 hours

Increases the DEFENSE of your troops by 20% for 24 hours

Increases the DEFENSE of your troops by 20% for 7 days

Increases the DEFENSE of your troops by 50% for 4 hours

I guess since we are discussing Shop Items, now would be a good time to discuss Knights and the role they play in your troops’ stats. After all, any time you go to send an attack out…right above all those Attack and Defense items there is one for your knight; the Gauntlet of Courage.

Increases a Knight’s Combat Skill by 25% for 7 days

But, how does that affect your troops in battle?

Well, just like everything else involved in combat, your knights have their part to play too as far as your stats go. Knights, being the masters of battle that they are, add bonuses to both your ATTACK and DEFENSE stats.

The amount they add is determined by their Combat Skill level.

The bonus you get is equal to half of their skill level…turned into a percent of the base stat. I know that sounds confusing…I just confused myself as I read back over it…so, let me just show you how it looks in equation form.

So…you can see why the Knight you send along with an attack is REALLY important.

With a Combat Skill of 255, you are getting a 127% bonus to your Attack and Defense stats for all of your troops. Not too shabby, huh? And yes, you may as well just round it down to the nearest even number…255 is really no different than 254 as far as the game is concerned.

Get out there…smack around a few low-level Dark Forests for a while and get your Knights’ skill level up as high as you can. They play a MAJOR role in combat and you don’t want to lose a battle because you had Elmer Fudd leading your troops instead of Rambo!!

One other thing I would like to mention is that when you are attacking another player, Barbarian Camp, Dark Forest or Wilderness…you get an additional 20% Bonus to the ATTACK stat for all of your troops. I haven’t been able to get a “reasoning” from Kabam…but, the nearest I can figure as to why it exists is that they are trying to compensate for the fact that you can’t bring your wall defenses with you and will be facing the enemy’s. Not sure…don’t quote me…that is just the only reason I could think of for it.