Information is power. In some cases more literally than others. The most valuable commodity in the galaxy is technology, in the form of Universal Template Construction schematic-cores which allow standard manufacturing technologies to produce the most powerful and advanced ships and modules Maelstrom has ever seen.

It will come as no surprise of course that the data in these files are also some of the known-universe’s most closely guarded secrets. Obscured by deep encryption, segmented and stored in distributed archives, the desire to secure it has driven generations of revolution in software engineering and hardware security alike.

The acquisition of blueprints would be simple if not for the extraordinary security measures employed to protect them. Q-String based encryption renders them all but impossible to simply copy and at the same time all but impossible to destroy, forcing those who would acquire these technologies to physically capture them from their enemies.

Players have a chance to acquire a blueprint fragment whenever they win a battle, though the chance of finding one is reduced (to as little as zero) if the winning fleet has a significantly higher rating than the losing base or fleet. When attacking a base, players can increase their chance of finding blueprints by taking out their opponent’s research labs. 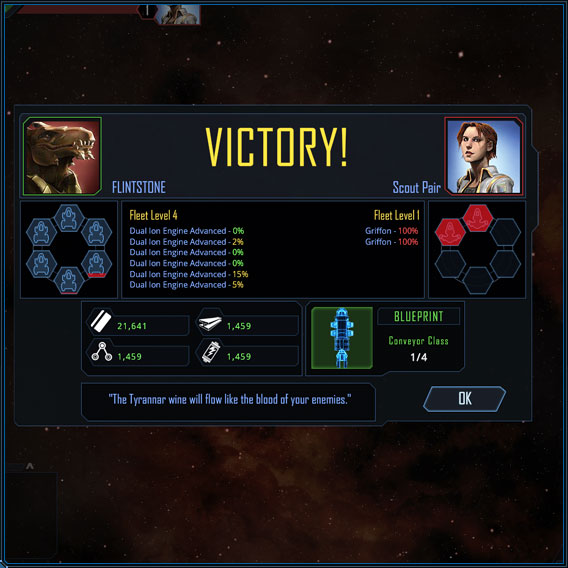 The first fragment of an uncommon transport hull blueprint recovered in battle.

Some blueprints are more common than others – the Uncommon, Rare, Epic, and Legendary rarities are routinely color coded throughout the game for your convenience – and players are significantly more likely to find fragments of more common designs. Owing to their complexity, rarer designs are also composed of more parts, and rarer parts can only be found on more advanced bases and fleets:

Since June 1st, you may now find Advanced Tech blueprints on the lower tiers of enemy NPCs, and all require only two parts to complete.

Players can have a maximum of eight partially complete blueprints at any given time, and once they reach that limit they will receive only fragments of those already in progress. Though some parts are rarer than others, this will not affect the overall chance of finding a fragment however, it only influences which fragment will be recovered when one is found. 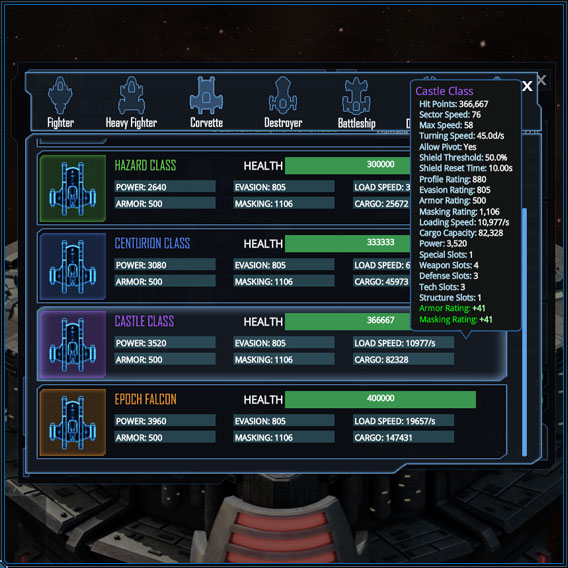 Blueprint corvettes with the special bonuses of the Castle class.

Additionally, once a player has acquired one or more fragments of a particular blueprint, he can tap his palladium reserves to acquire the parts he’s missing, one at a time or all in a batch. Acquiring all the remaining parts of a blueprint as a batch offers a modest discount as compared to buying them individually.

Once acquired, blueprints work much like the technology you research in your labs, and like research they may require you to complete other, related upgrades to use, but once you’ve acquired the parts and met the prerequisites, you’re all set. They don’t require any research time, so once you qualify you can immediately start using them to outfit your ships and base.

Your progress on any given blueprint can be tracked in your lab’s research windows, where they are listed with the standard modules they derive from. Once unlocked, your new ship hulls will automatically appear in the ship selection screen, and new modules will show up on the appropriate module selection lists in the ship fitting view. A filter has also been added, for your convenience, allowing you to show or hide your blueprint tech. 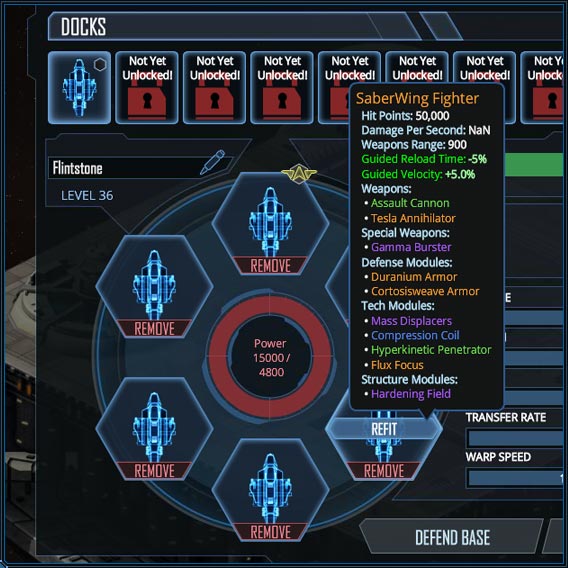 A fleet of legendary Saberwing fighters with various blueprint modules.

In addition to the other bonuses they provide – greater basic benefits and special bonuses specific to each blueprint – blueprint modules use more power, so in order to outfit your standard hulls with blueprint gear you’ll have to make some tough choices. Blueprint ship hulls offer a higher power allotment however – along with their other bonuses – so they’re critical to developing the maximum potential of your fleets.