Age Of Wushu:
The historical origin of Shaolin started in 464 CE, Batuo, a Dhyana Master who came to China from India to spread Buddhist teachings, saw that Mount Song resembled a lotus flower and wanted to establish a Temple within the “flower”. The Emperor agreed to build a Temple to worship Batuo. The Temple, located at the bottom of Shaoshi Mountain, is covered with lush forests (Lin). So it was named, “Shaolin Temple”.Shaolin excel in external skills, and many of its disciples have become great masters in the world. The Shaolin uphold righteousness, and have a good reputation with the common people of China.

Master Xuanhuai: The Abbot of Shaolin. He frequently reminds his disciples to help others, spread kindness, and assist in rescuing people.
Liaoyin: The Leader of Discipline Hall. He is from a noble family, and is very strict with his disciples.
Liaochen: The Leader of Bodhi Hall. He comes from great poverty and is the most pious of all the disciples, as well as the most respected elder.
Kongshan: A Monk in Arhat Hall. Until he found the Shaolin he once a lead a group of bandits. He is straightforward, likes to laugh, and eat heartily.
Jueneng: An usher in Shaolin Temple. Found on the steps in front of the gate, he has never left Shaolin and is very friendly, he always smiles at all who journey to Shaolin. 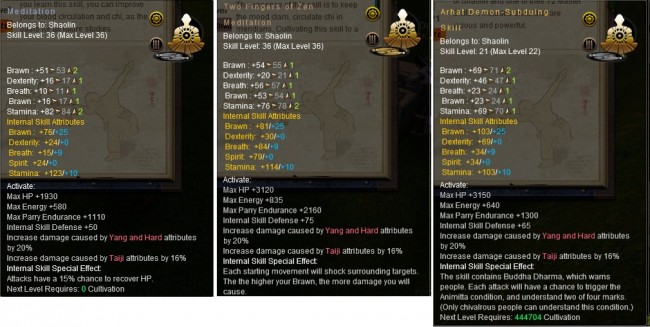 Shaolin 1: attacks has a 15% to recover small amount of health. (At lvl 36 it will recovery black hp, other wise only yellow hp)

Shaolin 2: attacks deal additional damage to nearby targets, based on brawn.

Every hit causes the user to enter “Super Saiyan”mode with a 30% chance. A random SS level will be chosen with a 20% chance for all four.(Only the righteous may enter all four) Duration of 20 seconds and cooldown of 90 seconds
“SS1” State: Every attack deals an additional 57 damage
“SS2” State: Ignore 13% of External parry/reduction. Ignore 13% of Inner reduction.
“SS3” State: Ignore 10% external defense and Ignore 10% internal defense.
“SS4” State: Increase critical hit chances by 26% Increase critical hit damage by 50%.

Twelve & Thirteenth Level Quest
Wait for the quest giver to actually show up if he’s not where the autopath goes
Go to Wudang
Talk to dude, fight dude.
Talk to Xin Xiaohui (493, 865)
Go to the waterfall at (486, 976), pick up the medicine bottle in this cave. Triple jump up toward the waterfall again to leave.
Talk to Wudang headmaster then talk to Shaolin headmaster.

Fourteen & Fifteen
In a Shack; bucket and water are right next to each other and the shack
In a Tree; fall (directly above coordinates, you can talk to him from the opposite branch)
Second Level (difficult to see on minimal settings)
START GETTING YOUR REPUTATION LEVEL UP – YOU WILL NEED REP LEVEL FIVE FOR LEVEL 19 QUEST

Nineteen
!! You will need Reputation Level 5 to enter Mount Song Sword Sect and complete this task !!

Twenty-Four, Twenty-Five, Twenty-Six & Twenty-Seven
Run around like an idiot following the co-ordinates and talking to people.

Simple, bring a group when you get sent to the Monk at GCC again for a boss fight. The boss has tons of health but can be stun locked. Solo-able with arena pills, but tedious. This mini instance is not actually inside GCC, and does not count against your weekly limit of forbidden instances.


The trapdoor you’re looking for is on the front side of the brothel, buy an arena health pill before you go down as you have to fight a weaker version of the previous boss solo.

DO NOT GO BACK UP THE STAIRS ONCE YOU HAVE GONE DOWN WITHOUT KILLING THE BOSS YOU WILL FAIL THE QUEST AND LOSE 20 TOKENS.

Block energy +4950, under attack has a chance to reduce incoming damage by 32% and get a buff: when attacked – has a chance to turn some black hp into yellow HP, when buff reaches 4 stacks – turns 50% of yellow HP into red HP.

Shaolin Skill Sets
Each skill set has its pro’s and cons.

To break it down a bit.

2) Most shaolins will learn this style and rely on it heavily for their PvP (1v1) duels.

3) Slow in the beginning and weak against long rangers, need goose (flying skill that drops in twilight) in order to compensate.

4) Considered the best single target fighting style we have.

Bhodidharma’s Stick (2nd skill set, you get at lvl 5 meditation)

2) PvE set mainly. This is for your mobs, or Guild wars. Basically against multiple opponents.

3) Hard to use in duels but fun to use against multiple opponents you will especially love it when you fire your rage off and send everyone flying then you juggle them by casting (immediately) Myriad move (spin) keeping them in the air.

Weituo Stick (3rd skill set, you get at lvl 10 meditation)


1) Arguable the hardest to learn.

2) Meant for PvP, is suppose to be used against opponents who run away or are rangers.

3) This skill set is all about making you fast and slowing your opponent down to a crawl. It will be hard to learn but once you’ve mastered it you will probably be one of the very few who learn it making you unique among your brothers.

4) Some also use the block breaker in PvE situations since it does more dmg, and has a faster cast time.

****Side Note****
To attain higher level school skills (level 6-7) One must talk to
Zu Yun(School Position War) Located @ 827, 383
IMPORTANT: Make sure to ACCEPT the missions it asks you do in order to get credit for them.

Suggestion
Pick boxing or weituo as your style early on. Then focus on working that as your PvP set. Bodhi is second (for PvE and war sake), and then lastly whichever you left behind. As I said before most shaolins will go with boxing first because it’s the easiest to learn. it also has nice area control but you will surprise your opponents if you’re a weituo master. 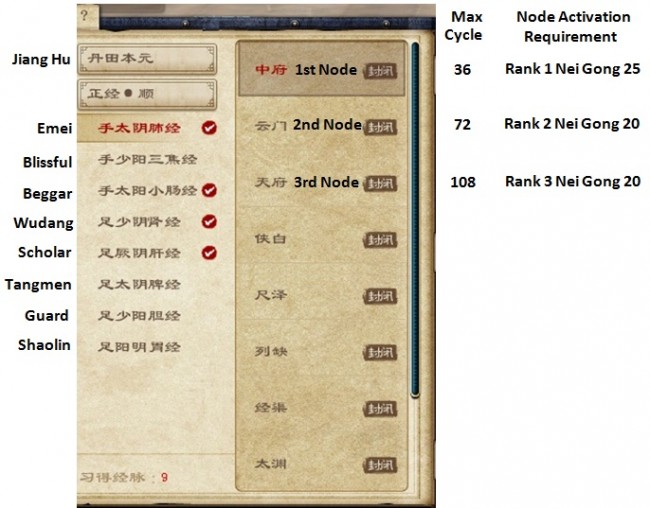 Suggestion
Go with Yang/Hard type of meridians (Beggar,Royal Guard, Tangmen) so that you your personal inner (which is yang hard) gets a boost in that direction. Of course you can choose 2/3 of these and add a inner type to boost mana or spirit, whatever you feel is necessary.

Random
Q: “Isn’t there already a guide section in the forum?”
A: Yes there is, but this is specfically for shaolins. Also this allows other shaolins to simply link this forum page for any noob question they encounter in the shaolin forum they find.

Q: “Won’t this get really long?”
A: …Yes. Lol, but i’ll specifically only answer “shaolin” related questions. So this isn’t for any other school it’s just for us. (although others are welcome to read).

Q: “Are you just making up questions that you believe people will ask in order to save yourself some time?”
A: …Maybe?

Inners
Q: “When can I get my 2nd/3rd Inner?”
A: Level 30 minimum of the previous inner you had. Talk to Abbot for 2nd inner; for 3rd talk to Liaoye.

Q: “For the shaolin third inner, what does it mean when you get the Annimitta condition and ‘understand 2 of 4 marks’?”
A: To my understanding that means you have the possibility of activating 2 of the 4 special buffs while dueling at the same time (even though it’s only a possibility most the time you will only get 1 out of the 4).

Q: “Are the Blocking/Parry worth leveling?”
A: Personally ‘Blocking Horse Step’ is not worth leveling. I have a max ‘Golem Subdues Evil’ for the sake of guild wars/school wars/pve but even then I don’t use it all the time. My bread and butter parry would be ‘Shoes Worn On Yellow Stone’ for the sake of speed, so that players who are rangers or runners can’t get away.

Q: “How do I get Bodhidharma staff set and Weituo (2nd and 3rd skill set)”
A: For bodhi be level 5 meditation (inner) and complete your main story line (the one where you started out in the city) and talk to Zu Jing. For Weituo get to level 10 inner and talk Zen Master Zu Cheng.

School Identity Ranking
Q: “Is there a difference between Bodhi path or the Arhart path?”
A: Currenlty the only difference between the two paths is the method in which you need to take to move in the school “ranking”. Bodhi requires more “reputation”, while Arhart requires higher “levels” in your internal skills (meditation, two finger zen, ect…)

Q: “Wait why can’t I get ‘Dharma Hall Faquir’ it says something about ‘Arhart Demon-Subduing Skill reaches Level 4’?”
A: According to our Shaolin brother torabas_mnw that means you need the Shaolins 4th inner to be at level 4 before you can attain that title.

Shaolin v. All
*Mostly a perspective from Long Boxing.*

Q: “How do I counter Wanderer’s silence?”
A: Um, your best bet is to use goose. This will allow you to get out of their attacks even if they silence you. Keep goose around (mix in running so you don’t run out of goose) and set up fient (parry break) and fire it whenever they try to get near you.

Q: “How do I counter Royal Guard chain?”
A: As a Shaolin you are at a disadvantage when it comes to long range fighters. Personally I would have “Fleeing Steps” from boxing ready and keep your guard up. Try to stay “relatively close” (1-2 goose dash away from being on top). Wait for them to parry break dash the minute you see the animation and get on top of them with boxing. You could also use weituo but the mastery of that is tough to learn at first but useful against those who try to run away from you.

Q: “How do I fight against a Wudang hp/mp swap?”
A: Be aggressive. Don’t lax up at all. Press your advantage and even if they swap keep pressing. Also be aware of your MP (as this is a weakness in shaolin boxing). It will drop quite quickly especially if you have strong moves but are low level. Also keep them chained (aka combo locked), if you can.

Q: “How to fight against Tangs darts?”
A: Early on everyone gets wrecked by Tang darts, I suggest the same strategy against them as the RG plan. But mainly it’s an uphill battle until you hit max 1st inner with goose or 2nd inner. Once the other inners come into play the darts do less dmg (as a whole) which makes you have a higher chance in rushing and dropping them.

Q: “How to fight against Beggars lotus palm?”
A: Defense, Defense, Defense, this is probably the most important thing I can stress. If you don’t block and they get you with their palm strike to the ground you can bet your going to lose at least half your hp in their combo. If they do palm strike and your blocking you can wait a split second and stun them allowing you enough time to super punch them.

Q: “How to fight against Scholar kicks?”
A: Scholar kicks are/will be the most annoying OP dps set in the game (aside from Tang daggers later). You basically will fight them like any other fight but try to guard when they do their combo kick (it will help you build up rage for your own special). To put their kicks into perspective Scholar kicks had to be nerfed multiple times in the CN version and are STILL considered one of the best pvp styles.

Q: “How do I fight against an Emie stun set?”
A: Like the beggar set, defense and counter is your best style here. Let them jump and try to stun you while your defending then use roar(stun) to allow yourself to charge your super punch. Be careful because the weakness to any counter is another counter. If you don’t do it right, your advantage could suddenly put you on the losing side of a duel.