Script stealing is a magical adventure that rewards you with skill books for other schools. Every night but Sunday two schools are chosen to be script stealing targets. If you are NOT a member of either school you can steal scripts from either! If you are in one of the two schools you can either defend your school’s scripts, or wait until your school runs out of scripts and then steal from the other target school.

The normal maximum number of scripts available to be stolen is 500 per school – during special events this number is doubled to 1,000.

Script stealing occurs every night EXCEPT FOR SUNDAY at 19:00 server time. It ends at 19:30.

You join by pressing N, then selecting the school tab, then choosing Steal School Scripts, and pressing join. You will be able to select one of the valid schools from a dropdown, after which you are teleported into the zone randomly with the script stealing task enabled.

* Where are the scripts?!

Each school has 4 possible spawn locations for the scripts. To find out where they are, once you’ve joined the event, press N, select the school tab and steal school scripts event, then press Details. You can autopath to the marked locations on the school map that comes up. Only two of the four locations will be active each event. 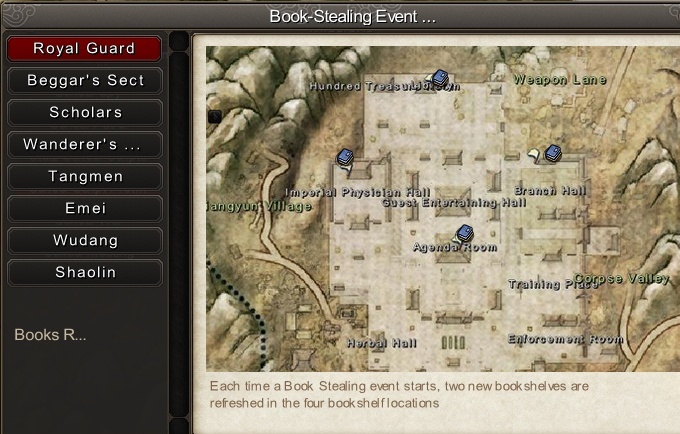 Once you find a bookcase at one of the locations, click on it to take a script. Defenders may be around and hostile. You can also find a script transporting disciple, target him, right click his profile, and choose steal.

Here comes the hard part! Now that you’ve got a script, you must leave the school zone. You can run out, horse out, or take a carriage out. As soon as you leave the zone the script on your back will vanish and you can return to your own school (via teleport or break meridians) and talk to the library watchman for the reward. If you die inside the school zone the script on your back will drop and your killer can take it.

Once you receive a reward you can immediately return to steal more scripts as long as they are available by talking to the library watchman and joining the script stealing event again!