A lot of people seem confused about meridians. It’s actually a really simple method of gaining extra stats and quite simple to use. Let’s take a look at the menu.

This seems daunting to comprehend all at once, so let’s take it one section at a time. Let’s start with the center page since it controls the meridians themselves. 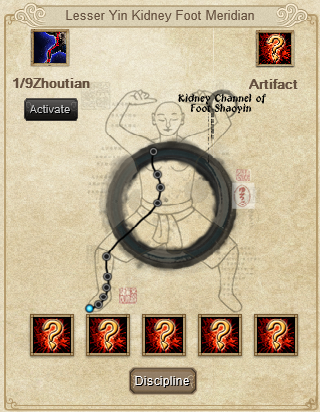 In the upper left corner is a little square icon, hover your cursor over it and a tooltip will pop up listing the bonus stats the meridian will give when activated by pressing the button right below it. At the start you will be able to have three meridians active at the same time. The leader of your school will give you a pill that increases that limit to four.

Between the icon and the button, we see some text saying “1/9 Zhoutian”. Zhoutian are the meridian’s levels, so this text means that the meridian is currently at level one and currently has a maximum level of nine. To level up a meridian, press the Discipline button at the bottom of the menu; the meridian will start gaining experience called Chi as you do things in the world. Chi can be earned from crafting, completing quests, running dungeons, and even from attacking things in the world.

In the center of this menu is a sketch of a man with a large circle and a dotted line overlayed on top. The large circle is a meter that shows how much chi the player has gathered; the circle will turn blue as chi is collected, once all of the circle turns blue the meridian will gain a level. Hover over the circle to see a numerical representation of how much chi you need (Another way to check the amount of Chi you need is to press the > button on the bottom of your character button, this menu also has a button that opens the meridian page in the skill book as well as your meridian’s level and the max amount of Chi you can accumulate in a day).

The dotted line on the sketch is a graphical representation of the meridian along the body, corresponding to the actual concept of meridians in traditional Chinese medicine. The dots on the line are the meridian’s acupoints, more on them later.

The question mark icon in the upper right has something to do with an item we haven’t encountered yet, so it can be ignored. The same goes for the row of question marks along the bottom of the page, there function isn’t in the game yet and so they don’t matter.

Now that you know how to activate meridians and level them up, let’s take a look at the columns on the left page and what they do.

The first column on the left page is the list of meridians you can equip. The eight meridians of the 13 Confuscian Scriptures Sequence correspond to the eight schools’ internal skills and Dantian Element’s meridian goes with the Self-Recollection internal.

How do meridians correspond with internal skills? Let’s look at the second column.

This is the list of acupoints along the meridian. As mentioned before, they are represented graphically on the other page. Note how they’re listed as closed. If all the acupoints on a meridian are closed, its maximum level will be restricted to nine, as seen before. Opening the first acupoint will raise the level cap, opening the second will raise it even further and so on.

Meridians with one and two acupoints open, respectively

How do you open an acupoint? Hover the mouse cursor over the first acupoint on the list and it will display a tooltip with its requirement: a sufficient level in a certain internal. 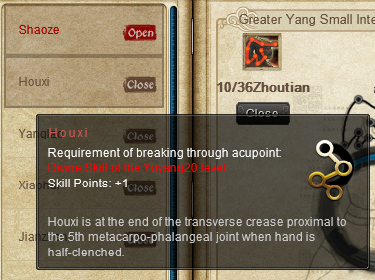 In this example, the second acupoint requires Divine Skill of the Yuyang, the second internal of the Beggar’s Sect, to be leveled to 20 before it will open. The first acupoint opened at level 25 of Mental Skill of Leisure, the Beggar’s first internal. The tooltip also mentions that when the acupoint is open, the player will gain a skill point. That skill point can be used on the rightmost menu.

This is the skill menu. The red bookmark at the top shows how many unspent skill points the player has acquired from unlocking acupoints. Next is a set of eight skill slots. The first skill slot costs a single skill point to unlock and each subsequent slot will cost twice as much as the one before. Once a slot is open, drag skills from the list below into open slots and click the Confirm button to lock the skills into the slots. Once the skills have been locked in, it will cost 100 Liang in coins to reset.

When a slotted skill is used, another skill from the same set won’t be affected by the global cooldown between attacks and can be used instantly. Hover over the skill icon to see which skill it is and which skill can be used after it. In the example pictured above, the feint attack of Wind Chasing Blade is equipped, allowing the set’s knockback attack to be used instantly afterward. Each of the schools’ skillsets has one move that can be slotted.

That’s all there is to the Meridian system. Keep working at them and grow stronger.