You have been playing the new Legend of Mount Hua update after 16:00 server time chances are you’ve seen a message that looks a little something like this.

This is from one of the three new world bosses who drop ancient fragements, rare jianghu internal pages, and tier 2 workshops. What the N menu does not tell you about these bosses is that they are summoned by players on certain days of the week. In this guide I’ll go over the details on the Ten-Thousand Year Old Fire Turtle, his moves, spawn locations, and methods of summoning.

Out of the three new bosses the Fire Turtle is the easiest boss both to summon and fight. Only requiring a large group of people to fight.

The Fire Turtle makes it’s home in the Northern Desert (also home to the forbidden instance, Longman Inn) and defends it’s natural resources. To summon him enough materials must be gathered from the mineral and herbal/poison nodes in the zone. If enough materials have been collected he will appear in the zone after giving the server a 30 minute warning.

When he spawns he will appear in one of several locations in the North Western part of the Northern Desert. 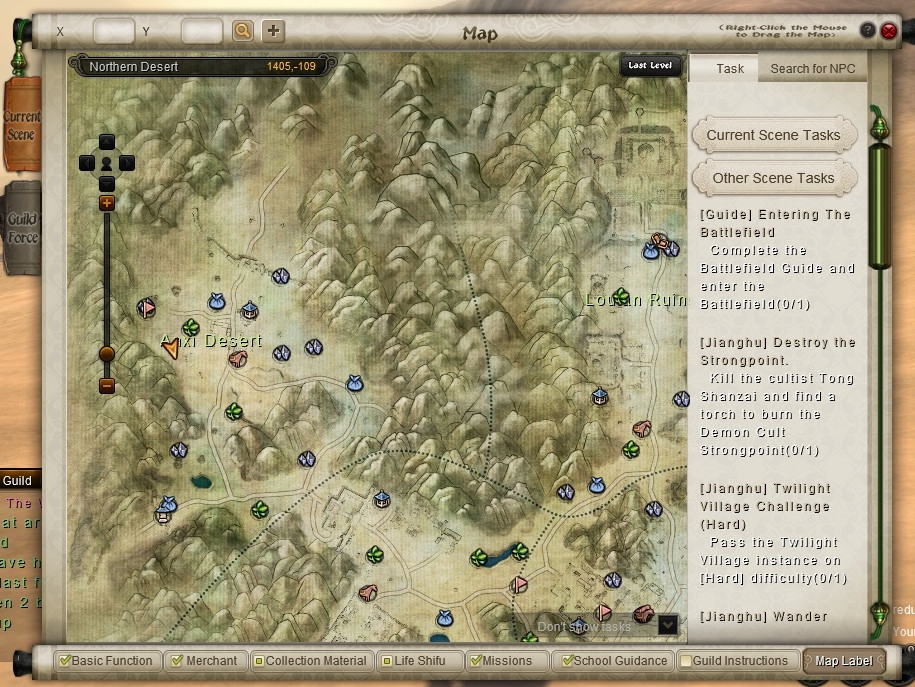 Anywhere with in the NW dotted line section will be his stomping grounds and he likes to move around so if you arrive to the zone late explore around the area as he may not be in the same place reported.

Finding him will undoubtedly be an easy task as he attracts many guilds and players so you should be able to follow someone else to his location. Once you find Mr Turtle the fight begins. Don’t let the images fool you he is a huge creature and seeing your damage done to him is almost impossible due to his height.

It’s important to remember that the Fire Turtle is mostly dangerous in close range combat. He has an immense amount of health and tough defenses. While he is slow to move and act keep in mind he has a few abilities that can still hit at range such as the Gush attack seen above. While using this move he will spew fire from his mouth damaging anyone in a cone in front of him. 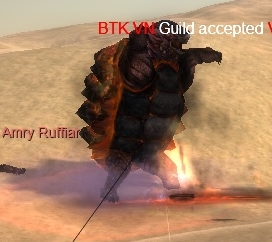 His second attack is his most deadly which is a point blank aoe ground pound. This will knock anyone around him up into the air and deal large damage.

The fight will continue much the same with these abilities until he reaches 50% when all of his attacks will be upgraded. Gush will leave fire on the ground in a huge area that deals large damage (note that it is common for the fire to become invisible and hard to see but the damage won’t be great unless you stand in it. If you find yourself taking damage just move until you aren’t.)

His second attack becomes the most dangerous as his ground pound is now followed up with a deadly spin attack. 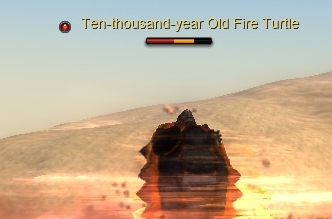 This attack is an absolutely gigantic aoe that will kill you if you are caught in it. Period. It last a tremendously long amount of time, deals multiple attacks, pulls you in, and knocks you around, all while dealing several thousand damage every hit. If you get caught in this you will be too busy being flung around the turtle to do any moves so don’t count on that Flying Horse to save you. He will telegraph his ground pound by rearing up so use that as your hint to get as far away as you can.

Ultimately this fight boils down to both a game of numbers and mobility. A small group of people is rather useless against his massive hp pool and damage abilities. Knowing his moves and working with a large group is your best chance at taking him down.

Only the group who scores the killing blow on the Ten-Thousand Year Old Fire Turtle will be able to loot the numerous pages, items, and receive the jade points for killing him. It is not a good idea to try to fight by yourself as the chance of getting anything out of the fight is slim against a full raid of people working together.

Always group up and fight together against a world boss or you will accomplish nothing but damaging your gear and losing money.