I had the (seemingly) unique experience of being online and in an eligible guild during the Gauntlgrym event today. Here’s what I learned:

To participate, you have to be in a guild that is aligned to one of the factions. It doesn’t matter how large the guild is, and you don’t have to party with members of your guild. The entirety of the event, save for the pvp portion, is performed on the same overworld map, which happens to be the one you enter when you go to Gauntlgrym from the map.

It seems a lot of people aren’t getting this, so…
If you are in a guild that has aligned with a faction here, you can move to the map at any time just by going to the exit of a zone and picking the Gauntlgrym area. You do not have to queue for anything except the pvp portion in Phase 2. The rest is all done in an overworld zone, and you never have to party to accomplish anything in this zone.

I haven’t marked the Grand Hall, because I simply don’t remember where it was, sorry. My memory is exceptionally poor. Taken from my alt, so excuse the lack of exploration on this one. Will update when I get into the event again. Also, this is from the Delzoun side. If anyone can provide a map of the other side, I’ll add it as well. 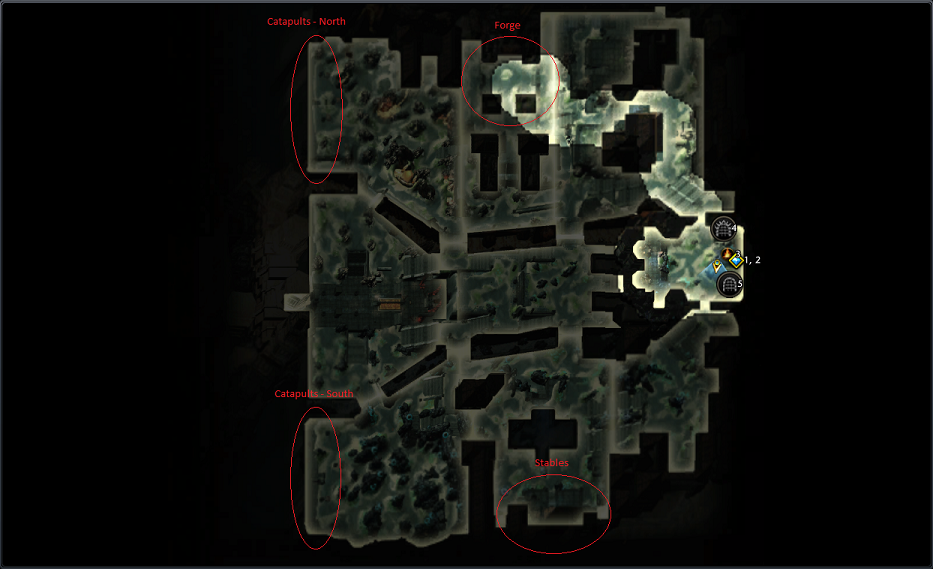 Duergar Miner
Hits for around 1500 on a partially T2-geared cleric, has about the same HP as T1 dungeon trash mobs. Drops Stolen Barding, Duergar Weapons and Dwarven Relics which are used for the Objectives detailed below.

Duergar Guard
Basically the same as a miner, drops the same stuff.

Duergar Rider
Hits for about 2-3k on my cleric, has as much HP as a T1 dungeon ‘tough’ trash mob (Eye of Gruumsh, etc). Has a dash attack like Deathpledged. Immune to CC and has high damage reduction until 50% hp, when it falls off its mount. After that it loses the CC immunity, damage reduction and dash attack. Drops the same items as the other Duergar.

Hellthorn Golem
Hits for about 4k to 7k, depending on the attack. Exceptionally easy to avoid, it has about the same HP as an Ogre in a T1 dungeon. It took my cleric about 10 minutes to solo all 3 at once. These defend the objectives for phase 1, and only 3 exist at each point.

Earth Elemental
Did not find these in the 15 minutes I had, but I expect they will be like the Duergar Riders in toughness. They drop Elemental Earth for restarting the pumps at the Stables

Fire Elemental
Same as above, only they drop Elemental Fire for the Forge.

The Blasphemer
I obviously didn’t get to kill, or even fight, this boss. I expect him to be equivalent of a T1 dungeon end boss. Killing him nets a large chunk of points for your team. It also gives you points towards Amusud’s loyalty for phase 2.

The primary objective is to score as many points as possible. Points are earned by capturing and utilizing the Forge and Stables, collecting quest item drops (earth/fire/barding/weapons/relics), and possibly others. Wining this phase grants a buff for the pvp in phase 2.

The Forge
Located on the north end, the forge is guarded by 3 Hellthorn Golems. Once these are dead you need to feed Elemental Fire to the forge to relight it. Once lit, you can deliver Duergar Weapons to the forge to score points for your team

The Stables
Located on the south end, the stables are also guarded by 3 Hellthorn Golems. Once dead, you need to feed Elemental Earth to the pumps to reactivate the stables. Once active, you can deliver Stolen Barding to the stables to score points for your team.

Phase 2 – The Armories of Moradin

The NPCs for phase 2 are the same as in phase 1, except they are significantly weaker (on the level of non-dungeon mobs). Also, golems and the Blasphemer do not exist.

As with before, the primary objective is to score as many points as possible. This time, this is largely done through PvP and the other objectives simply support your pvp team.

Fight in the Armory
You queue for PvP, and go. That’s all I know as I obviously couldn’t queue for this, being the only person participating. I don’t remember exactly, but I believe this was on a 10 minute timer for queuing.

Construct Catapults
Around the map you’ll find carts, which contain lumber. On the west end of the map you will find catapults, on the north and south sections. Delivering the lumber to these catapults will eventually finish their construction, and they will help your pvp team somehow. You also score points by delivering the lumber.

Appeasing Amusud
Time Limit: 15 minutes
In the center of the map is the Great Hall. Once you clear the Great Hall, you can deliver Scavenged Food (the fire pit) and Dwarven Artifacts (the chest) to earn Amusud’s favor. After 15 minutes, the team with the most points gets Amusud to help them in the PvP map.

Load Mine Carts
After Amusud’s mini-event is over, you can go downstairs from the Great Hall and deliver stacks of 5 Elemental Earth or Elemental Fire to the carts there for glory rewards.

Phase 3 – The Crypts of Delzoun

Also, note the time limit. You only have 30 minutes once this phase starts to enter the dungeons.

The answer is two-fold. One, it’s something new to do. Two, there are new gear rewards. Some of the gear is very nice, some of it is garbage. The sets for the Grym Coins (obtained during the dungeons, or possibly the pvp map, not from the overworld events), which happen to be the new PvP gear, are thus: