Now now.. I know the Guild Battle Rules is pretty self explanatory, if you have taken the time to read it. The guild battle rules is found here.. 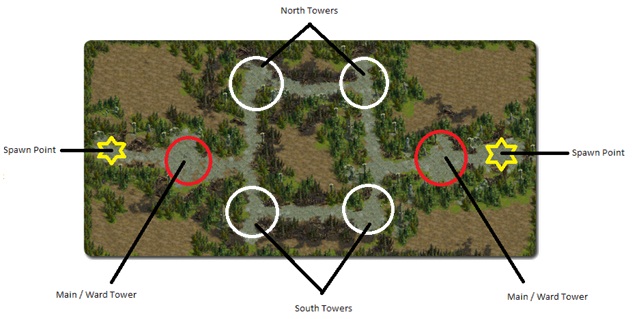 this is just an addition to the things stated in that link, well, i’ll just post here what was not included in that patch note regarding Guild Battle.

Mainly, it is how to obtain points in Guild Battle

The goal is to occupy towers until you either get 4000 points above your enemy, or destroy their main ward / tower (60M hp) which delivers a one hit kill on troops and most of the time; to your toon.

First: Occupying Towers
How many points over time does your guild get per tower?

Now, even if you occupy all 4 towers and defend them successfully, still it will take you more than 20 minutes to finish the battle (earns you reduced amount of insignias and honor), there are other things you can do to earn points for your guild..

Third: Dealing damage to enemy ward tower
Another way is to deal damage to enemy tower by attacking it with your toon (this one is not recommended because it will use up your troops and HP pots) but this will only get you little to no points at all (we can see a guild who do not have any towers but still gains 2 – 10 points overtime and it means that somebody from that guild is hitting your main ward.)

Now i’m not sure about how many points will you get if you try to attack the ward tower but doing some quick math calculations..

i’m not quite sure about that calculation, its just theoretical that you need to damage the ward by 10,00 in order for you to gain 1 point (battle with ward tower gives most players only 3 turns to do damage). Though this part needs more observation and i, will still observe how beneficial this rush-to-tower tactic is..

Questions will be posted here:

What about the Sly Sneaker on the North or South Route? Does it give points?
– The answer is no (i tried to kill them everytime but it doesn’t gave our guild a point), it gives a +5% all attributes buff for 1min (North Route), Rage Boost for 1min (South Route / thanks to Daehawk for this info).

Do you get points when killing players (either defending or not)?
– The answer is no. You only get points by the ones posted above. But when killing enemies on Guild battle, they’re HP is deducted to main tower’s hp (thanks for R23067940 for pointing out, currently in my final observation week, pretty hard actually)

“If your guild is not matched with another guild, your guild will receive an automatic win, but no rewards.” What does this mean?
– personally speaking, haven’t seen any guild encountered “not matched” status against another guild. The automatic win is given to those guilds who are facing a disbanded guild during the Guild Battle (belongs to the top16 but disbanded during the week of the competition thus by looking at the “Guild Battle” in Guild menu, the disbanded group is removed and its spot will be left blank)

What do we get for winning guild battle?
– Prizes for Defeating enemy guild:

1. Inspiration – All members of the next battle will initially start with 80 Rage.
Guild Wealth Consumed: 10,000
Total Attempts: 10
Cooldown: 300 Seconds