Hello, I’m a knight player in “other” RO 2, I thought I wanna share something about this class to future iRO2 players. Please excuse my english, I’m not a native english speaker. 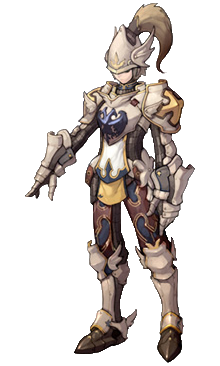 If you’ve played RO 1 before, knight is more akin to crusader in RO 1, while their counterpart; warrior is more like RO 1’s knight.
They’re one of the tank classes in the game, the other being warrior, beastmaster, and monk.

– They look cool
– They’re the easiest tank class to play, good for beginners.
– They have a party skill that’s very useful in raids (shield fortress).
– They have 2 stun skills (shield charge and shield bash), and 1 slow skill(shield boomerang), good for duels/pvp/colosseum.
– They have a spammable AoE attack (grand cross), which makes them versatile (can be either off tank/main tank).
– They wear heavy armor AND shield at the same time, so they have one of the highest raw defense in the game (although a well-geared warrior will outclass knight’s defense due to their defender skill).

III. Cons of a knight.

– Can’t move while using their AoE skill (grand cross).
– Crappy damage, might be boring to level because you take longer to kill monsters.
– Useless self-healing skill (aura heal) NOTE: They may change this skill later in the future.
– You have to hunt an extra piece of equipment in raids (shield)
– Lack of good self healing skills means you have to use more pots/food when questing.
– Too “average” compared to other tanks.

IV. Knight compared to other tanks.

– Monks and Beastmasters do better job at tanking a single strong monster, but they have a problem dealing with more than 3 monsters at once because of their lack of spammable AoE skills.
– Warriors, when decked with end-game gears, are EXTREMELY powerful due to their defender skill (30% increase to defense,parry,dodge, they can easily reach 70% parry rate with this) however, they lack party skills.

Overall, knight is a more well-rounded tank in my opinion and more group-centric, while the other tanks are more “specialized” tanks.

Most people will recommend you this build, it works just fine, however I’m not really a fan of increasing VIT, 40 vit will only give you a measly 240 HP.

What? 1 vit for a tanking class? LOLOL U SUK NOOB ROFLZZ.
Wait for a moment, in RO2, vit isn’t as important as you might think (I explained in above build), and most of your stats come from your gear anyway (ALL knight gears give A LOT of STR and VIT, but very little AGI)
So why AGI? 1st, it increases your dodge rate (well it’s negligible, but better than nothing), 2nd it increases your critical chance, this is important IMO, more crit means more damage = more threat = less chance for DPS classes out threating you.

– OR, if you want more crit chance-

– OR, if you want more crit damage-

Provoke
– Taunts the enemy, 20/17/14/11/8s cooldown
Use this when someone out-threat you or when you want to lure a mob, taunting mobs that are already attacking you will do nothing.
Levelling up will decrease the cooldown, but lv 1 is enough.

Magnum Break
– Deals 20/23/27% AoE damage to max 3 enemies, and add 50% of the damage dealt to threat, 3s cooldown.
A lot of people said this is useless because grand cross has no cooldown and can hit up to 10 enemies, I still find this useful because
-Grand cross’ damage are split into several hits, so it’s a bit slow to gain threat on mobs.
-You can combo this with grand cross (use GC when this on cooldown)
-You need this if you’re planning to get battle tactic (more on that latter)

Wide Provoke
– Taunts all enemies in 10m radius, 180/120/60s cooldown
Just get 1 for aura armor, This is not as useful as provoke because the monsters will go back at the highest threat party member after 6s, still useful in emergencies though.

Battle Tactics
– Increases your critical damage by 0.2/0.4 * INT
Believe it or not, this is actually a good skill, but swordsman has no INT you said? Well, at lvl 50, you’re likely to have around 100 surplus int from accessories, cards and title (as a reference my current knight has around 180 int, with only accessories,card bonus, and title) 100 int alone will increase your critical damage by 40%, meaning you’ll be dealing 2.4x instead of usual 2.0x crit damage, the end-game potential for this skill is very high, however, the choice is up to you, if you think you can keep your crit above 20% (not hard to achieve with end game raid gears) get this, if not you may skip it.

Aura Blade
– Increases your attack power by 2/4/6/8/10%, can’t use with aura armor.
Aura armor is better, but you need to put a point in this to get knight skills.

Aura Mastery
– Adds 5/10/15% chance not to consume any aura for next skill when using an aura generating skills. The next skill used will have the same effect as when 3 auras are used.
This is a good skill, I personally max this, but if you’re short on points, you can take off some from this.

Concentration
– Increases attack power by 4/8/12/16/20%, but increases damage received by 10%, require 1 aura, each aura consumed increases duration by 15s, 3s cooldown.
A good skill for pure pvp/dps knight, although I don’t really recommend going on that route, you might want to consider this if you’re planning to be a hybrid knight, you need to be more careful when fighting bosses though (not a lot of choice for hybrid knights sadly).

Aura Heal
– Heals for 2/4/6% of your attack power amount.
Garbage, even with epic gears you’ll be getting about 200 HP heals, skip this. NOTE : They might change this skill in the future.

Shield Charge
– Charge at the enemy and stuns it for 3s, 60/50/40/30/20s cooldown, 20m range, can’t use if you’re closer than 5m to the enemy.
This skill albeit a little buggy, still useful for PVP and colosseum, if you don’t like PVPing just put a point in it to unlock grand cross.

Shield Boomerang
– Throw shield at the enemy, inflicting 18/21/23/25/27% physical damage, can hit up to 3 nearby enemies, also reduces their movement speed to 40% for 6s, 15s cooldown, 20m range
Get lv1, higher lv will only increase the damage slightly, not worth the points.

Shield Boomerang Mastery
– Adds 4/8/12/16/20% chance to reset your shield boomerang cooldown when using an aura generating skills, next use after reset will gain 1 aura
Might be good for pure PvP knight, not much use in PvE though, just get 1 to unlock shield cannon.

Grand Cross
– An AoE attack that inflicts 16/19/22% physical damage, can hit up to 10 enemies, you can’t move while using this skill.
Get lv 1, you’ll only use this to maintain agro on mobs, even if you max it the damage increase isn’t noticeable.

Aura Shield
– Increases damage reduction by 4/8/12/16/20% for 10s, 60s cooldown
Decent skill, you can max it if you got the points, I usually use this with fortress so you can get 70% dmg reduction for 10s, useful when a boss monster enrages.

Shield Fortress
– Increases damage reduction by 10/20/30/40/50% for yourself, and 5/10/15/20/25% for your party/raid squad in 20m range for 10s, 120s cooldown. NOTE : During the 10s duration you can’t move/attack and use potions, so make sure you already got enough threat before using this.
Knight’s signature skill, max it, this is your OH SH!T button in dungeon/raids. Use it when:
– All your party/raid members are below 60% hp and a boss is preparing for an AoE skill
– You’re below 50% HP and your priest is busy healing other party/raid members.

For armors/weapons, just get any green/blue equipments you can find, remember to get the dodge/parry set over hit/vigor/haste set.
After you get to 50, go to hard mode dungeon to get your lv50 set before going to raids. 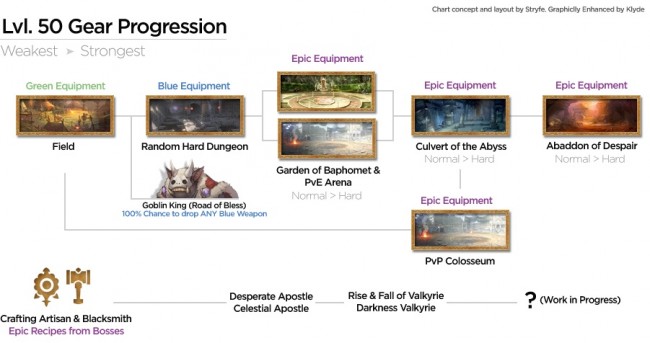 “RHD is no walk in the park. I’ve seen many players skip this and go straight to RHD with lv 4x equipment, or worse, lv3x equipment! If you choose to skip this, you’re gonna have a bad time.”

“This is an optional step, but many do it because it’s so convenient. While not as strong as RHD Weapons, Goblin King Weapon is a good pit stop to upgrade your weapon.”

“Random Boss Drops, or from OBB. Decent, Slotted Equipment.”
Note : Get these before going to raids!

“Bosses drop tokens of varying colors. Details aside, players trade these tokens for corresponding equipment. The later Raid Sets (Culvert of Abyss and Above) that grant set bonuses as you complete the set (For example, Having 2 Pieces will grant % Haste bonus).”

“A very strong set, that can be worked towards as soon as you can enter the colosseum. In terms of strength, matches that of CoA. While it lacks the set bonuses, the Colosseum set features PvP Damage Increase/Reduction bonuses.”

“Crafted sets are a lot harder to obtain, since the materials for making them are rare, but the recipes are even rarer. However, they boast a huge increase in Vigor/Haste or Parry/Dodge compared to other sets, and they tend to have 1 more rune slot.”

Other sets worth mentioning:
“There are also lv50 Epic/Blue Field Sets and Victor Points I, II, III sets. They all have their purposes, but they’re isolated cases. You’ll learn about them on your own eventually.”

For cards, use whatever str/agi/vit cards you find before lvl 50.
After you reach 50, hunt some scratch thieves for their cards and use them, they give the following stats :

Make sure to get 5 of them before going to raids because they give you a decent amount of vit !

At end-game you can hunt cards that give set bonus, you can get them from culvert of abyss and abaddon of despair mobs.

That’s all, I hope this guide will be useful for future iRO2 players. cheers!