This build focuses primarily on balancing out your offense and defense.

FOREWARNING: The talent and feat calculators have one less point than they should. For the extra power add it to whichever one you like (mine is on Path of the Blades 2/3). For the extra feat, use it on whichever feat you have at 4/5 and make it 5/5.

The feats are also not for humans. If you are a human I suggest putting the extra points into Improved Cunning Sneak.

First of all, to clarify Combat Advantage – it has multiple effects but here is one that most people aren’t aware of: You get a +25% damage bonus while in stealth by default. Test this by doing hits out of stealth and then in stealth. You’ll have an average 20-25% increase. That is why my build is more so oriented around stealth than others.

At-Wills – Sly Flourish and Cloud of Steel. These are really the only two to use in PvP since Duelist’s Flurry will rarely ever hit enemies because of it’s long charge-up time.

Race – Human is the best race to go in my opinion with the extra feats but Half-Orc is basically equal if you don’t mind their appearance.

Abilities – Go full Dex and Str, since you’ll be getting Disciple of Strength which increase strength dmg bonus.

Deft Strike OR Shadow Strike OR Impact Shot(I use Deft Strike most of the time because its nice against CWs. Shadow Strike will let you regain stealth meter and get Combat Advantage. I occasionally use Impact Shot for it’s extra dmg at range but it isn’t worth it unless you’re going against a team with 0 CWs.)

Class Features – I use Tactics and Tenacious Concealment because they are both in effect at all times. First Attack is only going to effect your enemy once and it’s not going to help you in lengthy 1v1s or team fights very much.

Part 1 is pretty cookie-cutter. All of this stuff is specced in just because you can. You get an excess of powers that you don’t necessarily need. It allows you to use this spec for PvE as well and you don’t have to forfeit any PvP efficacy because of it. Same with part 2.

I use Impossible to Catch for CW heavy teams(2 or more). Impact shot is very useful for it’s stun but I don’t use it very often. 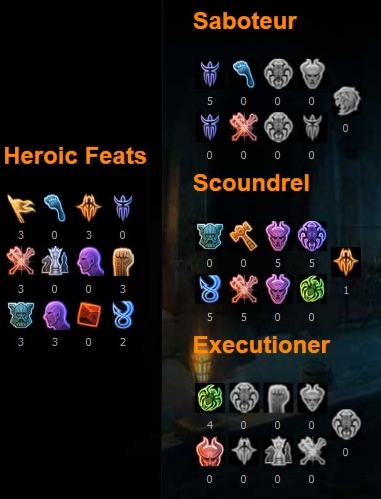 Scoundrel has the best PvP feats by far. All of the feats you spec in for this tree are pretty great. (Underhanded Tactics [Gives bonus combat advantage damage bonus] Nimble blade gives you a 35% chance when you don’t crit to hit 20% more. Mocking Knave is 10% more damage for your at-wills. Action Rush gives a 15% chance to gain 15% of your action points with your encounters, Whirlwind Sneak is great for when you eventually run out of stealth.

The leftover feat points that go into Saboteur and Executioner are very much preferential and largely depend on your playstyle but I highly suggest the ones in the images.

If you’d like to change your FOV use the following command: /gfxSetDefaultFOV XX where XX is your FOV. I suggest 70, the default seems to be around 55.

I did a lot to shorten this guide out for everyone. There are of course some small matters of preference you will probably differ on but I am convinced the rough outline is the best possible for competitive PvP.

Hope everyone enjoys. Honorable mention to Loli for helping me draft a lot of my ideas. (PS: I accept any friend requests and I own a guild which is theorycrafting oriented on Beholder – Praelatus@ararararararagi)