So you picked a tank and want to do damage.

In this guide I’ll tell you what feats I like and which I dislike, which powers I use, and what gear I focus on. Playstyle, strategy, and rotations will be towards the bottom. By the end of this mini-guide you’ll be hitting numbers rogues are jealous of. 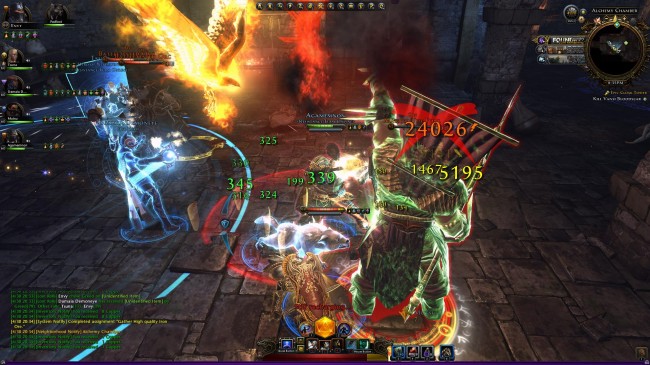 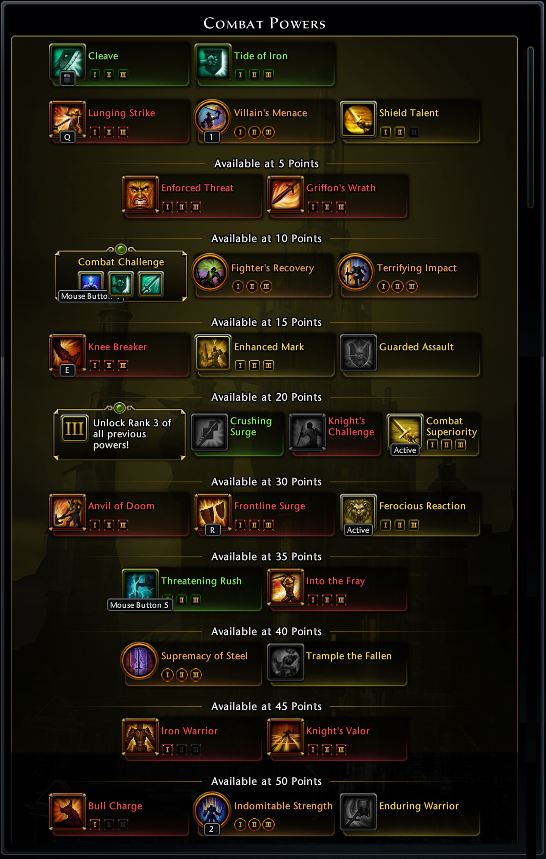 Cleave – Probably one of the most solid at-wills in the game. I haven’t changed it out once. Does decent damage once feated for it, and its a frontal cone AE.

Tide of Iron – Again, another at-will you will probably keep slotted for the entirety of your Guardian Fighter career. The damage is about the same as cleave, but single target. The reason this skill shines is the guard meter replenish and a 10% resistance debuff added to the target. Helps you stay alive and do more damage.

Lunging Strike – With 3 points, you get an incredibly long range gap closer with really good damage. I know you’re tired of hearing this but, this is another skill that I’ve kept since level 1. At 60, I’m consistently critting ~5k with it, and as high as 8k. With a decent amount of recovery you can easily get a 6 second cooldown on this skill. Definitely my favorite.

Villian’s Menace – This is the first daily you get. It increases your damage and makes you immune to CC for a short duration. It’s okay. I rarely use it at 60, but would consider slotting it in a control wizard heavy PvP match.

Shield Talent – Increases your guard meter by 5% for each point you put in it. This is irrelevant for our DPS needs.

Enforced Threat – I use this skill while questing in areas with high mob density and in dungeons. It’s a good AoE with good damage. It also helps keep the mobs off your healer companion. Best used in tandem with Frontline Surge.

Griffon’s strike – WHAT?! I’m honestly surprised we get such a good skill. With 3 points you get 3 charges to this skill. It’s a high damage skill that stuns. WHAAAAAAAAAAt. The charges cooldowns are independent to each other, and if used properly in a rotation, you’ll always have a charge available. Crazy good in PvP.

Fighter’s Recovery – I’m underwhelmed by this daily. Even with 3 points, I find the heal negligible. Not worth your action points.

Terrifying Impact – This is a nice daily to have in your AoE build. It’s one of your hardest hitting skills and its a front column AE knockdown. I sometimes slot this in PvP against Clerics and Wizards for that ranged knockdown.

Knee Breaker – Another great skill for our DPS. This is a damage over time skill which is great because it means you’re always damaging your target even if they’ve managed to create distance. It also comes with a slow. I use this in PvP because the DoT is deceptively strong.

Enhanced Mark – Doesn’t help our DPS but put it at 3 points so you can keep bosses on you when you’re doing dungeons.

Guarded Assault – At 3 points reflects 3% of the damage you blocked back to the attacker. Haven’t gotten a point in this. If you find success with it, good on you.

Crushing Surge – Your basic tanking at-will. Slow and low damage. Irrelevant for our goal of out dps’ing everyone.

Knight’s Challenge – Another tanking encounter that has no business in our build!

Combat Superiority – This is one of the passives that makes a DPS tank succeed. You get 10% damage after a mob hit you. Once feated, you get 15% damage and it no longer requires the mob hit you first.

Anvil of Doom – I’m really conflicted on this skill. It’s arguably the highest damaging skill a GF has access too, under the condition that you use it on a target under 25% health for the double damage. Unfortunately, the slow animation time makes this skill not very appealing for PvP. I might try it in another power set-up later on, as the execution mechanic works well for finishing things off.

Frontline Surge – As mentioned above, this is one of your AoE bread and butter skills. It’s a faster, slightly weaker version of terrifying impact. Would be nice in PvP if the cooldown wasn’t so long.

Ferocious Reaction – I love this passive. While not majorly attributing to DPS, it does with my playstyle. I’ll touch on that later. When you reach 15% health you gain 10% of your max health and do that much damage to the target who hit you. Temporarily gain a damage resistance buff. Just… wow. So good for PvP! If you don’t slot this you’re not doing it right.

Threatening Rush – I slot this in PvP. It’s STUPID. How does this exist? A 20~ meter charge with no cooldown? I hope you weren’t trying to kite me because it’s not going to happen. Between this, lunging strike, and all your interrupts, no one is getting away from you.

Into the Fray – Decent group utility skill but without it being feated for the damage bonus (in the tactics tree), it’s mostly unwarrented for this selfish DPS build. Screw you group, I’m trying to put out big numbers not help you put out bigger numbers!

Supremacy of Steel – Reflect. Really good for big mob pulls. I slot this in between bosses and while questing.

Trample the Fallen – 5% more damage to controlled targets. While a decent boost in DPS, both our passive slots are full already. If you really just want more DPS and don’t mind sacrificing some survivability and utility, replace Ferocious Reaction.

Iron Warrior – Really good skill in conjunction to the feat that increases your damage by 15% while you have temporary hit points. I don’t currently use this in my build, but if you find success with it I would love to hear.

Indomitable Strength – Really high burst, interrupt daily. Have this in one of your daily slots. I crit in 5 digits with this often.

Enduring Warrior – Why does this exist? So bad.. 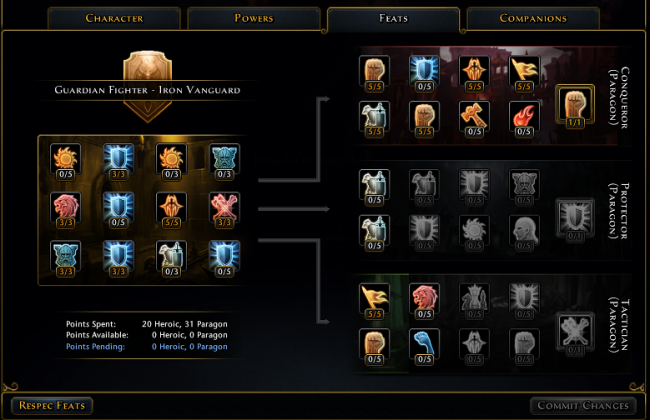 Shielded Resurgence – Gain 4% of your max hit points when affected by a control. A little bit extra of survivability goes a long way.

Armor Specialization – Increases your armor and AC by 15%. This helps pad the damage youll be taking by not blocking as much.

Weapon Mastery – 3% crit chance. This is just to help hit that crit rate sweet spot once youre geared to the teeth.

Improved Vigor – Gaining more action points while low on health can be clutch. Pick this up.

Take Measure – When you’re crit you gain temporary hit points (50 sec CD). Not only does this help you stay alive, in conjunction with Wrathful Warrior you get a huge DPS spike.

Reinforced Surge – Adds a second onto Frontline Surge KD. No DPS gain. Not worth.

Staggering Challenge – This feat is worded confusing but I just avoided it since I don’t use the frontline surge and Griffon’s Strike in the same build.

Tactical Superiority – Combat superiority does more damage and I dont need to get hit for it? k Ill take that. Thanks.

Reckless Attacker – This is it. This is what makes a DPS GF work. You gain power equal to how full your guard meter is. A full guard meter is a full 100% bonus in your power.

Fight on – This feat is in the bottom tree. Which you will use your 5 remaining points on. 10% CDR on your encounters. Nuff said.

This makes me sad. The GF gear in Neverwinter is largely always tank stats. I haven’t seen much gear with the coveted Power/Crit/Recovery that I so desire. The PvP set is even all tank stats. It really is a shame as this is limiting out potential. Although, I still haven’t seen all the gear so fingers crossed! 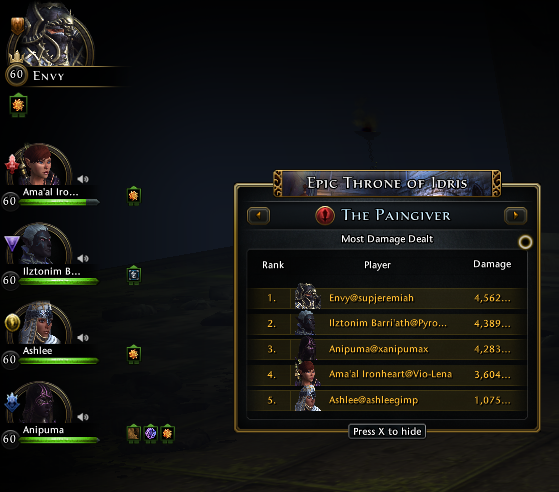 Like many of the feats names, the conqueror spec encourages you to play reckless. That means don’t block unless absolutely necessary. You’ll find that you have enough passive survivability that blocking becomes largely irrelevant. Do your best to position yourself in such a way that you’ll always have combat advantage. This shouldn’t be a problem if you have a rogue in your group, as flanking provides CA.

PvP – Very Similar to the PvE single target, as PvP is all about the burst. You might want to mess around with a different build but I find my single target PvE to be successful

Trickster Rogue – When you see a rogue coming. Block. Just hold block. If you can, keep your back to a wall. Keep blocking until they blow their encounters, and make sure you block their disarm. Once their CDs are gone, use lunging strike and your at-will gap closer to stick to them. Knee breaker will help with this. You can use Griffon strikes for upfront damage but try to save one to stop them from running away at low health. Using the reflect daily is funny against them.

Control Wizard – Do they even do damage? I honestly stay full health when I fight them. Their blink is the same range as our at-will gap closer. I dunno what to say really, you can faceroll a CW without worrying about blocking anything in particular.

Devoted Cleric – Unless you have your daily ready, you’re going to have a tough time bursting them down through their sustain. Do-able, just use your Griffon strike stuns sparingly.

Guardian Fighter – Just walk away. It’s going to be a 5+ minute fight and nobody got time for that.

Great Weapon Fighter – Another faceroll matchup. Save your block for when they blow determination. Otherwise, you can mostly facetank their damage all while doing more than them.

Some things to point out in this video:
1. The first clip I didn’t die. There’s a bug currently where your game will sometimes crash when a Rogue uses smoke bomb.
2. The second clip is a stomp match. I tried recording an even match but there were none. My premade is OP and they carry me. ^^
3. Yes, I listen to Paramore.
4. This video took 17 hours to upload, so I’m postponing any more videos until I upgrade my internet connection. This should happen soon.
5. Last clip was put in for luls but it does a good job of showcasing how durable you are, even as a DPS spec.
6. I also don’t feel like any of this was an accurate representation to how successful this build can be so expect things soon!!