Hello! Just wanted to help my fellow Combat Rogues out there and those Combat Rogues Wannabe. This is my first guide so correct me if im somewhat wrong with details. Im still level 43 from Psychodelica Server. So it is limited. So ill only make a guide until level 50.

NOTE: This is not the only build you can do, this is just based from my own experience as combat rogue

What is Combat Rogue?

Combat Rogue are killing machines that tears down enemy’s HP using chain of skills and DOT leaving them bloody over time. While as for Shadow ,they rely on their stun. So with no sugar coated words, once the Shadow’s Stun lands on you, you’re dead.PERIOD. But When youre lucky enough to dodge it, they’re dead. PERIOD (Tip: When they will use shadow strike, use lightstream , it will reveal them!)

*Combat rogues are not that popular in this game and i must say they’re pretty much always underestimated. But i myself enjoy playing this especially in dungeons. But i have to say, they will only be frickin great after rebirth as you can max out all useful skills . I myself havent been to rebirth so my guide is i repeat, LIMITED.

I would recommend 2 Str/ 1 Agi until level 25 then Full Strength After it. Why agi? So that you’ll have some crit chance and hit rating . This also boost a little dodge. After 25, go full Str as it increases PATK.

For me, i focus more on left and middle tree(damaging skills) as it is more important before rebirth. Max them first because you’ll lack skill points if you’ll try to learn the right tree and damage skills at the same time .And after rebirth, you can use the right.

Your Skill tree should turn out like this when you reach level 50: 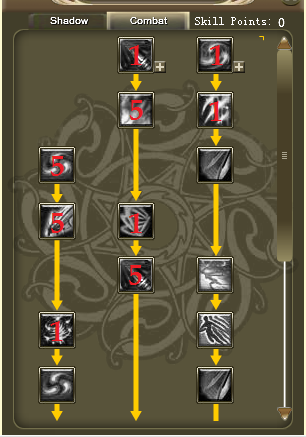 Lightstream- 5/5 Max this too as it hugely increases Patk and hits enemies at the same time. This can also be used to initiate an attack or escape mechanism.

*After getting all these at level 44, get 1 blur and 1 shadow slap when you reach level 48. Shadow Slap is very useful in fights because it removes healing effects and prevents enemy from using any pots. And when you turn 50, get Reversal.

TIP: You can use SOT when you reach level 50 to stir your skills up!

Been going back and forth changing to find the better build. My current build is a
Passive Rogue . And i have to say, this is my favorite build . High Dodge and Crit Rate and High Damage boosts. So you’ll mostly rely on your attack. This is great for dungeons. Ill show you how its done : Lvl 62 ATM 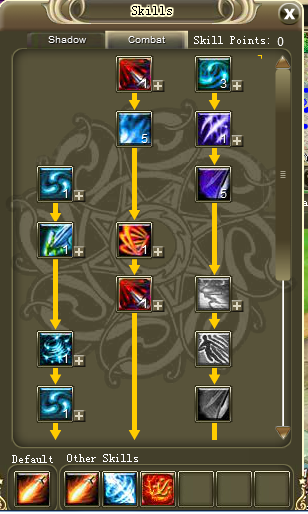 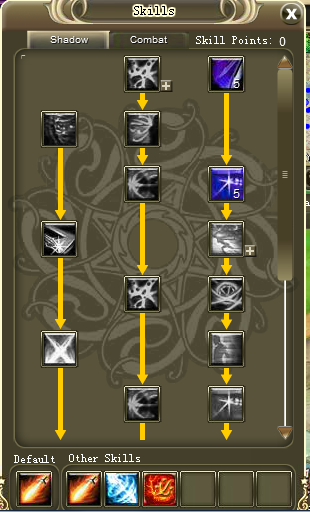 Triple Strike- 1/5 This is your main attacking skill .

Imp. Double Cut-1/5 Just put this at one , this is becoming useless at the moment youre 60+ because you’ll mostly encounter Pvp only in Seng , and the DOT damage of this is gimped there.

Blur – 3/5 or 5/5 Well. Ive tried 5/5 Blur and its cool. You’ll mostly dodge enemies and bosses. But After resetting my skills again, i placed it to 3 so that i can use more skills. Its up to you what you want =)

Slayer’s Deftness- 5/5 – 10% Dodge Rate is already a very big YES YES to stats. With the addition of blur, youll mostly dodge when going through 1on1.

* If you’re asking why only 1 point for reversal and imp. Lightstream, its for you to be able to take additional skills. You have very limited skill points before rebirth so better use it to the fullest. It would also be sufficient enough to give you high damage boosts for a while. and Don’t forget, The slide has damage =) You can use it for initiating an attack or escaping a gank. I use it as an escape in Seng when the other team is spawn killing. =)

CONS:
No Stun (*Heartbreak) Well basically Combat have stun, but only available when level 80 .
No Killer Skills
No Invi (But Lighstream/Reversal can be alternatives for escaping)

Focus only on Ice and level it up to 5 to unlock the Brilliance. On Ice, focus on the first one in the top and the other 3 in the bottom.It provide the most effective benefits for your character without having through any irrelevant prerequisites.

Then on Brilliance Soul, Vulgarity and Cruelty are my number one as it increases my movement , attack speed, and crit ratio.

On Void Soul, Illusion, deftness and Simplicity. They give you Agi bonuses and crit ratio bonuses

General Pet:Morphed Archer or Spectre with Frenzy/Dodge/Fierce Attack or Charm will be a great pet.

Morped Vulture with Heal/Charm/Infinity will be great for support too esp. in dungeons.

If you’re using Crystals, you can go whatever pet you want.


Nevermind Dreamwalker Set during Lvl 20s because you will level up to 30 fast you’ll just waste your money.. So i recommend go straight for Ethereal Set during level 30’s. Once your 40, Savage Set will be best as it improves your PvP Capabilities.

Well that would be all, this was my first guide so there could be flaws with this guide. So be easy on me okay? Enjoy the game