With the release of Update 7, and the Steam release, Warframe’s player progression is more reliant than ever on you having a good selection of mods at your disposal. With this guide, I’ll show you how to maximize your mod earnings per mission, as well as foundry crafting items and how to determine what alerts are really worth your time.

Why should I farm?

It all comes down to the changes made with Update 7.

While farming for foundry supplies was somewhat worthwhile before, it wasn’t needed, and mods weren’t your only means of building your character. During the closed beta, levelling your frame and your weapons actually DID something. Each piece of equipment had an RPG-like levelling-tree, which could be expanded dramatically by installing an Orokin Reactor or Core. Now, levelling your gear simply increases how many mods you can fit on your gear, and the Reactor/Core increases that number significantly.

Whereas before, I earned bonus damage, rate of fire, and such from a tree for my Burston rifle, now I have to have the associated mods. No longer can I save my mod slots for more interesting mods, like burstshot or fire damage, though they still exist if I so desire.

What the hell is a mod? 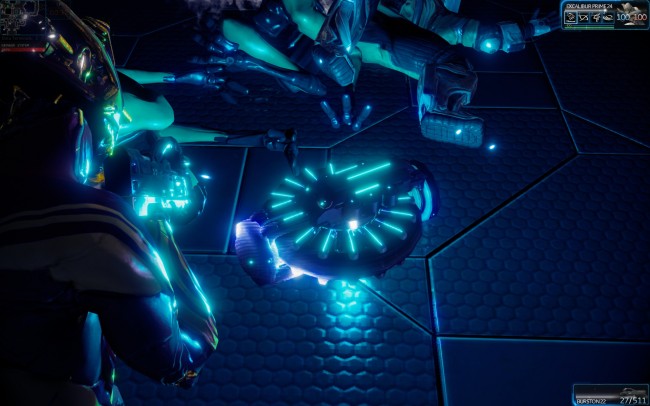 Enemies are the only way you will get a mod to drop, so you want to kill as many enemies as possible to maximize your potential earnings.

As I stated in the first section, these mods are extremely important as of Update 7, as they now grant your gear all of their buffs. Any damage increases, rate of fire increases, and so on, to the more interesting mods like burstshot and elemental damage, come directly from an associated mod. 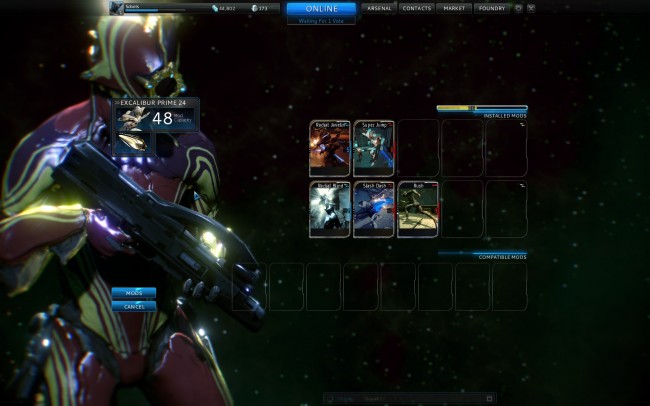 Each mod is worth so many points, and your items level determines its mod capacity. If you try to equip more than you have the capacity to afford, well, it won’t work. Orokin Cores can be used to increase your mod capacity greatly.

To upgrade a mod, you must use the fusion process. While you can use a fusion core to do this, the return on your investment makes it hard to recommend. You will be spending around four times as many credits to fuse a mod with several fusion cores in order to level it up, whereas fusing that same mod with a duplicate would cost you only 400 credits and level it up faster than the cores would. If possible, only fuse using duplicates. You should keep in mind that the cost will increase as the mod levels, so even with duplicate mods, you will start paying more eventually. By level 4 or 5, you’ll see too little return on your investment to make it worthwhile anymore.

Finally, some mods have an icon in the top right corner (Thank you for bringing this to my attention, docmatthews180!) of their card. As you may have noticed, your mod slots may also have icons in the top right corner. If a mod with a matching icon is placed in these slots, it will take up less points, allowing you to put more powerful/expensive mods overall on your gear. The reverse is also true, so try not to mismatch icons. This really can make a difference: I’ve gone from having 5 free points to 26, just from rearranging my mods!

The Foundry, and Foundry Supplies 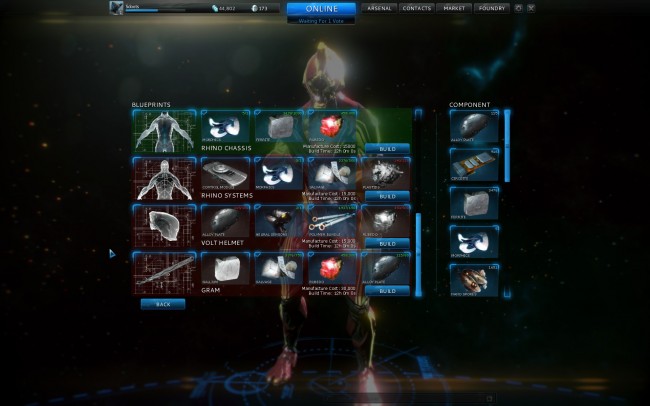 Some items are exclusive to blueprints, with the developers saying that the best gear is only possible to attain via crafting in the Foundry. Clearly, you’ll want to have your hands on these supplies.

Thankfully, Warframe makes it fairly easy to farm for supplies.

The supplies themselves appear in-game as boxes with a molten-lava texture, and you will not know what it is specifically until you pick it up and see its name appear at the bottom of the screen.

When you are farming, these supplies are the reason you are breaking open containers and opening closets. Enemies may drop them as well, but you will drastically increase your output by emptying every possible container.

Where should I farm?

Honestly, wherever you want. There’s no shortage of choices, and I can tell you from experience that areas that work well some times might work poorly another.

There are some guidelines to remember, however.

This all said, an area that I’ve had the most consistent luck in finding basic level mods is the Assassination mission on Mercury, so if you are really lost on where to go, try that out.

Once you’ve gained some experience, and a relatively solid collection of mods, you might want to check out Kiliken in Venus. It’s an Endless Defense mission, which goes against my suggestion above, I know. That said, it works really well, and every 5 waves you’ll be offered a rare mod, with the catch being you quit the mission if you take it. It’s pretty fun.

Credit to Sovn in the comments for this: Eligor in Europa is another good Endless Defense mission worth checking out. Thanks, Sovn!

UPDATE: It seems that most, if not all Defense missions are now endless. If this is the case, feel free to try your hand at farming there!

What’s up with these Alerts?

Alerts are Warframe’s way of giving you exponentially more credits than usual for completing a mission. That said, Alerts can also reward you with all kinds of great loot!

In general, I suggest taking any alert you find. The extra credits are always handy, especially when you are just starting out. For reference, I like to have no less than 50,000 credits in my inventory at any given time. Of course, if you are just starting out, that numbers not exactly realistic, but alerts can help you reach that safety net number much faster.

The best part about Alerts is when you find one that offers loot. You can determine if an Alert offers loot by the Rewards screen that is displayed before you accept the mission. If a “?” is displayed, you will earn something cool. These are ALWAYS worth taking early on, however after some time you will want to coordinate with other players to determine which of these is truly worthwhile.

Luckily for you, the Warframe community has already created a few resources for you to use.

Warframe Alerts is a very helpful Steam group that posts events whenever a loot-rewarding Alert opens up. If you get serious about Warframe, this group is an incredibly useful assistant in your gameplay experience.

Alert Notifications on Warframe Forums is also really handy, and is part of the Warframe official forums. Pretty much the same idea as the Steam group, without the Steam integration.

Being a Gentlemen and a Scholar

Before you even load up a mission, set your squad to Private or Solo. If you don’t know how to do this, simply click on where it says “Online” at the top of the screen at the main menu, and select one of the other options.

This is done for your benefit, and out of courtesy to the general player base. On one hand, you don’t want to have random people coming in and bumrushing the extraction point, especially with the chat server being as unreliable as it has been (Seriously, what’s up with that?).

On the other, you wouldn’t want to finally find a game for a mission you need to complete, only to discover the other player isn’t even bothering with the objective.

You should play with the Squad set to Online if you are playing one of the Endless Defense missions, however.

The Actual Act of Farming

You’ve trained your whole life for this. Well, actually you probably haven’t, but that’s not the point. It’s time to get busy.

Before I get ahead of myself, you should know that blueprints can cover more than just Warframes. However, I’d rather not spread this guide across more than I already have, and you are probably more interested in the frames anyways.

The various bosses you will encounter during your time with Warframe follow the example set by any good boss, and have the chance to drop goodies for you upon their demise. In a rather MMO like fashion, certain bosses drop certain blueprints, so if you want to make Rhino, there’s one place to go.

One last note before I get to each frame and their respective boss/location, buying a Blueprint in the Market does NOT act as a shortcut. In fact, the blueprints in the market are required when finally forging your new Frame. To elaborate, the bosses will drop prints for things like “Rhino Chasis” and “Ember Systems”. The formula to make a Frame that is listed on one of the Market blueprints is, if you haven’t figured it out yet, all of those boss items. So once you have built each individual piece of your frame, you then have to have the final blueprint to actually forge it all together. If someone gets the final frame print to drop, please let me know, but as far as I can tell they must be bought with credits in the market.

I’ve got some mods, are there any builds I should use for farming?

For your frame, put on some armor, shield, and health buffs, as well as some sprint bonuses. Of course, you will also want loot radar, so that you can see nearby containers on your mini-map.

Weapon wise, that’s your call. I like to use my Burston for just about everything mid to far range, and I carry Afuris for my pistols to quickly deal with anything that closes that distance.

A set up that I’ve heard good results from are the Strum shotgun and the pistol-class shotgun thats name escapes me at the moment, with heavy sprint bonuses and loot radar bonuses on the frame. This would leave your defenses lowered, but you’d be moving quickly enough and putting out enough damage to hopefully negate that.

If you want me to be honest, outside of loot radar mods there really isn’t much need for a farming build. Odds are, whatever you use for regular play will work fine here.

If you have any questions or comments, please leave them below and I’ll be happy to answer them. You can reach me in game at “Sdoots” if you need any further assistance, as well.