Introduction – Just wanted to share my FS Sorc guide and experience with you all. I think support or healer Sorcs are just as capable (even better in some situations) at healing as a Priest. Sure Sorcs lack some of the essential skills that Priests do. Like Coloseu Heal or Blessing but they make up for it in other areas (such as DPS/BurstDamage or AOE healing). I know there is a lot of bias against Sorcs being a main healer but I have found them to be just as good as a Priest in parties. Some people will see a Sorc as a main healer and automatically be turned off. It takes a little convincing but people soon realize that Sorcs are awesome as healers. I have solo healed in parties from Sea God Temple to Ghost Ship and also in parties against world bosses like WildSpeed, Stainer and Sandial Queen. I don’t think I have struggled any less than a Priest would have, sometimes probably less because of AOE heals.

*Updated As I’ve mentioned above I’ve been running parties, RHD’s and raids with my Sorc. I was able to handle Goblin Leader as a solo healer EASILY at level 50 with full Ghost Ship set(weapon+armors). I was also able to run RHD’s as a solo healer quite easily with almost full RHD set. I also was able to solo Farm certain world bosses like Wandering Wolf(it takes awhile though) something a DPS Sorc of the same level and gear set would probably find impossible.

Raids, however, are a different story. In raids I find myself constantly out-DPS’d by similarily geared DPS Sorcs by about 1/2 – 2/3 the damage (90% of level 50 Sorcs are DPS). Also in 5-man RHD parties where a Priest is present I found myself somewhat handicapped since the Priest was doing all the healing and my DPS sucked. For these reasons I reset skills and invested more points into Wind Seal to switch to DPS when needed.

The plus side, of course, is that my party’s/raid’s survivability was greatly enhanced. My healing was on Par with Priests and I could easily help out as a backup healer when needed and help out in healing individual party members after devasting AOE attacks. My strong LoR and Deluge took a lot of pressure off the Priests. I could also rotate my Deluge with Priests’ Sanc to increase party survivability. I remember 2 Raid fights where both our Priests were down and I had to take over as primary healer. Thanks to me we were able to win those fights whereas a DPS Sorc would not have been able to do the same. My raid members were pretty impressed. What it boils down to in Raids is Survivability(Full Support) or more damage(DPS). Having both Earth Seal and a decent Level Wind Seal and switching between the 2 is essential depending on the situation.IMO every raid party should have a 3rd healer or backup healer/hybrid

*Updated *This is my old skill build.
My Skill Build 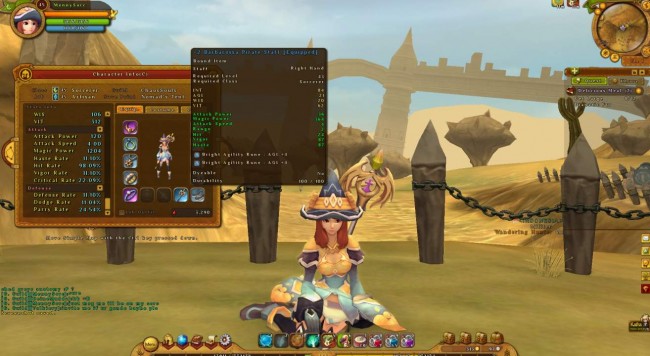 *Updated Equipment/Cards – You will want anything with vigor and haste for casting healing spells faster. For cards grab anything with Int, Dex and Vit if you can(Alrus, Hermitus, Poisona are good cards). You want to get exclusively AGI/VIT Runes. AGI Runes help by increasing your chances of critical heals and critical damage hits and VIT helps increase your HP to survive boss attacks. You want something like a 1 to 4 AGI to VIT Rune Ratio. INT Runes are not as useful because Critical Chance adds more DPS/Healing than raw INT Power.

Offenseive Abilities – As a support Sorc you won’t be dishing out as high of damage as a pure DPS Sorc and it will take you longer to kill. You will basically be hunting using the basic Magician spells plus 1 or 2 Offensive Sorc Spell. Firebolt/Fireball/FireboltMastery is a good combination as well as FrostDriver/LightningBolt or ColdBolt/JT/JTMastery. However, remember that you are a support Sorc! And that means people will be lining up to party with you for your healing abilities. I will usually just party with random people to do quests and bosses. There is really no reason you should NOT be partying for world quests anyway. I have run non-stop with members through an entire area in probably 1/4 less of a time than it would take someone to solo alone. Good Times!

Essential Skills – Here I will list all the essential skills you will need as a support Sorc and my personal opinion on them.

Earth Arms – Increases all your healing spells by 100% and gives a 30% DoT healing effect when your heals critical. Max it and have it on at all times!

Healing Wave – Your Main healing spell. It’s not as strong as a Priest’s heal (43% vs your 34%) but is faster to cast and does decent heal especially when it crits.

Land of Recovery – This is where Sorcs have Priests beat. This heals all party members around the target for 10 seconds. Very useful against boss AOE attacks as well as just regular mobs. Sometimes in dungeons and parties I can cast this spell and then just sit back and do nothing and watch my party members fight. This spell and Healing Wave are going to be your bread and butter as a Support/Healer Sorc. Cast LoR under your tank our party and then spam Healing Wave/Rejuvenation. The cooldown on this spell is as long as the spell duration so you can cast LoR and then spam Healing Wave/Rejuvenation or even DPS in between LoR casts. The animation and effect actually lasts a little bit longer which means you can always have a LoR on the ground (which you should anyway!). I always have this spell cast under my Tank’s feet. I will usually tell people to group inside LoR when AOE attacks are coming. I’ve saved many members with this spell whereas I have seen parties wipe while a Priest struggles to maintain heals on the tank and other members in the party after a devastating AOE attack. Also a side note, LoR can Crit meaing massive AOE heals! Level 5 all the way on this skill!!!

Rejuvenation – There is a lot of debate on the usefulness and effectiveness of this spell VS. Healing Wave. Although the description reads “Instant Cast” there is a small delay before the heal hits. Simply put this spell is one big slow hard punch while Healing Wave is a set of small quick punches that do the same damage. However, the smaller punches from Healing Wave get faster with haste/vigor gears. I have this skill maxed just for fun to see the high critical heals. In emergencies I recommend using Healing Wave and then following up with this spell to fully heal someone. Leave this at level 1 and spam Healing Wave or Max it if you like to see high critical heals.

*Updated Meditation – As one of the posters stated below this skill only increases your CRITICAL Heal amount, which is pretty low and not worth it. I was mistaken when I said this increases your Critical Heal chance. I must have gotten a bad skill description from somewhere. Leave this skill at Level 1.

Earth Shield – Increases defense of you and your party members. The only party buff Sorcs have and since they lack blessing or other protection skills this skill is a must. MAX it!

*Updated Deluge – This skill works just like a Priest’s Sanctuary skill. It casts a powerful AOE healing spell over 10 seconds. This is your “oh *oops*” healing skill and combined with Land of Recovery you can pretty much keep your party’s health at 100% through boss fights. Level 4-5 is essential in raids.

Soul Bind – This skill is basically just a Priest’s Resurection skill for Sorcs. Again, another skill that is heavily debated. Before it was patched this skill was definately worth maxing because of the low cooldown. However, now with the waaaayy increased cooldowns people just leave it at level 1 since you won’t be able to use it more than once during a long boss fight anyway.

Soul Cleansing – Debuffs in this game don’t last very long and I have never had more than 2-3 debuffs on me at a time. Level 1 is good enough for this skill.

Conclusion – So there you have it a Support Sorc in a nutshell! In a skilled player’s hands a Healer/Support Sorcs can be just as good as a Priest. However, they are a little bit overshadowed since they are not a devoted healing class like a Priest and hence lack some essential skills such as Blessing, Assumptio and Coloseu Heal. They have Priests beat, however, when it comes to doing damage and awesome AOE healing. Many people will still shun Sorcs as a main healer or downright refuse to party with them. But I think once everyone realizes that Sorcs can stand in the ring with Priests when it comes to healing they will be more accepted in Parties. I have had a lot of fun with this class partying with other people and doing dungeons as a main healer. I look forward to testing out my Healing abilities in Random Hard Dungeons and Raids. If you are playing a FS Sorc don’t let the naysayers put you down. Once they realize the greatness of a Support Sorc they will change their minds.

Thanks for reading and feel free to share your thoughts.