Hellstorm is a unique, 120-person PvP battleground available to players level 30+. The entrance opens at 21:30 (Server Time) and remains open until 21:35, a five minute window so players must hurry to speak with the Battlemaster in Starglade to join in. The battleground will end at 21:45.

Players will enter Hellstorm according to their level, one battle for players level 30-80, and one for players level 81-120. Upon entering, each player is given a five minute buff, during this time they may not attack nor be attacked. After this buff wears off, the battleground is a free-for-all death match. Players names will not be visible during this time. In order to win a prize, you must be on of the few remaining characters at the end of the battle. If you are defeated during battle, you will be transported back to Starglade and may not re-enter until next time.

If more then 3 characters are still standing, each will be awarded a Participation Pack. A Third Place Pack will be given if only 3 players are left standing, a Second Place Pack for 2 left standing, and a First Place Pack for only 1 left standing. These packs may be claimed by speaking to the Battlemaster in Starglade. However, players must remember not to leave the battleground before the event is over or their rewards will be forfeited. 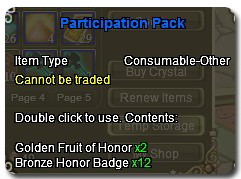 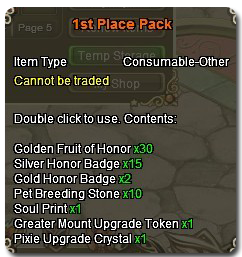 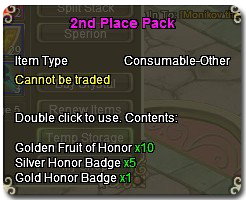 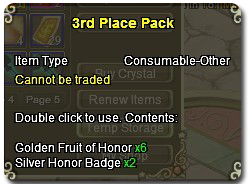