Hello everyone!
My gaming name is Nazgul and I play on server 14. I have tons of guild mates and people in world chat constantly asking me about mage advice so I thought to write a post for mages! This is not the only way to build mages but in my opinion this seems to be the most viable as you go deeper into the game.

Class Overview
Mages have some of the best versatility in the game. They can be pure glass cannon crit mages or they can still dish out heavy damage as well as heal and take hits. My guide will focus on the later, which I like to refer to as a tank mage. Mages start to excel around the 40s and 50s as they have a nice balance between mid to late game to keep them competitive throughout the game play.

Pros:
*High Magic Defense-Mages get a passive ability that increases magic defense by 20% so there is no need to worry about going against other mages!
*Healing Abilities-Other classes may have healing abilities, but there is no healing ability as strong as the mages. Mages also get a passive that increases healing by 8%.
*Area of Effect (AOE)-Mages also have the most potent AOE abilities in the game and this is our comfort zone for damage. Mages come in, AOE nuke and let their heavy single target damage friends do the rest!
*Catacombs Survivability-Catacombs is a labrynth that pits you against foes that get tougher the deeper you go into the floors. Mages have some of the faster clearing times in here because of their strong AOE and just as strong for survival as they can also self heal and stay alive longer.

Cons:
*Low Physical Defense-Mages do not gain a boost to physical defense like the knights and archers leaving them vulnerable to physical attacks if not careful.
*Low Health Points-Mages do not gain a boost to health either like the knights do. Balancing out a mage’s defenses and health play a crucial role.
*Weak Single Target Damage-While we excel at the AOE damage, we lack in the single target damage. We do have a few abilities, but those should be reserved for PVE situations as PVP you will rarely get a chance to build enough rage.
*Slow Rage Buildup-Mages will gain 8 rage per attack which is fairly lower than the other classes. 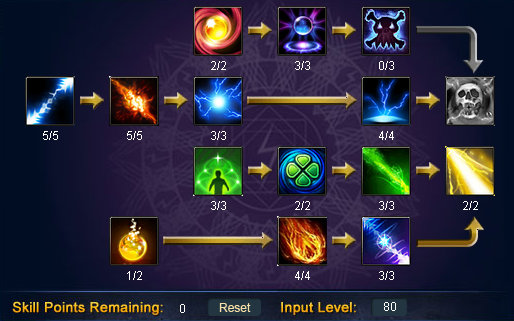 Lightning Bolt– Core damage ability. This ability grants 6 rage when attacking and should be used early and often for rage generation. Level this up early and often.
Rain of Fire-This is the center piece of your AOE damage. level it up at each possible moment. You will notice a huge damage increase between level 3 and level 4.
Heart Element-One of the first key passive abilities you get. Make it a priority to maximize these 2 skill points first to gain additional 2 rage per attack.
Mana Master-Another key early passive. in conjunction with Heart Element, Mana master should be prioritized to be maximized early to boost magic attack by 15%.
Restoration-This skill will be your best friend in arenas and catacomb runs. this is your main healing spell and 2 points should be taken early to gain the 10% damage reduction bonus and maxed at a point you feel the need to upgrade.
Healing Empowerment-This is the passive that will increase your magic defense by 20% and healing by 8% at max level and should be prioritized to be maxed out around mid game.
Castinador-this passive allows us to go down the bottom line in the tree and should only be taken 1 point into. At level 1, you gain a 6% chance to reduce the next abilities rage by 20 points. Level 2 is a minimal gain at 8% and why no other points are needed here.
Meteoric Destroyer-This ability ranks among Rain of Fire for key AOE damage. It is weak at first but picks up strength into the later levels as it gains a 25% damage boost and 35% chance to deal an additional 800 damage. This ability should be started to level up in the 40s but take priority abilities like Rank 5 of rain of fire and rank 5 of Lightning bolt first.
Delphic Thunder Frenzy-This ability is purely for PVE runs as you will hardly get the rage build up needed to get a cast off in PVP (especially with the knight’s intercept ability). Take a point here as an option however I would hold off till later on in the game.
Thunderer-Is a great single target damage ability that also gives a 50% chance to slow casting times by 100% (does not work on world boss). The lower rage cost compared to Delphic Thunder allows for it to be a possibility in PVP, however the rage would be better spent on healing and AOE abilities. Take a point early here but like Delphic Thunder Frenzy, I would recommend holding off till later on in the game.
Suntoria-This is a nice ability for your tanky friends as it allows your team to regenerate % of their HP at the start of their attack. Take a point here mid game and finish later on.
Purification-This is mostly a filler ability to be able to move down the tree however the ability to remove 3 debuffs for everyone in the team will play a nice role in specific boss fighting. Take a point here later on and max later on.
Blessed Light-The big AOE heal of the game that can really make the difference between winning and losing vs group arena and multiplayer boss fights. This ability heals everyone for a substantial amount of health and boosts everyone’s rage by 10. This ability should be gained in late game play as it will be your heavy rage support ability that requires a fair amount of rage. Take a point here after getting a point in suntoria and purification and then will be able to get the final point after suntoria and purification are maxed.

Critical
Magic Defense
Charisma–please note that if you chose to use these that it should be taken later on in the game to help with troop health points.

Gemming a mage properly is half the battle to winning. If you are willing to cash and buy sockets, it is recommended that you gem 1 magic attack 1 physical defense and 1 health into each equipment item. The magic attack will help boost your damage and healing power, the physical defense will help to close the gap on mage’s naturally weaker physical defense. This also applies to the health gems as well. For those of you who want to play without spending cash, the balancing task will be tricky but still possible. Make sure to prioritize your magic attack gems, put 1 health into each trinket slot and 1 physical defense into each ring slot (you do not have to how ever I find this easier to keep track of). As you get different sets of gear, you will vary in how many slots the items have (though usually it’s 1). They also give you 6 socketing tools (9 if you are VIP) and those should be saved for your level 35 PVP set at least.

Refining
This also plays another key part to your gearing and can really help you make up some health and defenses or boost your attack. If you plan to buy balens to help with gear, locking desirable stats before refining will help you custom pick stats to keep and which to roll the dice on. Honestly, I would not advise doing this unless you are willing to spend a lot of balens as the random generation of stats can lead to using a significant amount. When it comes to finding the right stat, it really depends on how you want to play. I took stat groups that give health and or endurance (both health), magic attack, magic and or physical defense, and possibly critical. My gear does have some critical refined into it however, it is not something to prioritize over health, attack, or defenses and should only be taken as a bonus as long as the other priorities are met.

Gearing
The part everyone loves! Gearing is a simple but complex part of the game. For those of you who can spend the time doing arenas and battle grounds, you should buy the insignia PVP gear, and skip on the PVE gear. The PVE gear will be hard to gather up for and would be recommended for those who are of different time zones and miss out on PVP events, willing to spend balens to build gear (will be very hard without it), and or those who do not care for the PVP scene. If you go toe to toe between the 2 gear sets, (as I have many times on my server) the PVP gear will win out in duels and arenas to those in full PVE gear for the fact that the PVP gear gives a -1000 Magic Defense mitigation and 30 starting rage. For your rings and trinkets, if you have not bought 5 dollars of balens for the 2 yellow trinket items, it is recommended that you use your crypt tokens that are acquired from catacomb runs to purchase rings and trinkets starting at the level 30 set and up.

Astrals are a bit hard to pick out what is the best options for. This is where the customization of the builds can greatly vary especially since it is dependent on whether or not you can even find what you are looking for. I have told everyone that asked me on the server, your core astrals should be attack and both defenses. Again you are a mage and your job is to deal damage so you always want to increase damage when possible. You may be wondering that if mages have such a low health why not grab a health astral? like any game that involves tanking and defenses, your health point value will always be greater when you have defenses to back it up. If you were to have significant health with low defenses, it will do you no better and you may even die faster. Having higher defenses with low Health really helps you be that super hard mage tank. Instead of getting hit for 3000 or 4000 you are looking of seeing a max of 2000 and change with the average being in the low 1000s range. For the optional astrals, that is where you can play around with your build. Some mages prefer the higher crit rate for the critical heals and damage while others may prefer the health and flat based damage for a guaranteed damage increase. You can also grab flat damage reduction and health too. In the end it is up to you to decide if you want to go more tanky, more bursty, more sustained, each having their pros and cons but all very viable and very strong.

This concludes my tank mage guide and I hope you enjoyed it! If you have any questions feel free to seek me out on my server or post a question here and I will try to reply back. Also a nice little note for the trolls, I spent the good part of 2 hours writing this out so if you have anything bad to say, please do it in a positive constructive manner as I spent the time to write this and not you