As some of you might have noticed the mages seem to do alot of dmg to us knights, since they are basicly our Counter, this will actually give you a chance to beat em in the group arena. + its usefull for fighting WB at the lower levels.

Gonna be breaking this down in to some points what stats would suit the best for this on items and what Astral’s to aim for.

This will be up to lvl 40, will most likely update it later when i get higher my self also.

Slasher 4/5: Used for rage building + decent amount of damage without to much cooldown on it.

Delphic Destroyer 2/3: Massive amount of dmg, if you time it right with the +50% from 1min combat, and start combat with Slasher to build up the rage faster

Heart of Rage 2/2: Simple enough, to build up your rage faster, and your Ultimate Slasher wont remove rage from your pool.

Combat Master 3/3: You want that P.atk bonus, for the more damage dealth.

Agoran Shield 2/3: Can be very usefull if your getting hit alot to pre-long the fight for your team to deal some extra damage.

Enchanced Block 1/2: 50% chance to heal for 4% of health is still nice add when using the Divine Blessing, improving your life span with 20%

For equipment, you Primary stat will be Offence, then Defence. will list them in the order I find them most usefull.

Power: Not only does this give you P.atk, but it also provides you with P.def

P.atk: and ofc. you get this for the more dmg, faster you kill = less dmg you will actually take, Offence is your best defence.

Crit: as far as ive noticed, this skill doesnt just improve your chance to crit, but also your critical damage.

Endurance: 1 point gives 20hp, it actually provides you with more health then “HP” does. and insted of getting P.def/M.def this works both ways.

Defence: 1 point gives 4 M/P.def its usefull for pumping your BR and survive longer.

Block: its a good stats, for the defence way to avoid damage as well as you skill that provides you with a chance to heal up, later 100% chance, and with the Health span expanded from life gems, endurance, and Divine blessing.. it will heal you for more when you block/dodge.

M/P.def: Purely for protection if you dont have Defence stat, no need to go further in to this.

What Gems should you go for? well, theres basicly a red line to follow in all of the thigns im saying here, your primary goal is to provide as much damage as possible, with abit of survival, so theres only gonna be 3 primary and 1 secondary Gem on this list.

P.atk: More damage output once again, it is simply that easy.

Crit: And again more damage output, thos crits can and will turn the tide.

Life: This is one of the best survival gems for Knight since it expands your health pool, and with +20% from your Divine Blessing. + Daru Engraving improving it further.

M.def: Reason why this is secondary is because our armor parts actually give so little M.def it can be usefull.

Now the Astral’s Part, this is really about how lucky you can get as well with the amount of gold you have in your pocket.

Pristine Sniper’s Edge: Provides with higher chance to critical hit, and also as I’ve said the damage when doing so, giving a higher dmg output.

Pristine Brilliance: Gives you 500 more Health per level, and again higher health pool works good against but Physical and Magical attacks and not just 1 of em, also against
WB for more hits.

Enhanced Regeneration: 10% chance to heal for 10% of the dmg you do (+10% per level), well think about this, you have a Good health pool with +20% health and heal from Divine Blessing skill, while your dmg is high, and some decent amount of critical, do the math.

Pristine Enshieldment: Provides you with more Block skill for avoiding the damage+healing your self cause of the “Enhanced Block” skill.

Tip for the Arena:
1) If your playing on team with a mage, make sure they use their Rain of Fire first, that way your “Ultimate Slasher” skill will target the one with least health, and most of the time, that will be the enemy mage hiding in the back, or the archer, turning the fight really fast to be a 3v2.

Hope someone can use this, since this is actually the first guide I’ve ever made, and that says alot considering I’ve been playing Mmo’s for well over 15 years ^o^ 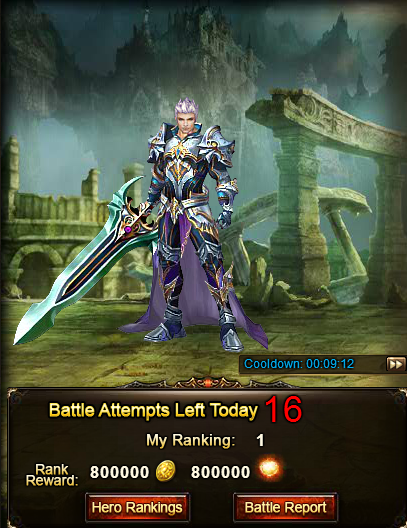 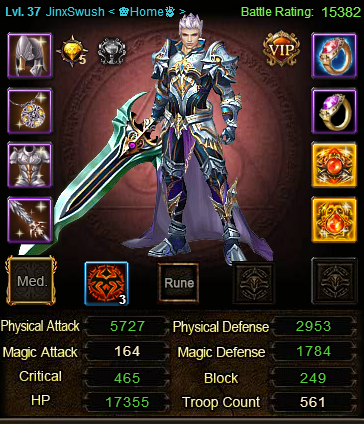