PART I: GETTING STARTED CREATING YOUR HERO

When a player first starts playing The Lost Titans, he or she must choose between playing a male/female, and then customize the character’s hairstyle, face style, and his or her profession.
The hair and face style will directly affect what artwork will be displayed during conversation windows with non-player characters (NPCs). The profession determines what skills and weapons a player is able to use during gameplay.
The main classes that a character can choose are Warrior, Archer, and Mage.
Warriors wield swords and fight in close combat.
Archers wield a powerful longbow that can knock enemies back from afar.
Mages wield the forces of the arcane.

QUEST THROUGH WITH QUEST GIVERS

Through mainline and side quests, players will discover that the world of Aristos has been deeply disrupted by the disappearance of Hyperion, one of the two Titans that kept balance in the world.
As the player engages in the many tasks given by non-player characters with exclamation marks on their heads, players will gain rewards and benefits from completing the quest, whilst searching for Hyperion.
The quest system has been revamped to not include accepting quests for the main quest line, thus allowing players to jump straight into action through pre-accepted quests which are stored in the quest log.
How players work through the quests will determine the type of character you will be in the land of Aristos.

As players grow with experience, they will have the opportunity to level up and become more powerful physically, mentally, and intellectually. They will grow to the point where they will be able to challenge Ophion himself!
There are also other ways to grow. One being, through weapons upgrading. Upgrades are available
in-game to help boost a player’s weapon. It’s remarkable how just a few upgrade points can make such a huge difference when it comes to fighting groups of enemies, or a powerful boss! Players can also imbue gems with magical power. Changing your armor and weapons will also allow for a physical appearance change. As players move into higher levels, their armor and weapons will become larger and more complex.
Upgrades, enchantments and items can also be attained for in-game currency.

When playing The Lost Titans, knowing the right controls will determine if you live or die.

These are the key controls one should become familiar with to become successful as a protector of light. 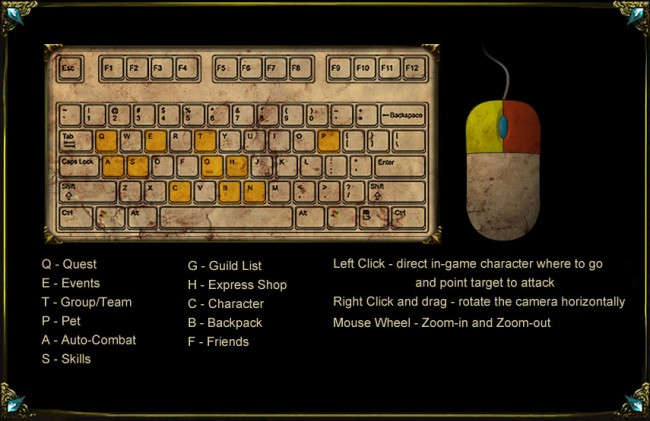 The hotkey bar is linked to certain buttons that can provide access to skills that are critical to success in battle. 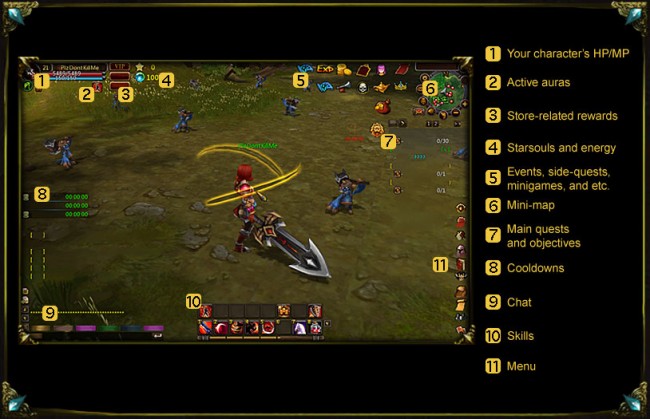 PART III: PLAYING TOGETHER
Journey with your friends and allies, oppose enemies, and win great rewards!

Join groups, join guilds, chat and make friends in your House.  Allies will be great aides in low level dungeons.
Friends will watch your back when wandering the world, while also encountering conflict with members of other Houses. You can make friends by adding players to your friends list, and also join groups and guilds through the usage of the in-game menus.

Players, level 15 and over can join a guild, and are only allowed to join one guild at a time. If the guild only consists of one member, the guild may be disbanded.
To start a guild, a player must reach
level 20 and purchase a Guild Scroll, worth 500,000 silver.  A guild can hold a total of 200 members.
Although a guild will start at level 0, the guild will level up through development, which involves members donating a tithe of silver and gold. A donation to the guild is rewarded with contribution points, which can be used to buy medallions.

THE DEEP SIDE OF THE LOST TITANS

Leveling up in The Lost Titans opens up a number of fun opportunities for players to explore deeper elements of the game.

In the game map, there are two kinds of regions: the ones in green which are the “safe zones,” and everything outside of the safe zones, which are dangerous areas where PVP exists. Players can attack members of other Houses.
Through PVP victory, a player gains reputation points. With enough reputation, a player gains titles and achievements in the game, and earns a higher salary.

When players hit level 15, they can qualify to enter the Arena – a place where players will combat opponent in an effort to make the list of the top 20 fighters on the server.
Every day at a designated time, the top 20 players will be rewarded with abundant silver and items.

Guilds are able to challenge each other for city titles, quest bonuses, and daily rewards.
To arrange for a guild battle, a player can register through the guild interface.
To enter the battlegrounds, players can find the guild battle manager in the Guild Hall in the City of Light.