2. Classes: You may choose from the three classes of warrior, mage or ranger. Each class has different combat abilities and skills, and your class selection will affect your playing style in future.

Warrior: The warrior possesses powerful close-combat abilities and indomitable tenacity, capable of dishing out massive amounts of damage while enduring the blows of numerous more. An immense amount of health guarantees that the warrior has the most survivability of all classes out there.

Mage: As a master of the elements, the mage possesses the highest burst damage of all classes, and can cast conflicting elements on monsters of various elemental attributes to inflict maximum damage. However, the mage’s inherently low health and long casting time limit the mage’s true damage potential.

Ranger: The most agile of ranged killers. Staying outside the enemy’s attack radius while still maintaining bow attack range is a fundamental of ranger survival. Powerful ranged attacks complimented by a hunter’s ingenious traps – these are the reliable tools of a class of precision. Just like the mage, the ranger suffers from a lack of health, but is an unstoppable force of destruction under the protection of party members. 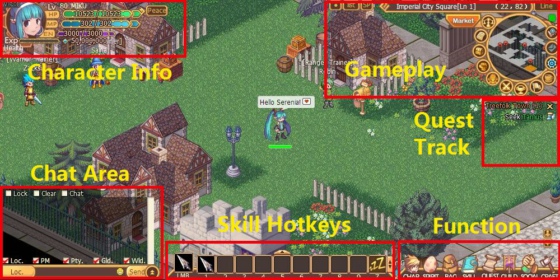 4. Make Friends: In Serenia Fantasy’s friend system, you can not only chat with friends more efficiently, you may also add foes and blacklist more unsavory characters. This allows you to track your enemies down, or avoid harassment from annoying players. Hitting the “Friends” icon on the game interface or “O” brings up your friend interface. You can click on targeted players, names in the chat window or in the guild list and add them as friends. Or you can click on the add friend icon in the friends interface, then input the name of the person you wish to add as a friend. When the other party agrees to your request, both parties will become friends. As for adding foes and blacklisting, only your confirmation is required. The foes interface records the times when you were killed by other players you assigned as foes. When your foe logs in, the system will prompt you that a foe is online. Messages from blacklisted players will be automatically blocked.

1. Initial Gift Pack: All players who enter Serenia Fantasy will receive an online gift pack upon login. The gift pack will start counting down after login, and players will be prompted to claim the prize once the countdown ends. The next countdown begins once the current prize has been claimed. While countdown times increase as players claim more prizes, the rewards will also increase in value. Gift packs may only be claimed 7 times daily, and each created character may claim 3 days’ worth of online gift packs.

2. Initial Quest: Clicking on quests in the game interface displays your current quest status, including progression, acceptable and completed ones. Click on the NPC name displayed in the quest to automatically move there.

3. Initial Teleport: A nifty feature that Serenia Fantasy offers is the teleport feature, for when you don’t feel like walking during grinding or questing. Click on the flying shoe icon in the quest tracker, and by deducting Mini Teleport Crystals, you will be instantly sent to the NPC. You can also open the world interface or the search interface of material drop production, click on the position you wish to go to and instantly teleport there.

4. Initial Party: Party battles greatly increase the combat efficiency and rewards yield in the game, and makes the game much more fun. The maximum number of people in a party is 5, and parties grant monster EXP bonuses. In a party, the more the members, the more EXP rewards granted. When players wish to group with others, they can choose from players within the area where their character is, then click on the player’s name in the chat window or from the friends list to invite them. When invited by other players, an invite will pop up on the game interface, and players can choose to confirm or decline. When in a group, the group leader will be indicated by a yellow tag above his head. When two or more players are grouped, the bottom of the player’s portrait will turn into a party member info display area. When clicking on a member in the area, a group options menu will pop up. The “Follow Target” option is an exclusive party function, and “Change Leader” and “Kick from Party” functions are for leaders only. Party members are indicated by different colors from other players on the mini-map. When the leader goes offline, leadership will shift to another party member. Members won’t leave the party when they go offline, and must be removed by the leader. If players wish to leave a party, they may click on their own portraits and choose “leave party”, or the party leader may choose “leave party” or “disband party”.

5. Initial Skills: Learning skills can increase your combat prowess. When you reach Lv 5, you will automatically accept a quest to learn skills. After completing the quest given by the NPC, you will receive a skill book. Double-click on it to learn your skill. After that, you can drag the skill from the skill interface to the hotkey bar for usage. Also, players can use Magipoints or cast skills on monsters to increase skill familiarity.

7. Initial Auto-pilot: There are two methods of auto-pilot in Serenia Fantasy, one of which is quests where you auto-pathfind and killing the corresponding monsters. On the right of the game interface, there is a name on the quest tracking panel where you can click to automatically find your way to where the monsters are and kill them. The other method is where players can move to a location on the map with monsters they wish to farm to deploy auto-pilot. When you reach the place where you wish to deploy auto-pilot, click on the auto-pilot icon near the mini-map at the top right to open the auto-pilot interface. You can assign what monster type you wish to kill by checking the respective monster on the interface. You may begin auto-pilot when you complete the action. In the auto-pilot settings, players can choose skills and potions to use, as well as loot selection depending on their conditions during auto-pilot. They can even view monster attributes and locations based on their loot by determining the items they wish to obtain.

8. Initial Instance: Serenia Fantasy’s instances provide stages that can be played alone or with a party. You must be in by yourself or in a party to enter a unique stage. Upon entering the instance, you can complete instance objectives to access further levels, finally completing the instance adventure and obtaining valuable stage rewards.

1. Spirits: The spirit system is a unique gameplay system where players can take the form of spirits. Players can also increase character stats by equipping spirits, and use the unique ability of the spirit. Many monsters can be equipped as spirits by players in the game. All players need to have is a spirit egg, and double-click on it to get a chance to obtain spirits. Each monster has its own respective egg, and elite monsters in the game have a chance to drop the respective spirit egg. Bosses will drop boss level spirit eggs.

2. Wings & Mounts: There was once a time when heroic steeds and the wings on the backs of divine maidens were spiritual items that could be nurtured and groomed. As your crafting level increases, mounts and wings will not only provide you with bonus attributes, but will also look glorious. Under your consistent care and nurturing, the small pony and frail wings that you have will one day storm the fields or take to the skies. Oh how proud you will feel at that moment. When players equip mounts and wings, the equipment effects will be displayed on the game interface. Players can increase mount and wing star levels to upgrade their appearances and become more resplendent and valorous. Stats will also increase.

3. Costumes:With the magical costume change system, Serenia Fantasy can aid you in achieving the look you’ve always wanted. With an array of choices to choose from, you can forge the appearance of your favorite cartoon character and cosplay right on your browser.