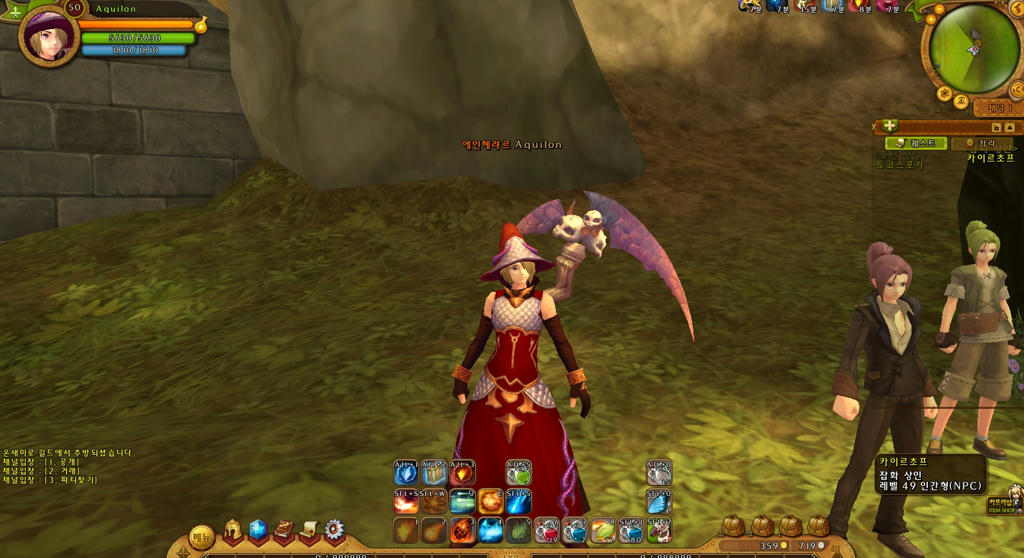 I play as Aquilon on the Korean server, and the armor you see is lv 50 raid (epic) equipment for the wizard. I think it helps my credibility.

The wizard is a very BORING class. Movement is almost non existent, and most of the battles are fought with two keys: hot keys of fire bolt and fireball. The only area where it shines is it’s flashiness. It’s damage is lower than rogues, rangers, sorcerers,attack priests, but equals with the assassin. (In other words, lowest or 2nd lowest of dealers.) People know you exist because you jump around the map with teleport and survive random moments with ice wall. Most people (including me) play this character just because nobody plays it allowing free access to parties. You might ask, “If it’s such a bad character, why do parties take wizards?” Well my friend, sorcerers and priests want the 10% int buff… and that’s about all they ask you to do.

How to Max out Damage

DOT (Damage Over Time) damage (caused by Fireball, Fire Arms, Fire Flower) is where most of its damage comes from. However, DOT damage will be overwritten by any wizard who uses the same skill. When there are more than one wizard in the party, even the assassin will out-deal the Wizard, putting the Wizard just above the tank characters. (there should only be 1 wizard per party)

ie. When going against a boss, and the DOT effects of Fire Flower, Fireball, Fire Arms are damaging the boss, whoever uses Fire Flower will overwrite the Fire Flower DOT damage. (same with Fire Arms and Fireball)

For those that might have questions about why I didn’t level skills that you might think are useful, here’s a quick tip on why not.

Cold Bolt – This skill is used with lightning bolt and frost diver in the early levels, but it is outclassed by the fire bolt due to stacking of Fire Arms and Dragonology, even without the help of pyromaniac.

Frost Diver – This is also a skill used mainly in the beginning. However, being unable to freeze bosses, it is usually thrown away.

Water Arms – Due to DOT damage, water arms is not used. Additionally, 10% damage reduction is unnoticeable for wizards.

Frost Nova – Truthfully, this is a very useful skill, however it preforms very well even at level 1.

Ice Wall – 3 minutes is a long time to wait, especially in battle. However, 3 minutes is enough to use twice on a single boss. Anything other than 3 minutes is too long, and you might as well invest 1 in Ice Wall at that point. However, having no true survival skills other than this, it is necessary for you to invest 5 points in this skill.

Lightning Bolt – It is also like the cold bolt. It is very soon outclassed.

Firebolt to Dragonology should be self explanatory.

Pyromaniac – This is a skill often overlooked. It takes about 7-8 attacks to reach 100, which at that point, gives you a 10% cast boost. This might not seem to be a lot, and people tend to use fire explosion the second it reaches 100. Using this buff allows fast recasting of fire bolts, which in the end pays off more than fire explosion. (the users of this skill commented that “it’s a skill that can only be felt by those who use it.”)

Inferno vs Meteor Storm
Inferno is a good skill, because it gives all the mobs a fire flower effect. Even at level 1, it gives the fire flower effect of the level of your fire flower. On the other hand, Meteor Storm is a skill that hits a targeted area, but is heavily affected by lag and also takes longer than fire flower. In the end, you do just about as much damage with either one. (even without lag) You should just pick one and only one because you’re not there to take out only mobs when in raid dungeons. (gathering mobs is harder than throwing fire bolts one by one)

*It’s also the sorcerers job to attack mobs with Lord of Vermilion, which also does double damage when the enemy is encased in ice, so hit fire flower, use frost nova, and get the hell away with teleport and let the sorcerers do their job. (And yell at them if they don’t.)