Before we go into the main topic, we need to understand a few basic concepts regarding battle formation:

When you upgrade your warship from Miss Love Duck to Marine Battleships, you will unlock a new crew spot.

*Note, at the moment we are only able to take in 5 crew into battle. However future updates may allot 6 crew members to be taken into battle.

Finally after understanding the basic concepts above, we can now explain the importance of battle formation:
As player’s level rise continuously, we will open up new areas of the map which consists of higher level crews for us to recruit, which makes the battle more interesting and challenging.

1. Buggy’s Streaming lineup Battle Formation
A lot of the guides talk about how impressive Buggy is and that everyone wants it. Reason is due to it’s active skill Spinning Darts. 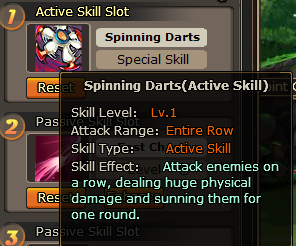 The superb agility stat of Buggy allows it to land the first hit in numerous battles, while during the second round it’s skill will 100% prevent a row of enemy from moving. Battle formations which player’s like to use are generally those which surrounds Buggy, even when you reach level 50 or even 70. Especially when you still have your Miss Love Duck Warship, the fixed battle formations will allow Buggy to demonstrate his full potential.

Battle Formation: Suitable for Sniper/Navigator
Targetting the fixed battle positions of our first warships, we place Buggy in the center column to allow maximum crowd control, as Buggy lands the first hit, he will be protected in the middle from any incoming attacks. Also Cabaji and Morgan have active control skills too, putting Jango at the bottom column will allow it to receive as minimum damage as possible.

Battle Formation: Suitable for Swordsman/Doctor
Swordsman and Doctor tend to have higher HP growth, also they both have defense related passive skill, in comparison to other classes they are more suitable to stand in the front line. The swordsman skill Mirror Soul and Doctor’s Holy Counter both have chance in inflicting additional bonus to the opponent.

The three rows of crowd control which consists of Cabaji, Mohji and Morgan will make sure the opponent will be stunned and hence extra round of attack for players. If you chose your main character to be Doctor, and if Janga is apparently slower than your doctor, then his special skill will replace the Doctor’s Aptitude Skill: (is available to discover at lv.40), which is:
Holy Blessing: Greatly raise all members of your side Physical and Magical Attacks. The effect will last for 2 rounds.
Hence you can choose to use Mohji with the aoe skill is a good alternative (or level 50 crew Pearl the Iron Wall)

2. Level 50 Upgraded Battle Formation
When players get to level 50, they should all by now level their warship to Marine’s Battleships. Where the usual cross formation will have an open spot at the top right hand corner. This change will weaken Buggy’s crowd control depending on how your opponent choose to alter their own battle formation, hence its’ the player’s homework to predict how their opponent will change their battle formation before battle.

Battle Formation: Because the opponent are likely to distract your own output attacks, hence it is best to place Buggy in the top column, Kuro’s agility stat is a bit higher than Buggy, hence when the opponent’s top column only has one crew member, you can rely on Kuro to destroy their top column through high chance of a double attack, then follow on by Buggy’s crowd control for the middle; However if the top column consists of 2 or more crews then make Buggy and Kuro both attack the top column for maximum damage output. The center of the battle formation would be Kuro+Buggy.

World Boss Formation:
In the game, silver coins allow players to raise the power of their crew and ships. Hence its very important to allocate the best crew member during the event to receive the best rewards. Due to the fixed skill output damage, it can be assured that Kuroobi and Morgan will deal 5000 damage during their active skill round, also Kuro’s double attack will add additonal damage, the battle formation as shown below:

Battle Formation: Due to the fact that theres a limit to how much crew we can hire, hence we can be sure that only few players will get these 3 and a half uber Damage dealers (Kuro will only count as half DD). However if you have Cabaji, Helmeppo, Alvida, then they are your best alternative to Damage Dealers. However since i have not researched enough on the other level 50 crew members, if anyone have insight on how to use Chew and Wapol, please fill me in with it.

*I just recruited Wapol to see how it is, it’s swallowing cannon does a steady 5k damage with stun on single target, so i guess its an advance version of a normal blue sniper with concussion shot.

The above is just a brief explanation on battle formations for players below level 70, since i have not played this game for a very long time, i might have missed out on alot of stuff, feel free to make comments or opinions, thankyou.

This Table is to give people an idea of how much it costs to upgrade warships, it’s not complete so if anyone can give me additonal details after Thousand Sunny it would be greatly appreciated. 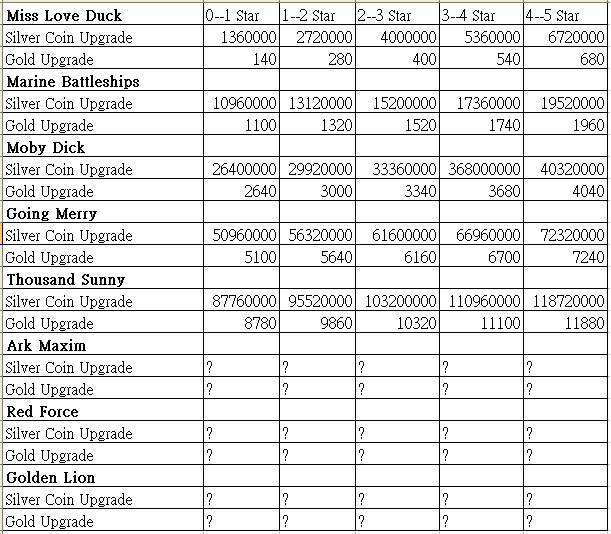 *NOTE: This Table does not take into account Crit Boosts while upgrading.

Below is a table of the list of shadows available and the exp required plus stats, if anyone know any data about SS shadows please inform me and i will add it in, ty. 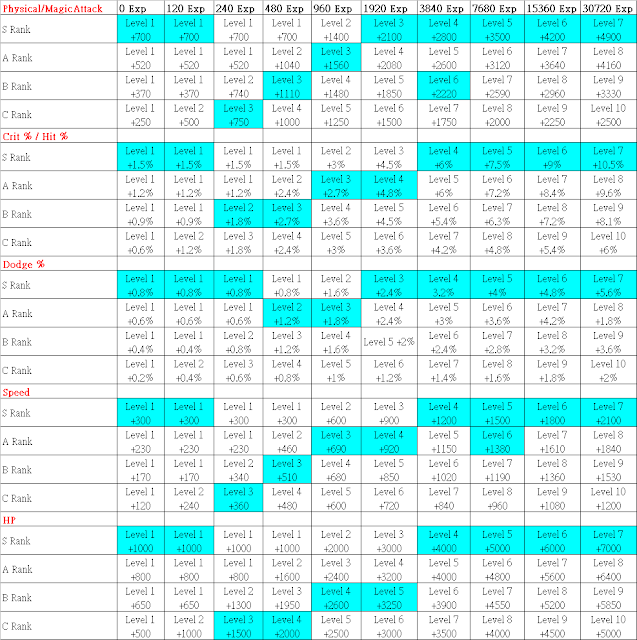 According to the tables, people can clearly see that as your low or high rank shadow is leveled up, by comparing the two and spending equal amount of silver, you can be sure that S-rank adds the most stats for sure. However due to some people with tight budget on their silver, they might not be able to level their high rank shadows that high, hence unable to get the best possible stats for their high rank shadows. This is where the highlighted parts in the table comes in, applicable for efficient silver usage, for those who are not able to get the best S or A rank shadows, this highlighted ones may be of some guide for you.