I have been playing illusionist for 3 months now and made my own skillbuild with experience and a total of 8 skill reset scrolls to make it perfect. It took me a lot of work to get my own playstyle, skill build and equip stats which fits my playstyle. To save you guys some work, I will share my experience with Illusionist.

3. Skills which you should get level one and higher if it suits you.

4. Skills which you should leave at level one

-Stuns on explosion of blades

– Required precise timing and the ability to keep your head cool

There are a few skills which you should max, I call them Key skills. There are no buts or ifs.

Nice skill with decent damage, superarmor and the ability to connect/start combos.

Nice skill with high damage and a fast cast time, can be used during combos and can be followed by other moves.

Fast cast speed, high damage (even with the nerf) and a really nice DOT. Can eat away a lot of the opponents health and can be used during combos.

Makes the blades explode, should I say more?

Does a lot of damage at max level, can be used to trap people and during Phantom Tornado you can use Blades and Fireball to deal some extra damage, don’t knock them out though. When Phantom Tornado ends the opponent gets launched in the air and you can follow it up with Phantom Uppercut to continue the combo.

Used to evade attacks, close in and gain distance.

Another escape ability to break combos, sometimes it doesn’t work if you get hit too soon after using it, but if you time it right it’s a really nice skill.

3. Skills which you should get level one and higher if it suits you.

– Phantom Blade (Level 5 as requirment of other skills)

I think you should leave it on one for the stun on the explosion, which is the best ability of this skill. It is hard to evade if you make it explode right after casting.

It does nice damage, can be used after Evasive Attack.

It’s useless to level it up higher than level 1 in my eyes, because of the 50% decrease in pvp, but if you have the sp you can level it a bit higher

Increasing the level makes it go faster, deal more damage, and get a bigger range. It’s an invisible blade (you can still see it if you know what it looks like, but it’s hard and many people fall for it). It’s an amazing skill which is worth the sp if you decide to level it

Main attack against moves such as charge skills, protective barriers and guardian enemies. Does nice damage and can be used during combos.

It’s only used as a shield and a decoy against enemies, because good player never get hit by it. I don’t advise you to level this skill up if you fight good people, but against casuals it can work.

Stuns when you rise into the air, does nice damage and can hit guardian enemies such as guardian (not all the time though)

Nice AOE skill which air juggles the enemy, I advise to level it up to level 2

Nice guard break which stuns the enemy for a short time, just enough to launch dark calling. Higher level increases range and damage. If you find yourself needing another guard break with good damage you should level this skill to max.

Required for Phantom Hand and also a nice grab to extend combos.

You launch a huge fist smashing through everything on it’s way in front of you, can hit guarding enemies, hit’s grounded and can launch your opponent out of the ring easily.

You grab the opponent and can do additional hits with left and right click, if you press it too fast it won’t do damage. Can be used during combos, if you want to combo with this skill I advise you not to do the additional hits.

4. Skills which you should leave at level one

Use it at the end of your combo to hit grounded people.

It’s only used for the stun, not worth to level up. Costs too much sp for a small gain in power and range.

You cast a protective bubble which makes you invulnerable if you’re inside of it. Nice to regain mana if needed. Just cast and wait till it’s end/opponent broke it.

No cast time, knocks enemy down and gives you superarmor when charging. Nice to knock people down.

Only used as combo starter which has a few uses, not too many though.

Another blade skill which travels forward, low damage but the explosion stuns. Not worth to level it up more than 1.

Gives you an extra hit on Mindflame, It’s a nice skill but costs a lot of mana if you level it up. Keep it level one for your mana.

5. Different Playstyles
Long range.
Basically you try to stay away from the opponent and use blades/fireball/phantom punch to keep the opponent away. Once they get too close you use Illusion Wind to escape.
I advise you to get a lot of crit if you plan to play like this, works great for people with a terrible connection.
Short range.
You try to stay close to the opponent to unleash devistating combos with skill such as Dark Calling/Phantom Ascent/Phantom Uppercut/Mindflame/Phantom Hand/Phantom Tornado/Spark Swing etc. If you’re at range you can use Phantom Razor and Phantom Punch to get closer to them combined with the teleport from Illusion Wind.
This is the way to go if you want some action and is the best way to get to the top. If you stay at range you’ll have a hard time beating rangers and other classes which dominate in long range. Best thing to remember is the super armor from Dark Calling.
6. Tips against classes
Fighters
– Blademaster
Don’t rush when you’re fighting against blademasters, block their long range attacks and attack them with skills such as Dark Calling, Spark Swing, Phantom Cry, Phantom Punch and Mind Flame to open up an oppertunity to knock them down when they’re close to you.
– Guardian
Play defensive, try to break their guard with spark swing and phantom punch. When they attack you in close range, use dark calling to start a combo. Dark calling is the most important superarmor skill against many classes. Don’t try to rush, stay calm and be patient.
– Warrior
Play Defensively, Warrior has many long range charge attacks, try to dodge those. When they let their guard go for a second you should use that oppertunity to launch some attacks. Use the superarmor of Dark Calling when they attack from close range. Watch out for the grabs.
– Berserker
Here is where it gets tricky, Berserkers have too many attacks that break guard. The way to kill them is keep them away from you and if they get close use Dark Calling for the super armor.
Hunter
– Assassin
Watch out for Shadow Dash, aim with skills such as fireball and if they get close, use the superarmor from Dark Calling. Watch their movement, because they have a lot of moves to gain distance fast and don’t get caught in their combo. Try to have Evasive Dash ready when he’s close to you. 1 Combo and you’re dead if you’re fighting a good assassin.
– Shadow
Much like assassin, but with faster attack speed, teleports and many superarmor skills.
– Ranger
Play defensively, don’t recklessly attack them. Dash forward with Illusion Wind and use Phantom Punch to knock them down. Get close to them and don’t let them gain any distance on you. Rangers dominate in long range fights.
– Scout
Here is the boring fight, keep distance and use your blades + phantom punch to attack. Use alluring illusion to distract the traps and you have to be really patient. Long ranged scouts can’t do much, there you have a huge advantage.
Shamans
Elementalists
When facing a shine Elementalist you have to stay evasive and try to combo them. They’re squishy so you can easily kill them. Their 1v1 power is pretty minimal.
When Facing a shade Elementalist you have to watch out, they have better close range skills than you and a faster cast speed. Keep distance and try to trick them with Blades and Phantom Punch.
Taoist
Blades are your friend. Blades break every charge Taoist has (except spirit rage). Block the charges if you didn’t stop them with blades and use spark swing to stun them for a bit.
Illusionist.
Here it gets tricky, fighting your own class. There isn’t much to say but watch out for the blades and phantom punch. The best illu will win (if there’s no lag ofcourse). Make use of your experience and beat them with it.
Warden.
Warden is really strong at long range with a lot of short cast skills. Be evasive and counter if they make a mistake. They’re  squishy enough to be punished badly for a mistake. Use Fireball to get rid of the shield which absorbs the first 3 hits. DoTs count too.
Slayer.
Slayer has some tricks up her sleeve. Watch out for the dashes, 1 of those breaks guard. They also got a couple of long range grabs and infinite combos. Don’t let them combo you, keep evasive dash and alluring decoy ready. Dodge the charges + grab and you will win for sure. Use blades to stop them and combo them close range.
7. My skill build
I don’t say that this is the perfect skill build, but it fits my playstyle. You can copy it if you want, but I might not work for you. If it’s too small you can hold ctrl and scroll 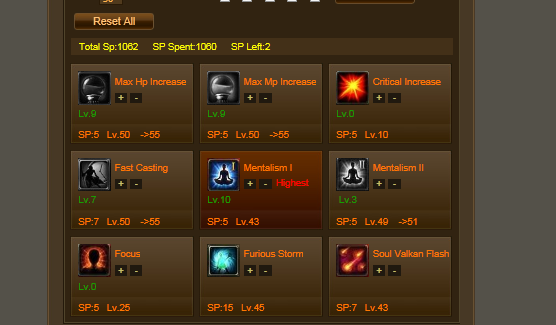