Simple advice for playing pub games that will make you and whoever you’re playing with better. This guide covers some basic guidelines for drafting, general tactics that will help you coordinate your team and win games, and advice that will help you play your role better.

Communicating with your team and organizing them to give yourselves the best chance at victory begins at hero selection. There are three main things you should generally limit and avoid when drafting a team.

Avoid double melee lanes. This means limiting your team to two to three melee heroes. This allows you to have a basic 2-1-2 lane setup with a ranged hero in each side lane. Unless a double melee lane has exceptional stun and damage combos or can put up with constant harassment, they’ll get shut down by a competent enemy lane with a ranged hero. Having three is okay (melee mid or melee jungler), but four will most likely make laning very tough and won’t work if the players don’t have good teamwork and coordination. An all melee team is almost always a recipe for disaster.

No more than one jungler, if any at all. If a player insists on jungling, make sure someone picks up a good solo hero. Don’t expect the solo lane to get a lot of farm as it will probably be a lost lane. Your lineup’s success depends on not feeding and losing the game before the jungler decides to join the team and be active. Hopefully your jungler will be active and help out other lanes and get early kills whenever possible.

No more than one carry per lane. The hard carry is the only hero that should be expected to just farm. Your semi-carries should at least be useful early and mid game by ganking or pushing towers. With any more carries, there’s just not enough farm for all of them. One or more of them will be useless and would have been bettter replaced by a support not dependent on farm and items. Your team will be too weak in the early and mid game and you’ll lose all your towers before your carries can get any items. Having no outer towers makes it even more difficult for them to farm safely, and the other team will have a massive gold advantage. Filling your lineup with good support, teamfight, and disabling heroes is much more valuable. You’ll be able to win the laning phase and not have your carry compete with anyone for farm and you’ll be able to win teamfights.

By following the three main points above, you’ll eliminate most completely terrible team compositions and at least have a chance to do decently in the laning and early phases of the game. With a good team composition to get you through the laning phase, you’ll be able to practice the strategies and tactics presented in the rest of the guide to help your team win.

Note: This was only written with normal level pub games with a team of random people in mind. Drafting for competitive games requires a much deeper understanding of the game, current trends, and the enemy team.

Dota 2 is a team game. If you can manage to get your team to work together and communicate, you’ll greatly increase your chances of winning. The following is a list of 12 things you and your team should do throughout the game. 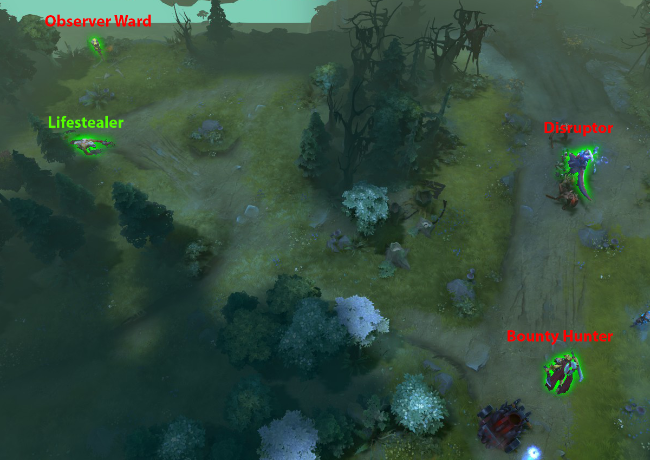 Watching the minimap and having wards can prevent an enemy from trying to gank. As soon as Lifestealer is revealed, Disruptor and Bounty Hunter retreat. 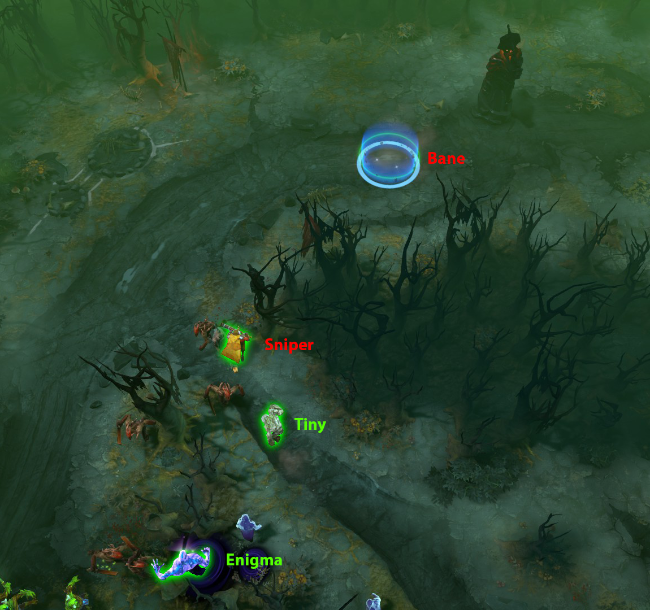 A Bane teleporting from the bottom lane to the top lane to help Sniper who is getting ganked by Tiny and Enigma.

The Dire team grouped and smoked up with pipe of insight already used as they’re about to initiate a team fight in the middle on Phantom Lancer and Meepo who are caught slightly ahead of the rest of their team on the other side of the river. 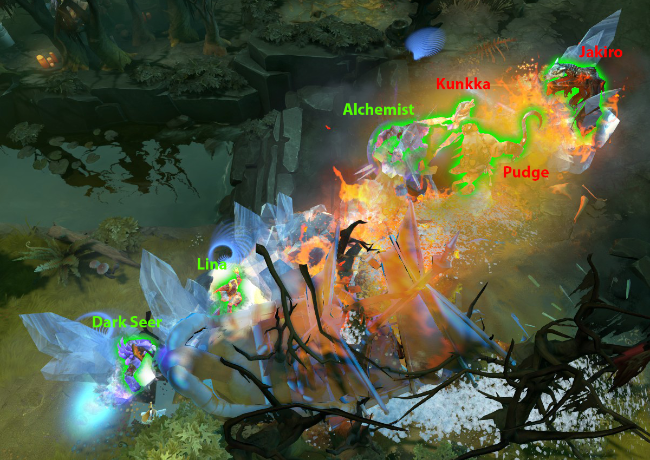 A good fight by the Dire team in terms of location and abilities used. Three Radiant heroes are caught by Jakiro’s Ice Path and Macropyre and Kunkka’s Ghost Ship is about to hit. 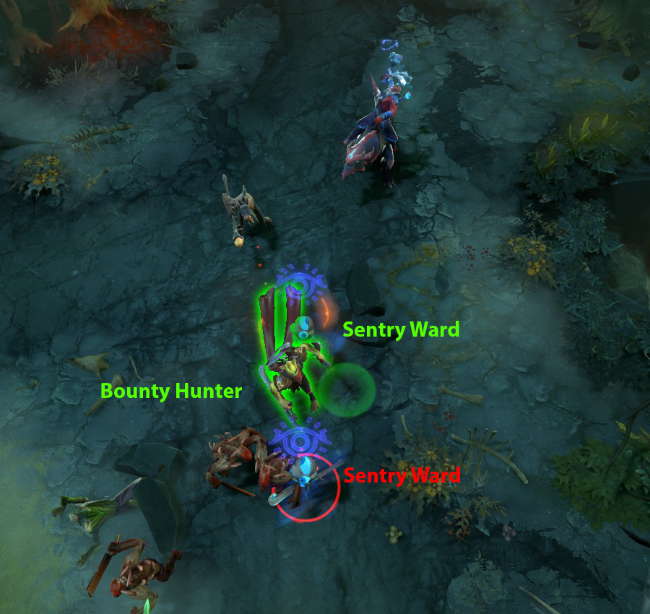 Bounty Hunter countering an enemy sentry ward with his own sentry ward. 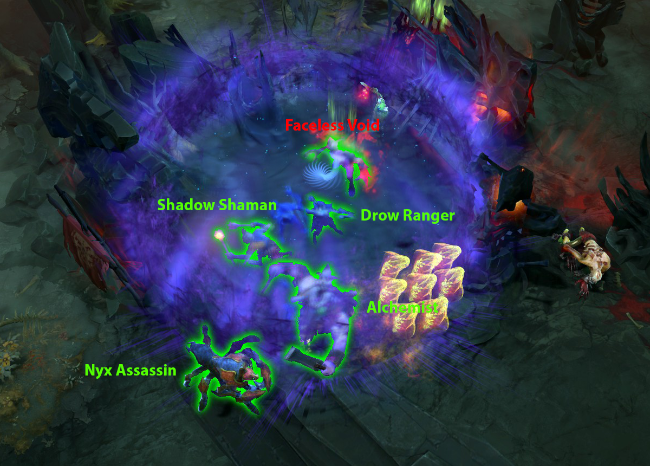 A bad team fight by the Radiant team. The entire team is clumped together and is caught in a Faceless Void Chronosphere inside the Dire’s base. 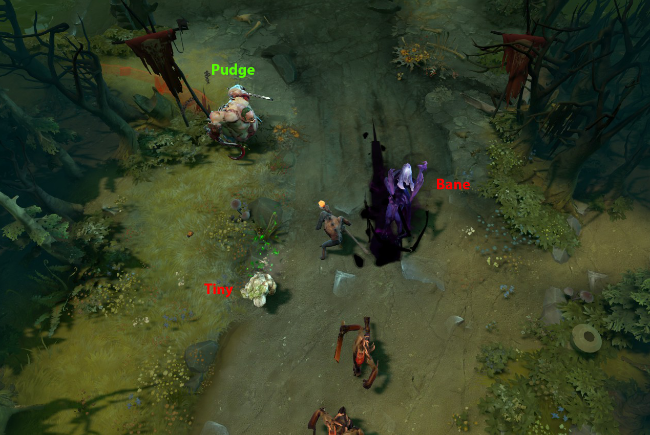 Pudge with a haste rune ganking a Tiny and Bane from behind.

Put your team in the best position to make the right decisions. Push, gank, and fight as a coordinated team and you’ll have a good chance of winning. Communicate these things with your team and it will hopefully get them to work together and prevent them from making dumb mistakes. You’ll lose less games you should have won, and you’ll win more games you didn’t think you could win.

The following is some basic advice and the mindset for playing specific roles.

Your team will be much more successful if you all communicate and play together and play according to your role. You can win many games by simply having everyone do their job and cooperating for the good of the team.