ok before i start i wanna say that the information here does not include those of the adv classes AS YET! but will work on it soon enough, this is just my own opinion on each class and how they should be built, and tips on how each class benefits, through stats, and skills, even for events.

Barbarian is the tank-class in this game, hence, why most skills add hatred and a large amount of skills are AOE, even though their melee (common gamer knowledge not something that’s specific to this game), their made to taunt and take hits for the group their in when it comes to dungeons and pvp events, they have a unique anti-crowd control (Crowd Control or CC) skill that makes them very good initiators, which, is what a tank should do.

You can go a few ways as a barbarian

1 – all points into endurance (works best with lord class)

2 – all points into strength (works best with berserker)

3 – 1str 2 end (Best for veteran depending what stance u might be focusing, since their like half tank half dps with their stances. Good for lord but personally not worth it, since the 1str each 1lvl doesn’t give THAT much damage to your character)

4 – 2str 1end (Best for veteran depending what stance u might be focusing, since their like half tank half dps with their stances. Good for berserker, doesn’t make u a tank, but makes u able to take a little more damage)

Lords anti-crowd control (Crowd Control – this is negative effects such as slows, stuns, sleep that kinda stuff) can be used for that extra umph when doing events such as GRB (Guild resource battle) and SB (Spectral battleground), for GRB just pop this baby when your at Zone1 and need to get into the safe zone quickly, and as for SB, if your trying to chase u can use this for the speed buff (like for mages who can get away with their darn teleport ><) or if you have the stone, use it to get away from everyone (speed buff + anti-CC).

Lord – this advance class is best for those seeking to annoying people with survivability, Lords are epic tankers, their skills are all endurance based so putting all points into endurance will in fact increase your damage output, which makes adding strength a total waste, why would anyone want a little more damage(adding some strength), when they can have more damage+hp+defense (adding all endurance). 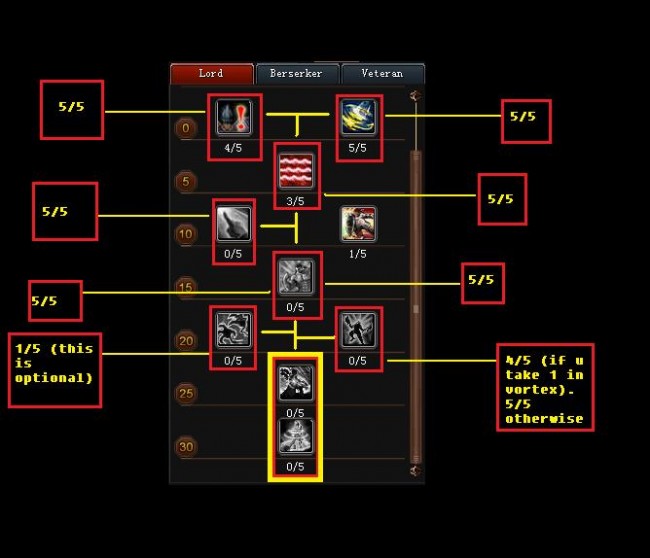 Berserker – this advance class is for the highest damage output as a berserker but completely destroys your ability to tank, basically it would make sense to build this class like an archer, i mean, their never gonna be able to tank, so why waste points in endurance? just full strength all the way.

Veteran – yep, hybrid, has 2 stances, defensive stance(increases hp) and a battle stance(increases attack), I’d say veteran is a solid way to go, i think the only down side is the stat reduction they suffer, but hey, it wouldn’t be fair if they had same stats as lord and berserk + their stances now would it.

Mages are the Heavy magic damage class who focus more on AOE’s and casting over time skills(depending on your adv class)
they have low hp/defense which they make up for with their high damage output, there is even adv class skills that help with their sustain through battle, Mages dominate in large group pvp thanks to their teleport and high damage AOE’s basically if you wanna kill players like crazy and annoy them by escaping with your teleport, mage is the class for you.

Mages go 2 ways, or you might as well just forgot about it

Mages adv chrono guard skill negates physical atk dmg between intervals, this is good for pvp and pve because u can at least live long enough to run away or teleport xD. Teleport also works great in SB (spectral battleground) for escaping with seal stone.

Warlock- so warlock info is so so so wrong, warlocks are not the AOE based advance class for mages, warlocks are made to take down single targets fast, thier like the archer of mages, Strong and fast single target attacks is what their based around.

Chrononaut – now these guys are the AOE based advanced class, they start with a strong low CD (cool down) AOE skill (moon beam) and they have skills the negates physical damage from them so they can survive longer in fights, thier next damage skill also is AOE and drag enemies to the center of the skill each time it hits them, so just use that and follow with moonbeam spam = gg bunch of dead bodies. 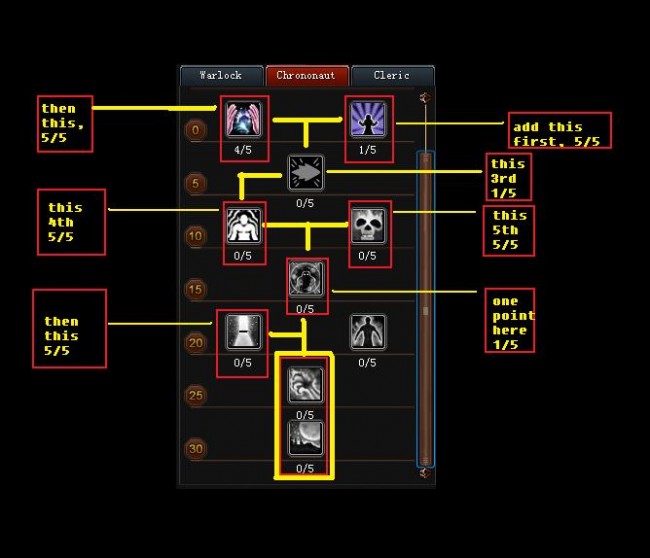 Cleric- the healers man…do i even need to? xD i dont think i do, let me know if i should lol.

Archers are the heavy physical damage class in BR their main purpose is to kill, and kill fast (or quickly over time) they also have skills to help them maneuver through fights this is displayed through their snares and knock-backs, archers have low defense and decent HP, their attack speed is the fastest in the game to help then kill as quickly as possible.

Archers who are phantom as advance class have a unique skill that makes them invisible for 30 seconds until they attack or take damage from any source, this skill also procs a passive next-3-hit-will-crit passive, but as for this skill, its very fun xD if your doing GRB (guild resource battle) u can grab a materia and use this skill, no-one on the map will see you or where you are so as long as you keep this skill up u can get from zone5-zone1 without being stopped xP. (doesn’t work on spectral so don’t even think about it lol xD). and the invisible skill also works well for item delivery, as u can use it to avoid the aggro from mobs and to reduce the speed debuff by a little thanks to your speed buff that you get from the stealth.

Marksman – Highest / fastest damage output advanced class in the game and as archer, marksman rally outdoes the other 2 advance classes by a lot early on in the game. I suggest starting with marksman and switching to whichever class u want at lvl 55. 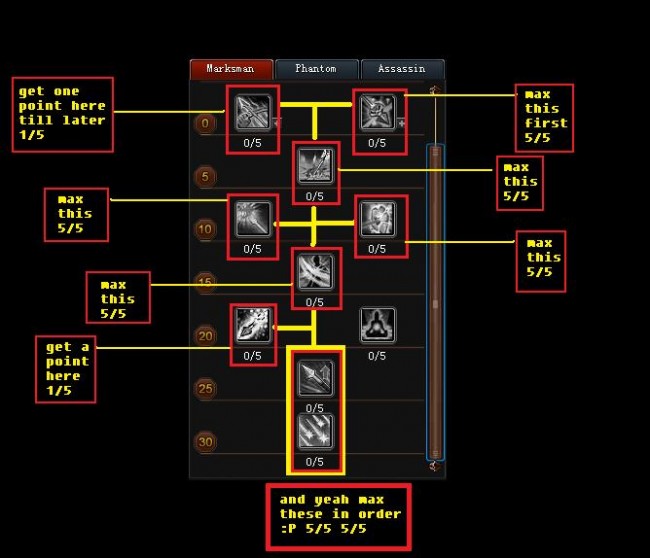 Phantom- well, these guys are supposed to be the swift killers, the ones who fade in, 3-5hit you then fades out and moves onto another prey, but, sadly, i see where they fall off at doing this early on in the game, i played archer phantom until about lvl 45 or 47 don’t remember, it was fun, but when i actually switched to marksman i see how weak i was compared xD so you should probably start with marksman until your about lvl 50 and your damage is starting to look interesting, then switch to whatever adv class you want, unless of course, u like blending into your surroundings, then just start phantom.

Assassin – the Dot class, in other words you probably really shouldn’t play this class until your lvl 50, i can see where dots are rather crappy early on…i really dont have much to say about this class other than that lol so i’ll stop here xD.

phew, finally, last but not least.

Paladin (its pink cuz i like pink and i’m an SB, u got a prob? come at me bro)

Paladins wew man, these guys are the bomb, basically this is the hybrid class, uses both magic and physical attack, adv classes are more specific on which you will need. these guys have AOE’s like mages that scale off your magic attack, some even have physical attack bonus’s to them, they have range skills that can make u like a mage or archer, and they have healing skills that make them like a cleric/tank. Paladins can be off-tanks/tanks/pure-DPS and thier pull skill, its Uber annoying xD .

ok just like barbarians these guys have a few routes

Uhm from what i see and have experienced, paladin’s only bonus when it comes to events is their heals that come form spirit blade, works good for both GB, GRB, and spectral, just not as helpful as other classes skills, like the way mages teleport, barb’s can run away, and archers can push back them-self, push back enemies, and snare. so yeah that’s basically it for them.

PyroBlade – Pyroblade (PB) is just pure burst damage and AOE’s they have a heal but hardly even good compared to that of SB’s, so if your really looking for great AOE damage as paladin this is your class.

SpiritBlade – Spiritblade (SB) is just great overall imo (in my opinion), they can tank/deal decent damage and heal allies, their the whole package xD just depends on where u drop your attribute points :P.

just max these in the order displayed 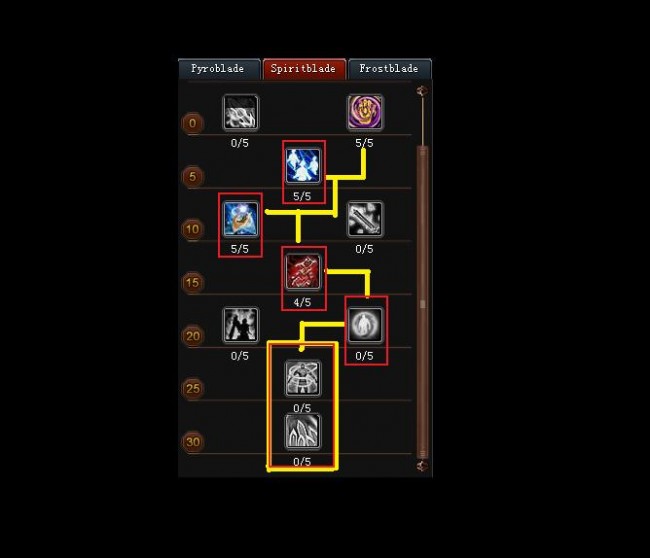 FrostBlade – And finally FrostBlade (FB) never played this class but from what i read about it, this class is a long ranged caster with slows and immobilize skills, their good at trolling you if u cant close gaps xD or have range :P.

(as for skill distribution this is gonna take a while since i need to get on a character for each class now and go through the distribution for each advance class, so please be patient, i put my daily quests and events on hold for this ><)

Note : Adv class guides will be added slowly :/ sorry I’m just a bit busy trying to stay in rankings and lvling up an all dat u-u”. ty for reading what i already have, hope it helps!! leave a comment lemme know your thoughts :P or don’t xD.

k adding the builds i can add atm, this is just MY build i don’t need YOU telling me its wrong, if u don’t like it then do your own, this is just how i do mine, your free to use it if u please