Fellow explorer of Arborea, you are now about to discover a very important aspect of TERA. Something which we won’t enjoy as there is a lot of Luck involved. That is, if we wish to get the best stats on our gear … the world of Gear Attributes and Upgrading. Now before some people get scared by the idea of RNG, it is not necessary to get the best stats or the highest level of enchanting to do really well in TERA (both in PvP and PvE). However if you wish to be the best, I suggest you read on and try to get the best stats on your gear.

During your travels in Arborea you will come across many items with a “?” over them. This means that the item can be identified and then upgraded. To identify the item you will need to buy an identification scroll at the general vendor (costs 5,000 gold).

Upgradable items always have base lower stats than non-upgradable items; however their potential is far greater. The reason is that the upgradable items can be identified to reveal specific attributes that will aid you in your numerous battles. In short, attributes are stats which activate when certain conditions are met, similarly to crystals. Once the item has been identified it can be strengthened via the enchanting system.

The sacrificial gear you must use depends on the tier of the item you wish to enchant. You can only enchant an item by using a sacrificial item of the same tier. The reason why it is called sacrificial item is that it will be destroyed in the process of enchanting your gear. The tier of an item varies depending on the level of the item.

Different types of enchantment powders can be used, each have their own effect but of course their price greatly varies. The three types are White powder, Pink powder and Blue powder.

This section will cover the various attributes that can be found on all equipments. Afterwards I will mention the class-specific attributes which you can get from two level 58 Dungeons (Dome and Watch). Finally I will finish the post by discussing which attributes are the most preferred for the various class roles.

This sectionmainly focuses on the PvE aspect, since for PvP there are less attributes to choose from. I will however add a PvP section if people request it.
When there are more than one line of attributes it means you can choose between different options depending on what you prefer.

The damage dealing classes have a very simple role, to unleash all the damage they can in the shortest amount of time. As such they focus on damage dealing and animation speed attributes. Furthermore, since they are often facing the monster’s rear, they can get an attribute to increase their damage for this specific situation. Here are their most commonly used attributes on the different equipments:

The Warrior has a different story than all the other classes. This is because it is the only class that can both Tank AND do a lot of damage. Depending on the situation, mainly whether the Warrior is tanking or going for damage dealing, the most crucial attribute is animation speed. Here are their most commonly used attributes on the different equipments:

Lancers rely on generating as much aggro as they can to make sure that their group can perform at their best without having to worry about monsters attacking them. Another very useful aspect to focus on is their animation speed, which helps them perform all their skills faster. Here are their most commonly used attributes on the different equipments:

Healers have to focus on making sure they can quickly and efficiently heal their group. As such they will aim to get healing and animation speed attributes. Here are their most commonly used attributes on the different equipments:

Identifying and unidentifying is a very simple process, however be aware that randomly generating attributes for your gear can get expensive, since it is random. It is suggested to only start doing so at level 50+.

In the post above I explained which attributes you may want to focus on getting depending on your class, make sure you have read it. Once you are satisfied with the attributes, or are just tired of trying to get the perfect stats, you will use the enchanting system.

As you can see, crafted gear does gain an extra attribute over PvE gear. This is why crafting gear can be a good alternative when leveling up. However at high level it is less viable for various reason (mainly it is very expensive to craft armour that compares to the good drops).

Before you attempt to Lux your gear you need to be aware of a very important fact, it costs a lot of money. It is recommended to only Lux the best gear (currently Level 58 Tier12 Rank1) with this method.

The best way to increase your chances while trying to be efficient with your spending money is to follow the flowchart below:

When leveling up, it is greatly recommended to enchant your gear to +4 in the low to mid levels, no higher as you will get replacement gear fast as you level up. Getting +4 is relatively easy to achieve, with an approximate success rate of 80% from +1 to +4. Past level 45 and above it is more efficient to get +6, as you gain an extra random attribute and you keep your gear for longer. Finally, at max level (58) it is important to get +9 up to +12 on your high-end gear. The obvious reason being that you will keep the gear for many months and the added bonuses will really add up to greatly aid you in your many battles.

I have made a chart to compare the Gear level range against the corresponding tier:

The high-end level 58 gear is Tier12 and has various rank that defines the quality. Tier12 Rank1 is the best gear and upgradable while Tier12 Rank6 gear is non-upgradable, but very useful as sacrificial items to upgrade Tier12 Rank3/Rank2/Rank1 gear. Please note that Tier12 gear cannot be traded, it is bound to whomever loots it.

Powders and their effects

As previously mentioned, there are three types of powders: White, Pink and Blue. Their effects are described below:

◘ White = Normal success rate, chance to downgrade if failure. Most commonly used powder type as it is very cheap and sold at every general merchant store.

◘ Pink = Higher success rate, chance to downgrade if failure. Least used powder type, it is relatively expensive and can still cause the gear to downgrade if the enchantment is a failure. This item is only sold in the luxury shop which can only be enabled by Vanarchs (Lords).

We all have a different way to play a probability based system such as enchanting. In TERA however my friends and I have found the following enchanting method to be the most efficient:

◘ +0 to +4 = Use Common and Uncommon gear as sacrificial items and White powders.

◘ +4 to +6 = Use Rare gear as sacrificial items and White powders. On Tier12 items, I personally use Pink Powders from +5 to +6 as Rare Tier12 gear is the most expensive Tier12 gear which can be traded.

◘ +6 to +12 = Use Legendary gear as sacrificial items and Blue powders.

As a side reward for enchanting your weapon to +7 and above you will notice a glow on your weapon. There are different hues, from a faint blue glow at +7 to a full bright neon pink at +12: 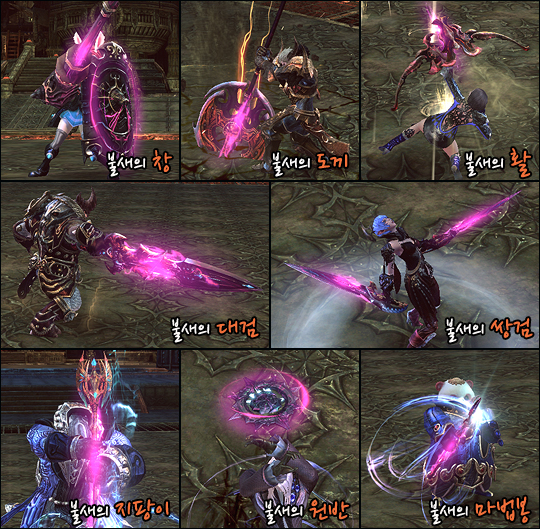