You’re mean, you’re crude and you’re outa luck. You can take hurtful comments and you like to keep people close to you.
Aka.
You’re meant to piss people off, you have a large health pool and you destroy pros within your Jet Gun’s range.
You are the Tank.

What does a Tank do?

As a Tank you’re job is to push lanes and kill pros who over-exert themselves in to your territory. You hit hard, you hit fast and you hit by surprise. You also have the ability to delay health regeneration on Pros by poking them with your Jet Gun for a quick second which can often bag you a few kills and assists.
You tear through bots, pros and turrets without much of a sweat and you’re fairly mobile. Use this to your advantage and keep the pressure on the enemy team and make sure none of them decide to push. This is YOUR lane and it goes by YOUR rules here.

At the start of a round put that Skill point in to Tank Charge or Offense or Defense or Product Grenade. We’re going to be focusing on those skills for this first part. If your healer is dealing out some shields then grab some of that, else just dash to the front lines quickly. Combine hovering to your highest point in the air with Tank Charge for maximum effect.

When you’re on the field you should be careful to not push too hard but keep the pressure on the enemy team. Fire away with the Rail Gun and JetGun + Death Blossom anyone who gets too close and chase them if they’re low on health. You’ll get a kill most of the time. When the first wave of bots come you can clear the Slims instantly with a single Death Blossom and then dispose of the Shady bot.

If the enemy team just isn’t pushing at all and dying very easily then just push forward to a turret and try and hurt it/destroy it while still being careful.

You can also tag a few bots in the other lane using the Rail Gun, take advantage of its piercing shots.

Keep on this combination of killing bots and holding you’re ground while killing pros who underestimate you until the first Annihilator.

Before I go on here’s a few more things you can do.
If your Jungler is having problems in the Jungle or doesn’t exist then you can utilize the hover ability that comes with most Enforcers to climb up to the Jungle.
On Loco Moco you can hop on Spunky Juice Vendors and then fly up to the top of a Jump Pad.
On Gun Mountain there’s a small ledge you can climb up. It’s located to the left of your spawn in a dead end with a jump pad that lets you get up the wall. You can fly up there and then proceed to fly in to the Jungle.

Once you’re in the Jungle you can try and steal some Gremlin kills and generally piss off the other Jungler(s) to assert dominance over them.

When actually going for the Annihilator your job should be defending whoever is buying it. You soak up damage and your Tank Charge and knock people back who are looking to interrupt the person buying. If no-one’s around then just feel free to buy it.

“Burn them! Burn the none believers!”

If you didn’t get the Annihilator then just hold the line to the best of your ability. Just because you don’t have bots it doesn’t mean you can’t kill what’s being pushed in to your base.

If you did get it then start pushing towards their base. To kill turrets let them take aim at a group of bots, have at least 2 Shady bots in their to prolong the Turret’s fire for a while. While that happens then you can just focus fire down the turret with your Jet Gun and if it goes undisturbed you’ll get the Turret killed in no time at all. Chucking in a product grenade can also help immensely as it stuns the turret.

Continue pushing forward while still not pushing too hard that you get yourself killed. With a good team backing you up and you backing up a good team you’ll be pushing well in to their base.

Use the Jungle to move around and ambush people.

If you find yourself behind an enemy who hasn’t noticed you then just casually hang back and burn them to death with the end of your Jet Gun. You’ll be surprised at the amount of people who don’t know their ass is on fire. If they do notice you then Death Blossom and Tank Charge in to them to deal some heavy damage. Either you can run away or finish them off.

When the second annihilator comes on your job remains the same, protect your team mate who’s trying to buy it or if no-one’s there then buy it yourself. 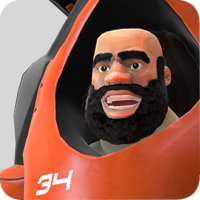 The Tank after getting to level 15.

If your team didn’t get the Annihilator than just try and hold the line to the best of your ability and then push whenever you get the chance.

If you did get the Annihilator then you should have destroyed 3 of their turrets at the least, borderline killing the 4th. Get your bots to those Rock-it Turrets and bring them down. If that’s too much of a problem then you will probably have enough money for a Jackbot if you haven’t been buying much. Spawn it and either push with it or use it as a distraction for you and some bots to focus fire down a turret.

Continue asserting dominance in the Jungle with your team so the enemy team can’t get behind you using the Jungle.

Push, push, push and soon you’ll find yourself face first in their money ball. Either attack it or deal with enemy pros who are desperately trying to stop you from attacking it.

Of course this is what I normally go. You don’t have to follow it exactly.

– Use the Death Blossom as much as possible. It’s an instant high damage, AOE button that can stop grapples.

– See that Assassin who’s constantly trying to be the world’s best MVP? You’re more dangerous to her than she is to you. Unless she has gone unopposed in the Jungle the entire match and heavily out-levels you or has been fed.

– Let people underestimate you. Pretend you’re retreating or running back to base for health but instead hide around the corner and get them by surprise. Tank Charge them, Death Blossom, Grapple, W+M1 them. You’d be surprised at how far someone will go to get a kill.

– Practice to aim with the Product Grenade. It shoots fast and bounces all over the place. I find aiming at people’s feet helps.

– If you ever find yourself in the awkward position of having to actually kill a turret or even a small group of bots (god forbid) then a good way to deal some heavy damage is to initiate with a Product Grenade. It’ll stun them and damage them. This goes particularly for high health bots.

How to fight other Pros
Normally Tank is just ambush enemy pros to get them in your Jet Gun’s short range and W+M1 them to death. There’s a few things you should still look out for.

Assault
The Assault is faster than you, can fly longer than you and has a dash similar to you. Your best bet would be to stun them with the Product Grenade and Jet Gun them to death with a combination of Death Blossom. Remember when an Assault is flying low you can Tank Charge in to them and send them flying far, far away. This is a good way to force them out of the ring.

Gunner
A Gunner will decimate you if you approach him head on, so as usual you should find a way around him and ambush him while dealing out as much damage as possible. Look out for his slam as it’ll knock you out your effective range and in to his all while stunning you.
The Product Grenade is a great way to stop him from effectively tracking you with his mini gun.

Tank
When it comes to another Tank it all comes down to who’s a higher level, who has all their skills ready, who has better team support, who has more health, who has higher leveled skill X rather than Y and most importantly who can keep their crosshair on the other Tank the longest.
Ambushing and W+M1 works fine too.

Support
W+M1+E+M2 when he’s away from his firebase. Product Grenade his firebase and deal with that, then proceed to W+M1+E+M2 him. Although do look out for his Air Strike.

Sniper
Obviously stay out of the range of the Sniper and try to avoid places where there’s an obvious trap. If he has a good aim a single Headshot slow can spell disaster. If it comes to this hover up to your max height and Tank Charge to safety. Alternatively try hitting him with the Product Grenade.
When he’s in your range just W+M1+E+M2 (I’m just gonna call this the Pro MLG Tank Combo from now on.)

Assassin
Just be aware of her when you’re on low health and all will be fine. If she attacks you at full health then enjoy a free kill. Use Pro MLG Tank Combo and use the Railgun if she’s getting away.

Veteran
A Veteran can be troublesome considering he can disable you when you’re in your most effective range, as well as the fact that you’re the big Tank you’ll be an easy shot for his Ka Claw.
Deal with this guy carefully and preferably with a team backing you up.

Combat Girl
Pro MLG Tank Combo her when she’s in your range and unguarded. If not use your AOE attacks and attacking from behind the corner to pick off her Combat Kitties. If she’s stupid she’ll clump them up and a single Product Grenade will tear them apart.
Also watch out for that laser.

Gunslinger
Pro MLG Tank Combo her when she’s in your effective range because she’ll be far out of hers. Use Tank charge if she stuns you to either get away or to keep up. Also watch out for Gun Flurry, it can hurt you a lot.

Karl
Karls can either be easy to fight or hard to fight. If they’re hard then you need to watch out for their stun, the prop hop, Juniors. Stun will leave you open for him to unload everything, prop hop will knock you out of your effective range and Juniors just do cheap, quick damage.
If they’re easy then Pro MLG Tank Combo.

Cheston
Be wary of Cheston. He can get away from you rather quickly or knock you out of your effective range with rampage. His high health makes him harder to kill so either ambush him while he’s in a bad position, you out level him or if he’s not smart.

Captain Spark
Captain Sparks can be dangerous with their Flip Switch. Your a big slow target and he’s a fast little guy. If you know he’s hunting to ring someone out don’t risk it. He’s an expert at escaping too so if you’re going to ambush him unload your fast damage skill then grapple him. Hopefully you’ll have done enough damage to make him burn to death if he tries to run away.

Wascot
Wascot specializes in denying the ability to grapple and making him harder to kill with party pooper. Is that a problem for you? It shouldn’t be. Pro MLG Tank Combo him if he comes after you.
Although watch out for that Crook Hook, it can be very dangerous if it hits you.