The original Map that is widley used today, was partially based on the POS cordiante system, with that we were able to get a “Pixel Perfect” map of the area that was available to us at the time. However Starvault soon encrypted the positioning system, and it could no longer be used for things like mapping. While the efforts continued to map the entire continent it was obvious that the new areas suffered from heavy distortion, and mapping any new areas would be extremely difficult.

However when Starvault posted their article on their weather system, they essentially handed over scaffolding for building a new and accurate map. By placing the weather map over the old POS made map, and using “Sausage Lake” as the guide, the weather map fell perfectly over known POS landmarks, forming the base to correct the distortions in the new areas.

The weather map shown in comparison to the new map: 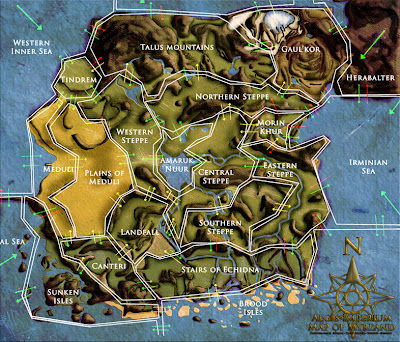 The weather map had to be essentially “Reverse Engineered”, and it had to be understood why the map cut off into a different region where it did. As an example, “Sausage Lake” includes the two smaller lakes in the North, and it makes sense, since bodies of water act as generators for weather, and it is logical to assume that they should be grouped together. At the same time Mountains act as natural walls for each region, and by looking at the influence arrows, you could guess the elevation difference and mountain height.

This map includes only the major cities, and we are also releasing an un-marked “Clean” map. The reason why we did this, is that we want the maps to act as a base for the community to build on, as even the Forest locations were omitted. So it will be up to the community as a whole to properly flesh the maps out with priest and spawn locations, with their own solutions; whether it be google maps, or anything else. Hopefully this will make navigation in Nave easier for all players.