Just to introduce myself: My IGN is StarGarnett, a level 45 PF. I’ve played a lot, and it never gets bored. Like any other positions, you need to be smart and pass the ball when your teammate is open. So here are a couple of pictures of my character: 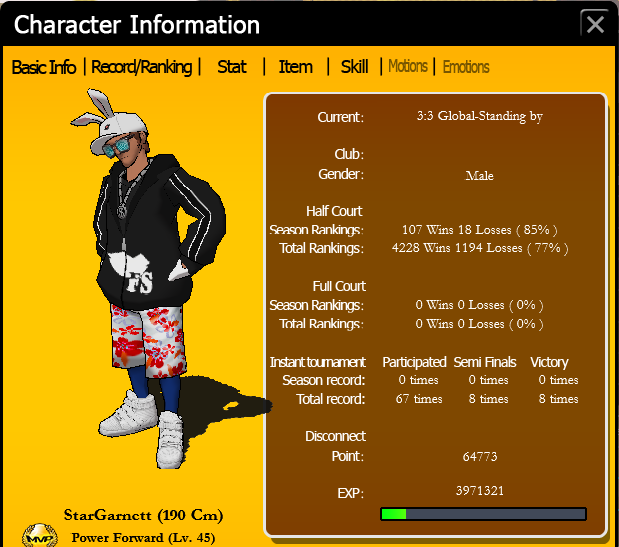 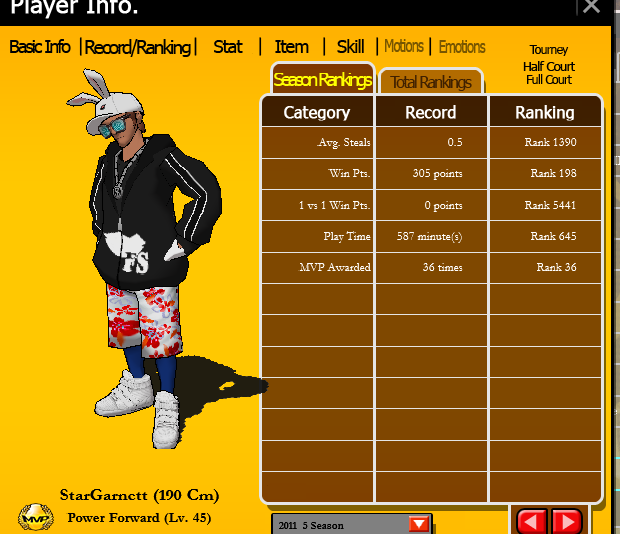 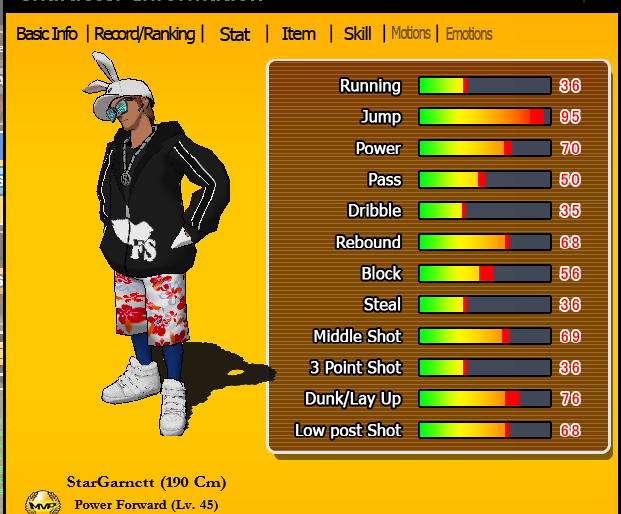 To start off, I just wanna talk about what do you do and what do you not do. Well, the advantage of a PF statisticly is obviously the jumping ability. To fully use the advantage, you need to try your best to DUNK THE BASKETBALL. Not shooting middles, doing dream shakes, lay-ups & so on. The reason why you don’t do those things often is because either they are really easy to miss or they can be caught by a C. If a ball is caught, there are no chances for diving, so you just lose a shot opportunity, and your opponent gain an opportunity. Some people might say “well, I tried to press F, but why do I frog.” Um, you just have to watch out if there is someone in front. If there is someone, don’t press F (this needs time to figure out when to dunk and when not to).

Skills to have.
Personally, I have 3 slots (including the original one) so that gives me 15 skills. You have to put through pass, face up, box out, chip out, Freewill Dunk, Hook shot, Dream shake, Double fake power dribble, and something I can’t think of right now.

For freestyle skills, you should definitely have Honey Dip, Flip Dunk for close-range dunks, and Kiss the rim, 360 Leg through, Trap Card and Air Walk for long-range dunks. Other things to have could be Iron will, middle shot FS.

Dunk Cycles.
Remembering yourself’s dunk cycle is as important as opponent’s. For close range, you have (normal-honey-filp) cycle and for range dunks you have (normal-trap*n-kiss-360-air). Only normals are the easiest to block, others are pretty hard compare to that, and for honey it’s just guessing. So if your opponent PF has a honey, do not be surprised and get ready to block.

Rebounding.
I’m not gonna talk about rebounding here since I’m not that good, but all I want to say is in 3on3, you and C should not jump at the same time. In other words, one of you should be waiting for the chip while one tries to get the bounce. Or one chips the ball and one waits. Personally, I wait for the chip since my connection is not that awesome( 30 ping, 14 download, 0.8 upload), but lots of PFs are jumping 1st (chico).

Scoring/Plays
As I’ve mentioned at the beginning, you need to try your best to press F and not turning the ball over, and that is very hard to achieve without a pillar. The reason for that is most of the time, PF faces at least C when he tries to dunk, and sometimes someone in front of you faces you up also makes you shoot from a bad angle. If you see the opponent C is NOT behind your C; in other words, the rim, he and you are in a line (sometimes C stands on the side for a side block), try to pass to your C because he’s most likely to be open. When you pass the ball to your C, the opponent C has to get back to block your C, and now its the key: Your C can choose whether to shoot or pass back, so what you shold do is getting yourself in a good position and ready to dunk when you get ball. The reason behind that is the opponent C is in the paint, so if you do a far dunk from a good angle, it’s really hard to block.

So basically when the game starts, you should try to clear your G’s normal dribble since it is very dangerous to use since you can get a turnover on it. So you just stand in front of your G, and letting G dribble to your body. Then, you back down and try to break the opponent G using a power dribble, while your G is running around the 3pt line where your C is setting a screen. This is the play that I love to use, and it is really efficient since you break someone right at the beginning of the posession, and you get a 3 on 2 opportunity, which must convert to a score by passing the ball around.
so, you should set screens ( from 3pt line) for your G, and when the double team comes for your G, you just go inside a bit (to somewhere near the free throw line) and tries to dunk or pass. Never force a dunk. Although it’s not that hard to block, for good Cs it is. So if you really wanna force, just watch your G’s movement. So when he comes close to you enough to dive the ball, you can try to force it.

Why pillar?
A lot of you have said pillars suck because you don’t have any skills. Well, I would say if you wanna shoot middles/2step you make a SF, and if you do lay-ups or dream shakes(definitely not to since it’s so easy to turnover) you make a C. A pillar just increases shot percentage, and I doubt it is that easy to score over a pillar without any practice. A pillar, is to dunk over your C while your C has blocked the opponent C’s best block position. So for example, when your C makes the opponent C standing under the rim, your dunk from free throw line is impossible to block. Or when you dunk from the right, your C pushes the opponent C to the left, so that he can’t come over for the block. You gotta watch out for the defender in front of you, and the opponent C and your C’s position, and even your G’s position. If anyone stands close, you will frog.

And for inside dunks, what we usually do is A+S. A basically sucks the defender in, and during the A, a PF can goes into C’s body (literally), and the sight will be blocked a little. By using that screen, you can do your moves, and score easier than just play 1-on-1 with a C. And most of the times, don’t play 1on1 with a C!

Defense.
Defense is usually the key to success. The main thing is just getting shot opportunities, and you can achieve that by getting a rebound, a steal, or a dive. Everytime you get the ball, it basically means you have one more shot when your opponent has one less shot. From a PF’s point of view, you are like the “all-around” defender on your team, since you have either rebound or block. When you are trying to guard a guard, you can choose not to get too close, since you have a relative high block range. I don’t know how to defend a SF, since I always get owned by them. For PFs, you have just try to stay in front, and try not to be broken by power dribbles. Also, when you are playing against PF teams, you should try to move back and forth, and watch out for moving screen. If you think the opponent is going to set a moving screen, chase them down to the 3pt line and try not to block the shot if it is obvious that it’s not gonna be blocked (someone has told me that a no-block shot is more likely to go in than a non-contested shot). In addition, when the opponent PF is inside the paint, try not to stuck in there and block the shot, because your C is there for the block. What you should do is try to get the rebound and ready for help defense. That is, if your C jumps for the fake, you have to be ready to jump since C is the biggest threat to a PF.

Stats.
Personally, I think a good PF needs to have at least 14 points, 2+ assists(more points then less assists), 3+rebounds, 1.5+blocks, and 0.7+steals while shooting 65+ from the field. Among those stats, the most important ones are rebounding and points/assists. If the game records turnover rate, then it should be low too.

Overall, a PF’s success is a team’s success, since PF is not like a SF/SG who usually does one-on-one plays. You need good pillars from your C, and timely passes/dives from your G, and sometimes dagger 3s to win. Good Luck!

Even me think this is boring. I might forgot a lot of things, so if you have any questions, just personal message me (StarGarnett), and I would love to answer those.

Favourite Americans to play with.
Vomit  – great rebounder/passer/blocker. He gets so much more rebounds than Chinese Cs, which is really impressive.

Anchor – plays smart even though we haven’t played before. Good passer, diver and rebounder!! Someone who has incredible 1on1 defense and 1on1 offense. Makes me think about Vivi.


If you find trouble scoring/rebounding/blocking, just play some 2on2. People say 2on2 is for noobs, well I don’t agree. It practices your skills without lots of teamwork. Personally I’ve played like 3/5 of my games in 2on2.
Cheers,
StarGarnett