Ok so after running this twice now and having a really tough time with the boss, I thought I’d make a short guide.

First, the basic pulls.
The beginning pulls are single target so it’s not a problem, but when you reach the circular spots you’ll find groups of 3.
The groups are usually 1 guy and 2 other guys with him.
How I pull is I shoot one of the 2, and have my team focus that one first, then the 1 guy, then the last of the pair.
Other than that, the pulls are pretty simple.
Stay out of red circles and you should be okay.

In the 2nd to last circular spot, there’s a mid-boss.
He’s pretty easy, I’ve tank and spanked him both times, even killed him the first time with only 3 people.
Second time with 5 people was much easier.

The last boss is pretty ridiculous, and we haven’t even gotten close to killing him yet due to a few things.
First, he does a big AoE explosion every…. 20 seconds or so?
I’ll have to check my timing on that.
You’ll see the big red circle, make sure everyone gets out and you’ll be fine.
It 1-shots my CTU.
After the explosion he does a heal and you’ll see a purple ring around his body.
During this transition, YOU HAVE TO INTERRUPT.
He heals for pretty much all the damage you’ll do to him.
The party of 5 I had only had 1 guy with an interrupt so we failed pretty hardcore.
The 2 Artillery on our team didn’t even get their interrupt skill and didn’t have points so we had to quit.

Here’s my strategy for that fight as a tank: 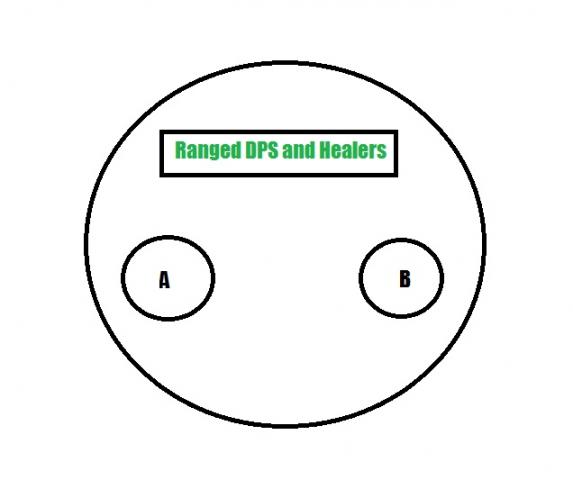 Ok, so you’re in a circular room.
I had my 2 Artillery and Healer stand on one side as me and the other melee fought him at A.
Once he does the big red circle for his explosion, I ran over to B.
After the explosion he starts to run over to me, but halfway he will stop to try and heal, you’ll see the purple ring.
While he’s running to me, it gives me time to get heals and stuff.
Then, tank at B, big red circle, run to A, explosion, stops halfway to heal.
Keep going back and forth.
Once you get the timing down, you can even start running to the other spot before his explosion and as he turns around to chase he’ll start his explosion.
This will give you more time for heals.

If anyone has any feedback or information to add, I would like that a lot.

IF you do not have a lvl 28 TANK, i dont just mean scientist but one that has Anger skills trained and 2k hp its tricky
This instance is designed for a FULL (6) team at level 25. It is do-able, but hard with all 25’s.

Standard mobs are lvl 25-28 and twice as big as any level 28 mob you see on the island. Which means they have more HP, more damage etc.

There are circular areas where there are 3 mobs together, this is where you have to shoot 1, pull all 3 out and just deal with them. cause usually there are 3 groups with 3 mobs (total of 9 if you are counting) that if you run right into the middle you just committed suicide.

the first boss SMOOTH CARL is entertaining. Watch for red circles on the ground… that means hes going to AOE there. His AOE is fire. Healers can not remove fire so if you are in the fire get of it. The fire burns anywhere from 15-25 seconds where he dropped it at. The fire also burns up to 10 secs on you after you leave the flames. Remember the key here is to keep out of the fire.

Past that you get more mobs to kill, and then you will find 3 riply guards in front of Riply standing in the center of a circular room. IF the team stands far enough back, you can shoot (pull) 1 guard out at a time (the other 2 might come out but will reset if no one fights them and everyone is back far enough) and kill them off.

Riply is the last boss. He is a real pain. But, if you play smart you can do it. Riply has a nasty AOE that kills you. There is no chance of maybe you have enough hit points, or you have awesome evades…. nope you are just dead. So when he stops and you see a RED CIRCLE on the ground RUN! But not out of the circle room, cause if you pull Riply too far out he will reset and back to 100% shields and health. Riply also has a heal… Interrupt it if you can.

When you are done you will get some regular loot item and 1 random loot. During your adventure you will have also gotten some other kool thing to make your DA armor.