I’m not sure if this is all of them but these are the ones that I have knowledge of.
Haven’t seen a place to get all the locations or anything so here we go. 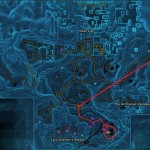 Strategy: Subject Alpha is in the Brill Sediment of Taris in the middle of a lake located X: -455 Y: 791. The boss must remain in this lake at all times else the fight will reset. You will need two tanks for this encounter, at random intervals Subject Alpha will toss the tank into the air and his agro table will be reset. At this point the off tank needs to taunt the boss. When the off tank is thrown in the air, the main tank should pick up the boss and the process continues in this manner. The melee dps should stay behind the boss and range on the outskirts of the melee. The raid must stay spread out as much as possible as Subject Alpha drops a gas cloud AoE on a random raid member. If the could is on the melee they can either move to avoid the cloud or the tank can kite the boss out of the cloud. 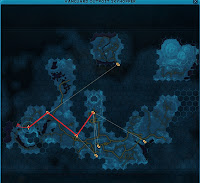 BOSS: Trapjaw
LEVEL: 30
LOCATION: Tatooine
CORDS: -1700,410 (Click the mysterious skull in the centre of the dead jawa to summon him)
MAP: Strategy: Summoned from the skull located (-1772, 410). Tank and spank with the following exception: every 5-15 seconds he’ll target a random raid member and hit them for 2600-3600 damage, stunning them for 2 seconds. This ability affects everyone within 10m of the targeted player. Spread out as much and possible, and assign healers to top off whoever gets hit.

Strategy: Located in a bonus area on Nar Shadaa (2040, -1570) is a dps race once the boss has hit 50%. There are two abilities to be aware of, one is Incendiary Cannon that will fire missiles at a random raid member every 20 seconds. The missle will leave a fire dot and a healing debuff on the target. Healers must be aware of this mechanic. The second abilities is Repeater Cannon that is channeled for about four seconds and will need to be interrupted. However, at 50% this ability can no longer be interrupted, instead the boss must be burned down as quickly as possible before the healers are overwhelmed.

BOSS: Ulgo Siegebreaker
LEVEL: 35
LOCATION: Alderaan
CORDS: 300,-200 (Wandering up and down the river by the republic base)
MAP: Strategy: Found south of the Wardpost Hurne in Glarus Valley sitting near the river bisecting the map on Alderaan (X: 301, Y: -238). Ulgo is a heavy AoE boss where melee heavy raid groups will find difficult. Position the tank such that Ulgo faces away from the raid, the melee on its back side and the range spread out a bit away from the melee. Raid members should have about 5 m free space around them.

There are three abilities to withstand. The first is Plasma Pulse a pair of concentrated lasers and will target the second highest on the agro list, it can either be interrupted or soaked by an offtank. The second ability is Fusion missile which does AoE damage in 35 m, it should be interrupted and the abilities looks like the boss is discharging energy. The third mechanic are bombs tossed out from the middle of the raid which appear after three beams from the sky converge on a random raid member. A red reticule will appear and the bombardment will remain active on that area for 30 seconds.

Strategy: Located about 300, -200 Wandering around in a caged off area. The Rogue Cartel Warbot has three main abilities, the first of which is his basic attack making the fight a tank and spank while the raid avoid AoE damage. The AoE damages comes from his experimental explosives which is a stick grenade thrown at a random player doing moderate damage, the other is summoned lightning from the sky striking an area. Move the boss out of the area. After the lightning he starts to attack the second on the agro list and becomes untauntable therefore two tanks are needed in this encounter. The boss does have an enrage timer.

Strategy: The Ancient One is an over-sized lvl38 heroic world boss worm that is dead set on killing anyone who is courageous enough to battle it. It is located in The Sinking City area of Taris (most northern map) and is pop spawned by clicking on the dead Jedi, which is located approximately around [-800, -656].
Due to its level it’s advised that you take a tank that’s no lower than 36, to reduce the amount of damage taken – this isn’t the case for the off-tank, which may be lower if needed. Aside from that, as long as the average level for your team as a whole, is around 35 you will have no problems dealing with this monster.
The fight is primarily tank and spank but it does have two things to look out for:
• Pools of slime spew from under the boss, tanks should move the boss out of it and melee should make sure not to stand in it too long
• Adds will spawn periodically throughout the fight and should be picked up by the off-tank – dps (especially ranged) should focus on these to kill them quickly.
Easy mechanics but a thrilling fight because, well, it’s a gigantic worm.

Strategy: Located around 400, 1100 walking around the road in a heroic area of Glacial Fissure you will find Snowblind. The area will need to be cleared of mobs. Snowblind unlike most world bosses does have a cleave therefore only the tank and offtank should be in front. Periodically, Snowblind will stealth and cause a blizzard that targets the entire area and cannot be avoided, just have the group stack up so they can take advantage of AoE heals. Designate a meeting point for your group before you start the encounter. Snowblind does have an enrage timer so bring a full group.

Strategy: One of the hardest world bosses taking a large raid force and dealing a lot of AoE you can find Gargath on Hoth around -2200, 500 walking around the heroic area called Gargath’s Watch. Gargath has one ability that occurs frequently and causes a lot of damage, the ability is an earthquake that remains on the ground. The earthquake is followed by a red marker that appears on the ground. It is important for the raid to not stand in the earthquake and for the MT to kite the boss out of the earthquakes. A dedicated healer is required on the MT.

Strategy: Located -450, -3450 in the middle of the lake, Primal Destroyer is a level 50 world boss has a 2 hour respawn timer and is know to drop the schematic for crafting the magenta colored crystal.

Two tanks are needed for the encounter. The OT will pick up all three adds and tank them away from the Primal Destroyer. One add will regenerate health, the second will reduce the healing of the raid, and the third will produce AoE damage. This fight is a DPS race so focus on the boss first, then kill the adds later. Have a dedicated healer to the OT and one for the MT.