Rose Online Getting to Orlo Guide

Rose Online Getting to Orlo Guide by KingArthur

BEFORE YOU START:
1) Make sure you’ve done the Fates Quest and have chosen either Arua or Hebarn as your Fate. You will not be able to pass Part 6 of the Quest until you do.
2) Be level 180 or higher.
3) Being in a party helps for Part 8, but isn’t necessary.
4) Check after every step of the way to make sure you completed that step before moving on… 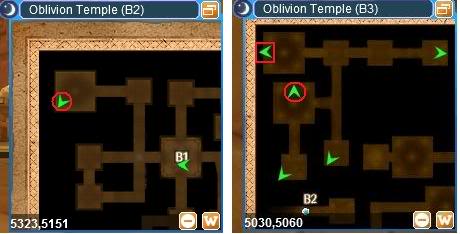 Thanks Xyler for the screenies <3

The Royals of Oblivion(2): Go to B2. Take the West (left) tunnel and then the first fork north. A tombstone thing is in the top lefthand corner. In the first screen shot above, the green arrow that has a circle around it is where the teleporter is located. Talk to it, chose option 2 and then spam through 1. It will take you to B3.

The Royals of Oblivion(3): Go down from where you spawn. there is a coffin in the middle of the bottom wall. Talk to it, choosing option 2, spamming through 1. one item shows in quest log. (All green arrows in b3, not boxed or circled, are the locations of the tombs. Do them in order, from left to right [or counter clockwise] on the map for next three parts of the quest.)

The Royals of Oblivion (4): Go up again, around, take the right tunnel, go down. Coffin in the middle. Second option again. Should have two items in quest log now. (This is the middle green arrow on the b3 map)

The Royals of Oblivion(5): go all the way north, all the way to the right. coffin on far right wall. talk to it. choose option to open coffin and take something from inside it. Three items in quest log now. (this is the far right/east green arrow)

The Royals of Oblivion(6): Now run alllll the way to the left furtherest room and talk to the left wall. (This is the green arrow with the box on it on the map.)

Now find your way back to b2 by heading towards the arrow with the circle around it and exit through the north wall behind the statue that looks like anubis.

make your way to b1. find the picture of hiria on the wall near Bond and talk to her…not the girl power/What a woman option. second option. and talk till she lets you in royal party (im hebarn, so i dont know if all that talk changes with arua)

The Royals of Oblivion(7): Run back to b3 (circled arrow) and walk up to the top left most room again (boxed green arrow) and now run through the wall. it teleports you to a new place. once here, take the right path and go up and all the way around till you see the portal. choose option one to go back to b1 and talk to bond. She will give you the Sustaining Orlean Portal quest.

Sustaining The portal(1):Gives you quest. Talk to Bond again for her to tell you what materials you need.

Sustaining The portal(2):collect materials from mammies and mummies in b2 of the O. temple. Mammies will give the scarves, mummies give ancient wrappings and bones, mystic mammies give the gold armor, soldier and ranger mammies give the other stuffs.

Sustaining The portal(3): Get first hit on two mammy king/queens and defeat the monster for proofs. You do not have the be the one who kills it.

The Royals of Oblivion (8): Talk to bond to turn in the sustaining quest.

The Royals of Oblivion (9):

Talk to bond again. She will tell you to feed the three canopics to the wall in b3. head back to the portal in b2 to take you to b3. Walk through the wall (green boxed arrow) using the second option. Head around to the Orlean portal once you’ve been teleported and feed the portal the three canopics and it will then give you an option to get to Orlo

To leave Orlo, and go back to Junon, head through the portal in the temple there.

To get back to Orlo from Junon, talk to Bond in b1 of the oblivion temple and she will teleport you to the portal room.

It was brought to my attention today that the guide has helped people to get to Orlo, but it’s hard to figure out the way back to Junon afterwards – which is quite true.
So here you go, the perfect sequel to Getting to Orlo: How to Leave Orlo!

1) Head East past the Wreak of the Blinding Mist map towards Orlean Portal Temple map (as far east as you can go on the collective maps)
2) Run up the winding road thing and Enter the temple through the door/wall thing near NPC [Interaplanetary Guide] Nova
3) Walk up the steps and enter through the Portal (it’s the same one you used to get to Orlo)
4) The portal transports you back to the Oblivion Temple (B3) map. (Check corner map to make sure it did)
5) Walk up the stairs and through the portal again. A list of 7 options will pop up. Select Option 2: Take me to B1!
6) Now you are in b1 of the OT. From here you can scroll to anywhere on Junon or run to the nearest city, Canyon City of Zant.

To get back to Orlo later on:

1) Return to the Oblivion Temple and talk to Bond
2) Select the option to transport you to the Orlean Portal
3) Run up to the portal and select option 1: Take me to Orlo!