Crazycomet here. I decided to write this in my spare time, since I had nothing else to do.

=============Why be a Pirate?=============
There are certain advantages and disadvantages of being a pirate. You get nice abilities such as Disposal of Stolen Goods, which allows you to turn goods dropped by merchants into cold hard cash, without sailing back to port (more on this later..)

Unfortunately, there are downsides. Not only will patrol ships such as Arbitual Cruisers and Glory Frigates attack you, you will be attacked by NPC Guards. Yes, those big scary guys in Athen’s port. And if they catch you, you go to jail for real time.

But if you can swallow past the downside, there is a rich bounty awaiting you. Personally, I reccomend you wait till your Sea Battle is lvl 32+ so you can handle Patrol ships. You may choose to wait longer, because it is hard to lvl up after you become a pirate.

Before you think about becoming a Crete Pirate, let me presuade you to reconsider. In the Caribbean, there are big, fat merchants and no patrol ships. NO PATROL SHIPS? HOLY !#$%!

Since new players automatically start off with a World Map theres really no need to show a picture, just Autotrack to Tortue City. Assuming your using a Dragonhead Gunboat, you wont need more than 4000 provisions if your carrying 110 sailors. Watch out for Wreckage drifters along the way; you can find Map Pieces inside.

Go to Tortue Dock (theres no Offshore). You’ll be placed among NPCs and aggressive pirates that will attack you if you don’t pay them 20k. Be warned.

Joining the pirates is like joining any other nation; the NPC leader is Pirate Castellan Levassor. Find him (look at map at the bottom of this post) and ask to apply for a noble title. Tuh-Dah! You are now a Caribbean Pirate. But theres alotmore to do.

Unlike regular nations, you cannot buy up your amity with Pirates. The only way to raise your amity is to sink the Armed Merchants found outside Tortue City. The ship levels are as follows:

You can get amity much faster from these ships by sinking them rather than boarding them. I suggest you use Canister shots on them because they have tough hull armor.

When you join a Pirate nation you receive two new abilities.

Extortion is rather useless, it allows you to bribe players for a few hundred coins

Disposal of Stolen Goods, on the other hand, is very useful.

First, put the Disposal of Stolen Goods shortcut button on your shortcut bar (hit Commands)
Second, make sure auto-loot is off, and sail up to the wreckage of a sunken merchant
Leftclick the shortcut button for DoSG as mentioned above, This turns your cursor into a little grab hand
Now (leftclick) on the goods dropped by the merchant. The goods will disapear, and you’ll be paid cash!
Make sure you dont click the goods onto your ship! This will only work if you click on the wreckage.

You can lvl your melon-cutting (disposal of stolen goods) up- each lvl DOUBLES your pay.
To do this, do the pirate quests mentioned BELOW:

There are quests you can do to lvl your melon-cutting up. Each lvl of meloncutting doubles your pay.

First, go to the Arms Peddler guy (see map at bottom) and accept the task, Pirate Sabre.
The quest asks you to go get two Trade Vouchers- captains of the Armed Merchants drop these.

Go board some Armed Merchants, and have patience. Sooner or later you’ll pick up some Trade Vouchers.

Go back to the Arm Peddler guy once you have the vouchers and finish the task. The sabre he gives you is utterly useless, so you wide as well just sell it. It may pay for your boarding expensises,

Now with that quest done, you have to go to the Tailor (see map below) and do the quest “

irate Sailor Dress”. This quest requires you to find five trade vouchers this time. Do the same as in the previous quest, just get 5 vouchers instead of 2. Once that is done, your ready to get melon-cutting lvl 2.

Once you’ve submitted that quest, talk to the NPC guy near the NPC leader. He’ll give you the quest for Extortion 2 and melon-cutting 2:

Getting lvl 3 melon-cutting is much easier; you can buy the Melon-Cutting Lvl 3 Scroll for a few million coins. Trust me, its worth the initial investment.

1. Using canister shots will sink armed merchants faster, because they have thick hull armor.
2. Dont bother killing off sailors if your going to board; time is precious
3. Just buy a few medit kits if your going off to board.
4. Your goal should be to port as least as possible; time is money.
5. Dont broadside with the bigger merchants; get in front or behind them. 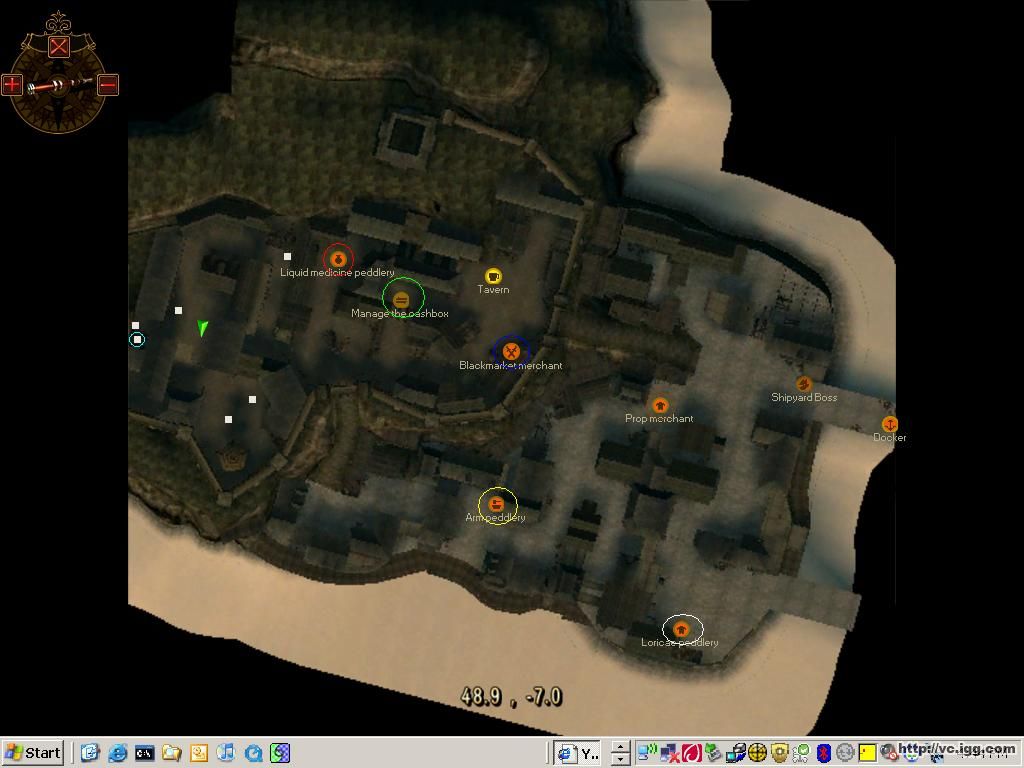