How to play at the Casino Royale:
An in depth study of Global warfare’s “most useless” building!

I’ve never seen anybody mention how useful the casino is before, but in fact it’s a great way to acquire gold quickly, and get the edge over everyone else! Money is a very useful resource, as scouting people and high level research options can take hundreds of thousands, if not millions of gold! Capitalists take note!

Firstly, and most importantly, for every level you upgrade your casino it increases your base morale by 1%. That might not sound like much, but in fact at a higher level population this can increase your idle population by hundreds, if not thousands, which is great for churning out troops and increasing your hourly gold income! It also increases the effectiveness of your events as well! A higher level means more gold per hour as well as per poker tournament! It’s also a building that requires very little upgrading time, so can be left to upgrade whilst you busy yourself with something for an hour or two between high levels!

2. HOURLY POKER TOURNAMENTS!
Your population all have gambling problems, they just don’t know it yet!

Secondly, the events accessible in the casino are rarely ever used, but they are actually incredibly useful and this can be done with a few clicks of a button! My next great tip involves Poker, population and morale! So, before you start this you may want to re-adjust your tax rate, which can be located at your Headquarters overview panel. Personally, I have my tax rate at (20 + Casino level) % when I’m not gearing up for a poker tournament. So:-

Step 1: Re-adjust the base tax rate! As I mentioned before, the magic number depends on the level of your Casino, as your casino affects your populations Morale. The magic number is 20 + “Casino level”, so for example a level 7 Casino, you’ll want a 27% Tax rate and a stable population, found by hovering your mouse over the population icon on the lower half of your screen (as pictured), before you begin. 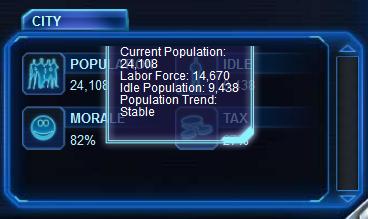 Step 2: – Temporarily decrease your tax rate (located at your headquarters options menu) to the same percentage as your casino’s level. Drop 20% off your tax rate, so again for a level 7 casino, you want a 7% tax rate. Now watch as your population and morale increases, and in a few minutes your population should quickly settle at a stable maximum, with Morale at its maximum as well.

Step 3: Now use the Poker tournament option. Great for making a large sum of gold every hour! Your morale will drop by 20%, which is fine because the next thing to do is reset your tax rate back up to the magic “20 + Casino Level” number. This way, you’re able to recover your morale to a level that’s still earning a decent chunk of money per hour whilst your morale has less percentage to recover.

Step 4: Repeat every hour, allowing about ten minutes before the countdown is finished and the next event is available to ensure your population and morale are at their maximum ready for the tournament. The time varies depending on the size of your population, so for a bigger population, it will take more time.

3. Spread the wealth: Money can buy you happiness!
Only ever once per upgrade level!

At first this kind of event might seem pretty useless. After all why should you spend all your hard earned currency making your population temporarily happier? Well, it’s all down to the timing. This event should only ever be used immediately before an upgrade is almost finished! Why? It costs just as much as the money you might get from holding a poker tournament right? WRONG!
To make this event ‘work’ you have to wait until your casino is just about to finish upgrading a level, and activate it just before it finishes upgrading; a quick 10% morale boost is good as it increases your population, and then once the upgrade is finished, hold a poker tournament. This way, you’ll gain money from holding the poker tournament, but only have to spend 10% of your morale getting it. The key is to spread the wealth so that your population hits its maximum just as your casino finishes its upgrade for optimum results.

4. Title Fights!
This is for the more advanced players (Requires a level 3 casino)!

Title fights have a much more obvious plus side. They don’t cost any gold at all (It’s important to note that the bottom of the screen may still have a glitch, but the actual cost is 20,000 Stone and 20,000 Oil), and give you a nice 5% morale boost that comes in handy when you want to increase your population and 5% march time reduction which has more obvious uses. I find this is best used in conjunction with either a poker tournament (see section 2) or a ‘spread the wealth/ poker tournament’ combo (see section 3). It can be used to decrease the morale recoil time of either scenario and of course, costs relatively little amount of resources. However, it’s also useful for slow-moving ground troops marching long distances, which could be the decisive factor when it comes to gaining, holding or losing a strategic resource tile or a wild. Who can say when an enemy might attack you? You might just make it there in time if you’ve knocked off a few minutes on a long march time!

To summarize, don’t neglect your population’s gambling habits! Build your casino and use it regularly; it’s far more useful than it first appears, you just have to know how and when to use it!