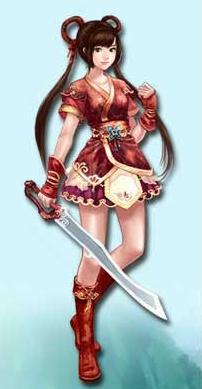 Intoduction
A refined pure jade-fairy was degraded to be a common folk who had a sheer infatuation to her right match. A young girl with childish look
on her face and talented intelligence on the martial arts. She has a special feeling to Houlie Xia who takes care of her like a brother.

Class:
Swordswoman with the balance of mono and group skills.

Returning Air to Blow – Passive Skill [Permanently increase HP by 1% and MP by 1.5%]

Jade in Mouth – Passive Skill [14.3% chance to do an extra attack during attack]

The Sovereign – Group Physical Attack-Curse Skill (lvl60) [Hits all the target with 123% Basic Physical Damage, Removes Invisibility and a 14.3% chance to confuse the target]

A Liuli can be a Tank and a Damager, basically, most of the characters needs a decent amount of HP as they gains a level since Chief Monsters(Instance Bosses) can easily  take you down in one hit if you don’t have enough HP for your level, especially at Demon Prison Tower. So for this sake, adding 2 to Vit/Con(Vitality/Constitution) and 1 to Str/Arm Power in each level you gain would ensure Liuli’s survival, both attributes gave HP but Str don’t give as much as Vit do. So it will be a best thing to do until you get a 9k or more HP and after that add all the points you get each time you gain a level to Str, that way you’ll get more Damage and some more HP till you get to a higher level.

For level 1-29, Newbies gifts (Armor and Weapon) would do, but if you want something more powerful, the Yellow Liuli Sword from IFM(Ice-Flame Mountain)a lvl15 instance, will be a good choice for lvl15-21, you can ask for it from high level players if they got one and showed it on the World Chat…

At level21, the Xuanwu’s Sword, Liuli lvl21 sword, you can craft this sword at the Blacksmith(Equipment Store) will be a good choice provided with some sky stones to enchant up to level 4 with 2slot for gem inlaying.

For level 30-39, A weapon from Demon Prison Tower(DPT) would the best choice on this level and for the Armor, equipments from the Secret Underground Palace – Imperial Mausoleum(IMP) is the good choice.

At level 40 and above, DPT equipments will be the best if you can get them. Below are the equipments from DPT.

Gems to be inlayed:

Armor (Hats, Clothes, Shoulder Pads and Boots)
These are the gems you need for Armor, +Vit (Constitution) gems, such as:
Heaven-gate Beast Gem Vit+5
Sharp-teeth Tiger Vit+4
Green Python Vit+4
This 3 gems will surely boost your HP,
if you would like to continue enlaying gems on your equips, +Agi (Body Movement) gems would be the best to enlay next:
Mountain Warrior Gem Agi+5
Mausoleum Stone-guard Gem Agi+4
Octopus Gem Agi+4
I choose +Agi gem since it can increase few ATK, Speed and Hit Rate.

But I would prefer this Gem if it’s available:
Cannibal Ant Gem: Deadly Hit Rate+1%

for the next 3 slot if it’s already available through drilling;
Spirit Stones, Powders and some Gems from Instances will be best if it’s available.

These are just some of the Spirit Stones and Powders that you can enlay on this Equipments, the rest will be up to you to discover.

I’ll add more in this guide as i progress ingame. Ascie lvl50 Liuli…
Thanks to all who help me ingame!! Thanks for all the help!!!
Hope you like my guide, this is my first time.