What is a gem and what can I do with it?
Gems are rare drops by monsters. Added to your gear they will increase certain stats. Take this Sharp-teeth Tiger Gem for example: 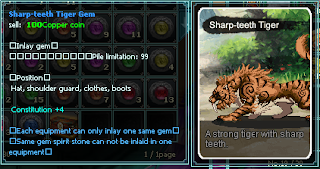 This is a Sharp-teeth Tiger Gem, so it is dropped by Sharp-teeth Tigers. Position is the kind of equipment you can put the gem into; this gem is for hat, shoulder guard, clothes (= armor) and boots. Other gems can only be put into cloaks and wrist guards (for example Rampager or Undead Knight gems), others can only be added to weapons, necklaces, rings and magic weapons (for example Tiger-Man or Lizard gems). Spirit Gems and Powders say “All positions available” which means you can put them into any kind of equipment, even fashion items. There are Spirit gems of all monsters, but the drop rate is very low, so good luck! ^^
The light-blue text underneath the position is the Stat this gem will add. This Sharp-teeth Tiger Gem adds “Constitution +4”, which means VIT +4. The translation of the gems can be a little confusing because they use different words than in your character info: 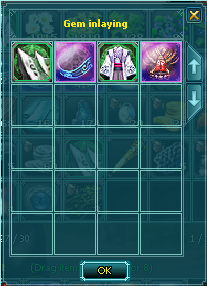 Select the one you want and click “ok”. Now you will see the added gem when you look at the equipment’s info, too:

Now the Sharp-Teeth Tiger gem is in my shoulder pad. I added another gem, the Green Python gem which adds another 4 VIT. My shoulder pad says “gems inlaying 2/2” now: it only has 2 slots for gems and I already added 2 gems. You can make more slots for more gems, altogether up to 5 slots per equipment.

To make another slot, you need a Powerful Drill, which you can buy in Gold Shop or exchange at grocery for Sword Gold Coins (you get 2 drills for one SGC). Again, have the drill and the equipment in your bagpack, click on the drill and select “use”. Select the wanted equipment item and “ok” and you made another slot. Don’t forget that you can drill your fashion items, too! (From Gold Shop, head changes like the foxes fake face and of course your eyeshade, too…)