So… you went around the BoD’s, BoM’s, BoC’s and tried to punch the living daylights out of people?

Got owned? Got ignored? Got stuck being a buffer? Well you came to the right place

Wish you had a sword? Think again. Real men use fists!

Generally, shamans will be prepared for pvp when they get GN at 25. GN is very powerful but, has a fairly long cooldown of 35 seconds. What will you do on the 35 seconds of downtime? On most shamans, they would just run around until the cooldown is up (hence the tactic: dive – aoe – run – wait for cd – repeat). On this build, we make use of the full 35 seconds to make the opponents miserable.

Should you PvP before 25? You can but with the fast exp coming from quests, you can hit 25 in a less than a day and then you start owning.

Why make a PvP build?

– Well, if you haven’t experienced the exp rewards on the later levels of BoD and BoC, I will tell you that they will be a blessing. I managed to stave off grinding until level 34 (at 80%) due to constant participation (and wins) at BoD and BoC starting from lvl 25. PvP in these arenas is like mobbing, you farm other players

– BoD’s bring all sorts of mixes of levels and classes. From my observations, there are a lot of low-leveled classes participating and they will all be easy prey (provided they don’t choose to go for over-upgraded gears early on, else, we have a problem)
*had to change this in general since on end-game levels, everybody gets tougher to kill
– This build usually nets 12-30 kills on average in BoD. My personal best was 40+. (this was the situation back in early CBT-OBT)
* had to lower the values based from the current situation
* not a sure guarantee that you will get the same results as mine
* you also need to keep up with the arms race to make this build shine

– In the current BoD structure, the build could net around 4-12 kills (everyone got tougher)
– On BoC, the best I could muster was 4 kills at most. I focused more on tower damage.

– This build is not only good in the arena’s, this is good for soloing. I noticed that I can solo most map bosses even with un-upgraded solid gear.
* saw a forum post the other day from someone who claimed to try all the classes. that person said that shamans are weak on 30+ mobs. well, probably they did not build it right.

Predator Instinct and Strong Body – maxed
– If you can’t see why, then stop reading

Defensive Instinct – maxed
– +5 def and +.7% protection (damage reduction) for .3% crit and evasion sounds like a good deal
– Very helpful at tanking mobs and players early on
– A better use for the increase is to act as a damper for debuffs. Ranger and gunner debuffs are a pain even if you have ways to remove it since at mass pvp, there are at least 3-4 rangers and gunners present per battle. Last longer, burn less pots, buys time for more dps . Even with the debuffs, you will still be a pain to kill.

* Why no hp regen passive?
– The damage you will take in pvp will outweigh the regen.
– You will eventually get hit by DoT damage making the regen moot.

* Why no property hit?
– This is debatable but I prefer going without it.

* Why no elemental resists?
– Waste of points imo
– I’d list Dark Resists as a “maybe”. Since dark effects include disables and debuffs.

Energy of the Earth – maxed
– Grants you 30 mins of added damage reduction. Also, you can cast this for party members or teammates on battles.
– Adds another “damper” for debuffs.

Deification and Darken – 1 (optional)
– high elemental resists for 15 seconds makes walking into magefire and scout traps a breeze. Oh, and deification has +30% prot at lv 1 for 15 secs (more diving power!)

*why no hp regen buffs?
– as said before, the damage you sustain in pvp can and will outweigh the regen.
– it may be helpful while out of combat but it’s the battles were talking about here, where the only place to rest is at the spawn point.

Restore Stamina – 9 (or lower, depending on your preference)
Wave of Life – 6
– This is what makes the shaman fairly hard to kill in PvP. These are your secondary pots.
– When you take damage, prioritize on using heal first rather than depending on your pots for regen. Smart enemies will not let you use pots, they will time their stuns right.
– Use it as often as needed in battle.
– RS heals for 1900 at rank 9.
– WoL heals for 1000 + 20% max hp at rank 6
– WoL becomes more effective once the max hp surpasses 4500
– The ranks in those heals are more than enough to last you until you get to 40.
*short edit: had to modify the values to fit the final skill points.

Cut Off Blood Flow – 1
– 2s Mid-ranged stun, with a 1.5 min cd
– Use this to stun runners or to initiate on a threat.
– If using this mid-fight, first try to chip the hp of your opponent and see where his hp pots trigger (usually at around 40-60%) then repeat the process and use the stun before the trigger. (This technique needs a good eye and precise timing)

Phoenix Strike – 1
– Long range damage skill
– Used for luring mobs on pve and landing chip damage (or lucky kills) on pvp.
– This has bonus elemental damage that isn’t included in the tooltip

*I’ve seen some shamans max this skill out but it would be a waste of pts imo.

Asura Phoenix Strike – maxed
– Long range damage skill
– 2.6s stun with a 2min cd
– This also has bonus elemental damage that is not included in the tooltip. (I estimate it at +50-66%)
– Here’s a damage perspective: Rank 3 usually deals 1.1k damage in PvP (provided it’s not resisted).
*tried a Rank 5 on a lv 40 shaman with imba equipment, I only dealt 800+ (but still, that’s some considerable damage)
– Use this to kill low-hp runners in 1 strike.
– Use this to open on priority targets.
– The skill has a charge time so enemies have a small window to react.

*Why max this skill when the stun and cd is unchanged?
– Simple, the burst damage is too good to pass up.

Great Nature – Maxed
– Best source of damage post-25.
– Fairly lengthy cd of 35 seconds
– This is what initially racks you the kills in pvp.
– 1-hit nuke to people under certain hp levels
– Usually used as a finisher for stun combos.
– Short note: The AoE hits about 7-8 max so limit mobbing to these numbers.

Concentrated Strike – 1
– 4s slow and silence? Yes please!
– 1 min cd, no damage though :|
– You can use this to initiate or to follow-up a stun.
– Badass animation

Lunatic Strike – 1
– If this gets fixed, the 1s stun will be very helpful
– Given skill when you create a shaman
– Acts as a filler skill when all skills are on cd
– small note: you can remove this skill when you get the reset at 23 if you think this would just be a waste of quick slots and mana, giving you 1 more point to use on any skills you might need.

Beastly Strike – maxed
– 6s cd, good elemental (dark) bonus damage
– main skill you will use when GN is on cd
– used for chipping the hp of the opponent
– if used on weaker targets, it can instantly kill
– instant cast time

Violent Wild Strike – 1
– 10s cd, good burst damage
– secondary skill you can use
– used as a secondary finisher paired with a stun to compensate for the charge time

*Here comes the debate on BS vs vws.
– If both were ranked high, no doubt, vws would win in terms of damage but in PvP, it is a matter of speed so having chances to pull off vws are very limited.
– Remember, without a stun, it would be hard to pull off vws because of the charge time. During that window you can get disabled or the opponent can get enough distance to cancel the charge.
– You can actually max out vws over BS if you are confident you can land 3 kills using them during the time that GN is on CD.
– Relating to the previous statement, think of the chances to kill. You can have a shot of netting 6 kills on BS than a shot of netting 3 kills on vws.
– You can max out BS and vws but that would mean giving up points on other skills. (Probably defensive instinct if you are confident you can survive the constant lashing).
–  the effectiveness of vws can be reduced by high armor and protection values but the effectiveness of BS gets reduced by    armor, protection, dark resists and magic def. from observation, BS still gives more consistent damage considering the factors involved in damage reduction (since magic def and dark resists usually takes a backseat in preference to physical defense and protection for a player). 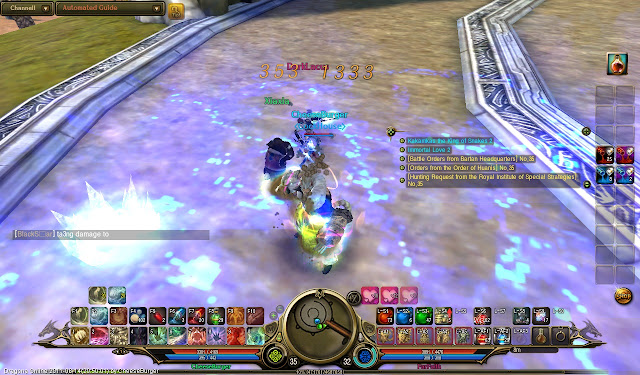 Incomplete full transformation for shamans is relatively weaker than other classes, and from experience, once you transform, you mark yourself with a big bulls eye. Dunno why but people just don’t like a manly lion with a manly spear running around whacking people .

Once you get the complete full transformation however, the build starts to get more flexible. Though from testing it, the best benefit comes from the massive crit buff.

I usually use the partial trousers and arms only in battles to save core in prolonged fights.

I also have seen the power of the 2nd full transformation. The skill-set is pretty strong.

Equipment for the Real Man
*Blue equips for shamans are hard to find so greens are good (unless you have dragon beads ).

Armors: Preferably +4 and above for additional toughness

And here are the much manlier weapons

and here’s the manliest

The preference of weapon for this build is as follows: (1 being priority – that which fits best in the build)

*Note – The ones with the pure bonuses are higher than those with mixed bonuses. And it gives additional min/max when upgraded.

had partial arms turned on for the min damage

If there are any questions, comments, or suggestions, feel free to ask. If you are in Juda, just pm furious if you want to ask some questions in-game.