Too often do I read posts about people trying to fix skills and wanting to know what a certain skill looks like. So what would be better than to have just one post showcasing every weapon skill in the game?

So about 2 years ago, I took it upon myself to fix every available weapon skill in the game. At first, it was really difficult to just fix Phoenix, as I had no moon gems or any socketed swords. I was poor, noobish, and had no idea as to how to level a skill faster. Then I discovered Aithe’s post about Fixed Penetration and I got some really good tips. I started mining and found some moon gems, and after a few months I had 200 pct moons. Leveling Phoenix really sped up at this point, and Phoenix was fixed within three months.

Now a year and a half later, I have finally completed my quest and have fixed every available weapon skill in the game. The original thread to this is in my signature which points to Diamond server, but I have decided to post this in the Tips/Hints section of forums to help out everyone that is trying to fix a weapon skill.

Below is a compiled screen shot of every weapon skill and the level required to fix the skill. Also, a Tips/Hints section has been included.

Below I’ve compiled a list of tips and hints to leveling any weapon skill in the game. These are only my opinions, and others may view them differently.

Without the ability to level skills at a player’s house anymore, I was limited to only leveling my skills on PK maps. Below are some of the places I have tried and my thoughts on each.

– A very dangerous place to level, as everyone is constantly pking. FB and SS wars are constantly happening. This is only a good place to level your skills if you have friends tanking you.
– If you do not have a reborned character to summon a guard for you to level on, you can easily find someone’s guard to level on here at jail.

– This is another area that you can level your skills if you do not have a guard to attack on. Basically, go into Team/PK mode, wack guild gate and watch your XP go up.
– Unfortunately, because so many people know of this map and that there is only the guild gate to level on, pkers show up often. If you plan to level your skills in afk mode like myself, this is not an option.

– This is not a bad place to level your skills. There are not many players leveling on the islands, as most players go for bird men or hawkings. I had many good hours of undisturbed training here. Unfortunately, the islands are far from the city, and it’s quite a distance gate back to town to do repairs and jump back to your island.

– Of all the maps I have trained at, this was the absolute best. Rarely do players go to stone city, and usually when they do, its a noob getting plvled that died at advnace zone. Due to the lack of players on this map, I was able to train on my guard and jump back to the city quickly for repairs without being disturbed by pkers.
– the only disadvantage I found, was that you either had to jump through 4 maps to get to stone city, or needed a teleport scroll to get here. Either way, if you ever teleported to any other city, it took forever to get back to stone city unless you had a scroll.

-I’ve recently started training here after getting reborned and having to do the skills again. It’s a good substitution to Stone City as it’s close to Twin for repairs and few people visit the map. Train near the platforms on the right side of the map as fewer people visit there. Too many people go to the big tree at the top of the map, and you’ll be disturbed by pkers.

– Specifically, Silver Guard, or preferrably Gold Guard. With a guard to level on, you do not have to move and can just stand and hit the guard. Once you start hitting the guard, you can even walk away, grab a drink, watch some TV and come back to start the process again. The reason I say Gold Guard, is that it has a higher defence and life. Thus, it can take more hits, giving you more time to level on the guard before it dies

One of the most important things to leveling a weapon skill is the equipment you are wearing. Most importantly, TAKE OFF YOUR RING!!! I cannot stress this enough. If you are wearing a ring, it increases your attack. If your attack is increased, then you will kill your guard faster, thus causing you to have to resummon the guard sooner and have to start the process over again.
Another tip is to keep the level of your weapons LOW. Quality of the weapon has no impact on the activation rate of a weapon skill, nor does the Plus’s as per some rumors. The reason you want to keep the weapon level low, is so when you have to do repairs, it will be MUCH cheaper to do the repair. The higher the level, then more expensive the repair. On the other hand, the higher the level of the weapon, the higher the durability. A balance will need to be found. For me, it was a level 40-50 weapon. Durability was high enough for me to repair the weapon 2-3times without losing too much money or damaging the durability.

– One of the easiest ways to make your skill activate faster is to hit faster. The transformations of NightDevil and WaterElf both give attack rates of 200 to 300pct increase. The trick is to change your form when your XP bar hits 100pct, and wait until your timer goes down to around 3 or 2 then begin hitting your guard. If you start hitting when your timer is higher, then you’re just reducing the life of your guard, thus decreasing the amount of experience you can gain off of that guard.

– Moon Gems are an excellent source of weapons skill experience. If you have 100pct of moon gems, the weapon skill experience gained is doubled. So instead of gaining 0.010pct for phoenix, you gain 0.020pct. However, if you have 200pct moons, you gain 0.030pct and NOT 0.040pct. At 300pct moons, I’m assuming it’s 0.040pct gained.
– There has been much debate regarding needing 100pct moons inorder to gain more skill experience. From what I have noticed, even at 60pct, you skill gain a bonus. It’s just not on every activation. Usually the 2nd or 3rd activation, you will notice a slight skill bonus.

– I’ve done testing and have confirmed that holding two identical weapons while leveling does NOT increase the activation rate of a skill. Skill activation is based off the type of weapon held and not the amount of weapons held. Ie. Holding two swords will not cause phoenix to activate faster than holding only one sword.

Strength
– If you are reborn, modify your atrributes by changing your strength to only one. It has been confirmed by multiple users that with a strength of one, you will only do one damage while training on mobs/gold guards. However, I’m not sure at what attack rating will cause that damage to increase past one, nor have I tested this to confirm.

– This was the best tip I gained after reading Aithe’s post on leveling penetration. It appears that if you stand exactly parallel and 2 character spaces from whatever you’re attacking, the activation rate of your skill is MUCH higher. I have no idea, but I tested this out while leveling and I did notice that I seemed to gain more experience per guard I killed. If you’re unsure of what I mean, look at my compiled screenshot of weapon skills. You will see i’m standing exactly 2 character spaces parallel to the guard I was attacking. It does not matter if you are standing, above, below, left or right of the Guard.

– Oddly enough, these skills are based not only on activation, but also the amount of damnage done. If you don’t believe me, take off your ring and hit a guard. You’ll notice you’ll barely gain any xp or if any at all.
– Multi hit activation skills (IE, Rage, Roamer, 2 handed weapon skills) appear to level faster when you’re hunting because you are hitting more than one mob at at time. If you use rage on one mob, you’ll notice you gain say 0.100 on the mob. But if 3 are around, you’ll gain 0.300. Now this number will vary, because it is also based off of the amount of damage you do.

Well that is it from me. Feel free to post a reply if you have any questions I will try you help you out. Alternatively, you can read up on Aithe’s Post on Fixed Penetration for further tips and hints. Thanks again to all my friends and for all their support and guards to level on. Especially to StAr-FiRe for keeping me company and chatting with me during the boring times. And there were a LOT of boring moments.

***Update*** It’s been brought to my attention that my picture there does not have Penetration. My original picture was deleted after forum upgrade, and this was all I had saved on my pc. I’ve uploaded the original picture of when I fixed penetration on page 5 for those that want to see what Fixed Penetration looks like. Enjoy. 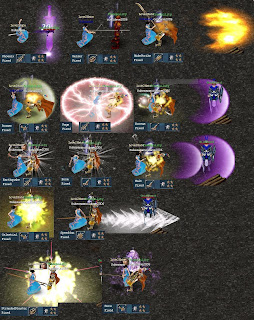