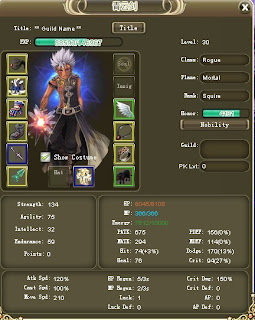 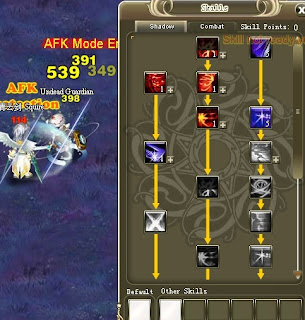 Alright, how do i start this…

The definition of rogue is to kill an opponent as fast as possible, therefore you need high critical, high speed, high damage…(always remember this)

All since you got this far let’s start, before rebirth(which is level 60 in case you didn’t know) add all your attributes to strength (after rebirth all agility)
when you first started no one have good equips so high strength gives you good damage and helps you level, after rebirth you will have somewhat decent equips if you did
your dungeons, agility give you critical, hit, and dodge chance, and since rogues have really low defense dodge makes up for the defense lose. critical gives doubles the damage
so it will also make up for the damage lose.

After rebirth all your attributes will be reset and your level will also be reset to level 1 and you will start from the beginning again (yay how fun is that)
The good thing about this is you will get 50 attribute points and 10 skill points to distribute (good luck leveling without quest though-.-)
btw all your equipment will drop to level 20

now since none of us are level 60 yet i’ll just talk about how to distribute your skill points before level 60 (you don’t have to follow this guide people have their own opinion on things)
first i’ll talk about shadow (because i’m shadow), then combat, then hybrid
(before rebirth, after rebirth)

This is my little way of helping my fellow Combat Rogue or aspiring to be one.

Note: After a number of tests done during alpha, i have formulated a build that is based on my experience the best way to build a Combat Rogue. It is up to you if you will follow this guide or not. Any dissatisfaction to the result of your character in the future is at your own risk. Hehe

What is Combat Rogue

This class can deal high damage using chain skill, inflict poison, or leaving its target bloody till its hp drains.

Lets talk about the stats:

I personally tried to make a Full AGI combat rogue in alpha. I tell you the damage is sucks and your dodge is just like you didnt put agi into your character.

Full STR combat rogue. All i can say is that the damage is great but there are times you miss on the target. You need to have a nice gear into this build specially those gears thats gives additional hit. Or upgrade your bracer fast so that you will have no problem i pressume.

STR/END combat rogue.(2 str/1 end distribtution) I have talked to some rogue players during alpha and they said this build is fine. Though i think same like Full STR build you will also need gears with hit booster. The good thing about this build is that you will have high HP and a pretty well amount of defense

STR/AGI combat rogue.(2 str/1 agi distribution) For me, this build is just suited the skills of a combat rogue. AGI means hit, dodge and critical. No chance to miss unless its a high level boss or player. Can dodge more often and better if you have slayer’s deftness skills for it will boost your dodge by 10% when level 5. It can do Criticals more often to a target. You need to hunt sapphire and amber and embed this into your equips to boost your pdef and mdef.

i have 3 extra skill points so i will put it here:

Shadow Slap – 1 (this is very uselful in pvp for it forbids the target to use comsumable for a period of time. i will max this out after reborn)

At level 34 you will have this skill tree: 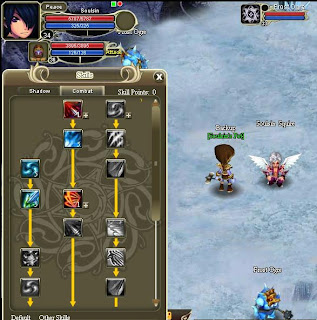 These pets have skills to boost dodge of the master. equip them with charm skill is ftw.

a set of these:

Enjoy the game guys and have fun!