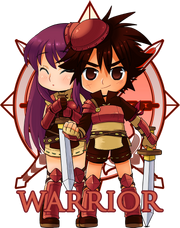 I have a high level warrior character in TW server and i think my experience and review regarding this class will be helpful.

First i would introduce about Warrior Class.

Warriors are close combat fighters who like to be in the thick of battle. Encased in heavy armour they are protected from the strongest physical blows. They are good at dealing damage while protecting their team and have a strong resistance to physical damage but low defence against magic power. They should not be underestimated, as they are resilient and nearly always found on the front-line.

I will start review from the stat of warrior.
Warrior is the class get maximum feedback by investing on Strength and Cons.
The growth for warrior is base on:

here i want to empharsize, if u are choosing MARS talent, go for FULL STR
and if you are going for the GUARD talent (which not many people choose), go for full CONS
there is no intermidiate like 3 + 1 or 2 + 2. You have to choose specific to 1.

And this game, evasion is not really play a major role, most of the time even vs full Dex ranger, 90% of the time you won’t miss.

As you know, warrior talent divide into MARS and CONS.

Here is my review on warrior talent,

MARS-right-Ultimate Wild-Blood-Sacrifice
This is probably the best talent for MARS.

– Perserverance(4)
and the greatest after all…

This is what u distribute the talent point (27 points), extra of 4 (at 100 level) and 3 missing points even in other version giving a total of 36 points.

Just distribute according to my suggestion because this is just the basic requirement for the next talent to be learned, keep the remain 4. Keep this 4 points coz is essential to learn the 2 ultimates after reborn (otherwise you will have to visit the mall and pay for talent reset)

here i want to add some add-on,
1.Sacrifice attack is not a useful skill, so only up it to level 4.
2.Armor Breaking is the Imba skill in this class, at maximum level it gives >>
Disregards the enemy’s armour, Attack power 310
That is a against Guard Warrior because no matter how much ur defense you equipment gives you, how many cons your Poss pet and how many Cons you get from you Cons Stat… The attack breaks your armor….

Wild blood sacrifice
Promotes own physical attack by 100% and movement speed by 20, simultaneously reduces own physical defense and all magic arts resistanceby 150, last for 30 seconds.

This skill gives even a noob to deal powerful damage and makes the warrior the most killer in the late game instance,
What so special about this skill is equipment and your pet give you fixed physical damage but this gives you
100%….

So this is the ultimate of Attacking skill, no other class can deal damage higher than Wild blood sacrificewarrior. This is the Ultimate form of warrior, highest damage and fast speed.

This is even more terrified when warrior have a pet with Sneak attack ( decrease pet 1st strike cooling time ) + Stimulation ( Inrease speed for whole team), this fasten the warrior to cast his Wild blood sacrifice in his 1st
round.. Of course this is the ultimate formation for warrior, not many person can do it coz u need CASH…. T.T

The next point i am not very sure about,
There is a pet skill Sacred light shine which its effect is to remove positive buff on a opponent,
in TW version (OMG), u cannot cancel this skill by Sacred light shine, however in Chinese version u can.
Thus, i feel in PF (PlayOMG) version, since the company is the same, the ulti cannot remove by pet skill which makes it even imba.

Next i will continue about the –
MARS – left – Ultimate Cross-Chop

Rage sweep is a very unique skill for Warrior, coz warrior itself is a melee attack class but this is the skill allow the player to hit the roll or the pet on the second roll. This skill is very effective in instance coz it attacks a roll.

comes to his ultimate:

This skill is awesome as he attack twice of 300 giving 600 intensity of damage in total.
This is so far the highest single attack skill in every class. However, this skill has its negative side, that is there is a
15S cool down and cannot reduce by +speed skill like dexirity or stimulation.

Nevertheless, this skill is cool as it can deal the highest damage on the 1st strike to KO opponent. It is suitable for PVP to KO people opponent before opponent start to deal damage on you. This skill is predicted to become popular after reborn release (where u have 50 talent point) and be able to have Wild blood sacrifice + Cross-chop giving the nightmare of all opponent…!!

Conclusion;
This is not as popular as right -Mars but is rather cool because of its ultimate and Rage sweep for instance use.

First of all, let me define the role of Guard (defensive) warrior in the game.
In instance, Guard warrior cast Mass taunt and tank the opponent damage. With a pro guard player, the team can complete Challenge instance which requires 10 level higher of ur current level. So this talent tree warrior is popular in challenge instance, but maybe not normal instance due to the low damage output.

However, the Guard warrior play a irreplacable role in high level guild war and team battle ( both are not released yet).
Usually in first round, both team will target Chaos Dark Priest to stop him from casting Chaos(-50% of damage to enemy team), Guard war is the one to Mass taunt the enemy team and cover the priest. Of course the above are high level guild war and u may skip this part to avoid confuse.

So if you choose this talent, you have to have enough gold to forge good purple equipment that boost your defense, and not solo-style of playing cause your low damage is the cost for ur high defense. It takes longer time than normal player does to do normal quest.

So start on talent.

There is a necessary to raise ur Protection to maximum because level 5 and level 4 differ a lot. Please bear in mind only put ur talent point in necesary place like i suggest above, otherwise you wont be able to learn the 2 ulti at max level.

Invincible Conviction
During 20 seconds avoid all injuries, but reduces own movement speed by 20.
This skill cannot be eliminated, or + speed by skill (stimulation etc).

This is the skill that cast after Mass taunt (Has 80% probability to taunt the enemy party continues for 20 seconds), and you will take the chance to Potion or etc.

and probably make the enemy party off-fire for 20s.

As i mention earlier, the guard warrior is against by ARMOR-BREAKING warrior coz the damage dealth disregard ur physical defense. However, it will be a tough time for ranger to defeat you because of your ultra high defense.

Conclusion: This talent is not easy to handle. But it is the shield to the whole team and tank the damage from enemy. Not very popular as everyone wants to be killer but not supporter.

I am not very familiar with this section and this talent is very rare among warrior.
So i will leave this section empty for other experienced player to comment.

PS: Skip this part if you have read my earlier post regarding choice of pet

So what a good Def pet should posses is

high HP growth score
(Secondary high Cons score, this is because cons boast Hp of the pet by a little.)

Thus, I would recommend few pets available now (or soon).

I dont put in the Cash pet-butterfly on rank 3 because the pet worth more in attack position.
Although she has a 513 Hp growth, is a waste for her to in Def Pos.

Poss Pet
Poss pet is giving 15% of its stat to the player,
However, This can be increase by having resonance lvl 4 (giving 50% extra to Poss Pet)

In my opinion,  if you have Steel Beast and Phantom ,
Phantom might be better Attk Pet compare to Steel Beast,
Better to put Steel Beast as you Poss Pet.

Attack pet u can choose anyone, there is no specific for class
and i written a review on Attack Pet, i will just copy

Attack pet
Attack pet basically has to have the following component
1.Moderate or High Hp Growth (the most important)
2.Deal moderate or high physical damage or magic damage.
3. Useful Skills
( Healing for Duck/Dolphin, Canon Strike for Phantom and Android 18, 3 hits strike for Aquas dragon etc)
***The aquas dragon is not available yet***

Pet u can catch in game (non-cash pet)

Steel Dragon – High Hp and High Cons, Moderate Str but low Dex
-The bad side of this pet is its 2nd skill -150Hp before his attack

ps:I didn’t put fire dragon because sea monster is a advance version of it. Every stat of Sea Mon is higher than it.

Rebellion Angel – High Hp and Moderate Cons, Moderate Str and High Dex
-A popular Choice of Attk pet due to its balance stat and attractive looking

Fallen Angel – Moderate Hp and Moderate Cons, High Int and moderate Sprt
– Not as popular as Rebel Angel due to its Moderate Hp

Devil Cavalry – Moderate Hp and Moderate Cons, Moderate Str and High Dex
– Very few players choose it to be attk pet, but its skill allow him to attack a colum (player and pet)

Fantasy Sprite – Moderate Hp but low Cons, Moderate Hp and High Sprt
– One of the cuttiest pet in this game
– Can be obtained from ancestral instance makes it hard to obtain by low lvl players.

Phantom- High Hp and Moderate Cons, Ultra High Dex and High Str
– Canon Strike strikes disregard the armor. Perfect agianst Guard Warrior and Boss
-Ultimate Poss pet for Ranger or probably warrior (it depends)
-Sexy looking but u will “= = ” if you found out ‘she’ is male

All the pet cash player requirement is lvl 0

Each pet get 1 Training points when level up by 1 lvl.
However, The higher attribute u add, the more training point is require.

Thus is a serios matter to distrubute you point efficiently between STR and DEX.

The Stat a MARS equipment  look for is always
Orange on Attack + Str + Dex, some prefer critical
Orange Stat have higher Stat than Blue(Non-Orange)

Equipment is what distinguish between good player,
A Orange in the desired Stat helps improve your damage.

Always forge a level 0 purple weapon but not other level.
There is a reason behind it, might add in later.

I would suggest u look this link before you post your question
>> http://forum.playomg.com/Default.aspx?g=posts&t;=476

Q>> What is more important? Attack, Str or Dex for the sword?
A>> The best is to have Orange in Attack follow by Str and Dex.

Q>>How many 8 can i get from level 0 item maximum?
A>>3, and some part in Warrior Equipment you can never get 8 at level 0. I will add more in this part.