This is a guide of Carl’s Skills thus far in the game. This guide is completely opinionated, but I will back up my reasoning to the skills.
Keep in mind this is a guide for Carl’s EXCLUSIVE skills. 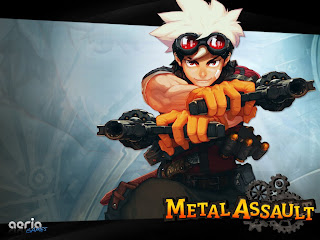 Active skills will be in RED
Passive in BLUE

Your character will do an awesome rolling forward jump. Keep in mind that he will jump in the direction you are facing. While dodging you will be able to dodge bullets, however rockets can still hit you.

(at least I’ve died while mid jump to rockets)

This skill is great even at level one. Great offensive and defensive skill. You can jump over gaps and dodge a bunch of bullets. If you use the skill properly at the right angle, or on hills you can get some serious distance. As the skill levels up the only thing that changes is the Cool down time and decrease in MP cost. Meaning you don’t jump further or faster. Best strategy with this skill is to RUNNING JUMP and as SOON as you land you can fire. None the less a MUST for Carl’s everywhere IMO.

]
You gain unlimited SP for a certain amount of time.

Although this could be a great skill there are not enough skills that actually USE SP Carl consumes SP while using Dash like everyone and while using the zoom on a scope. Other than that there don’t seem to be any real uses. You could steer clear of this one.

WITHOUT THROWER SKILL
The Red Line is the INTENDED direction.
The Purple Line is the ACTUAL.

WITH THROWER SKILL
The Red Line is the INTENDED direction.
The Purple Line is the ACTUAL.
(As you can see there is QUITE a big difference with this skill.)
Passive skill that INCREASES the speed and range of grenades thrown.

With this skill you could easily angle grenades better and also catch your enemies off guard.
Unless you’re planning on investing in Grenades there isn’t much to this skill. In the end it’s totally your choice if you want to get this skill or not.

Demo Instinct
Passive skill that DECREASES the time it takes to charge for grenades and plant mines by
2 SECONDS. MEANING you can throw grenades EVERY SECOND.

Before the nerf on mines this was an amazing skill to have. Now it falls back into the maybe category, with mines not being as affective this skill is totally up to your choice, once again if you are going to be a heavy grenade user by all means go for it. You’ll be throwing grenades like uhh…[insert lame joke here]

Passive skill that REDUCES damage you take during a big fall.

This skill is very conditional. I myself have been saved by having this skill many times, but it is quite expensive 9 SP?! to take a little bit less damage from falling? Isn’t a must have, but it wouldn’t hurt to invest.