Hello everyone! As the topic says, this guide presents a detailed overview to the tanker class in Iris Online – the Warrior.

At this time, it’s still too premature to have a 100% consistent and solid tanker build as there aren’t many high levels characters around Iris yet. Note that all your feedback, positive AND negative, will be very helpful in order to progress this build.

I apologize for any typos or grammar errors and, if you don’t mind, please do correct me. Thank you in advance! Let’s get started.

2. CHAPTER I – The Tanker path

In order to be a tanker you must choose the Hybrid race and Warrior class (do not confuse with Fighters).

At level 30 a WARRIOR can evolve into GUARDIAN.

At level ??? a GUARDIAN can evolve into CHAMPION. (what’s the switch level, anyone?)

As a tanker, your job it’s quite simple – concentrate all your foes damage on yourself forcing them to attack you, avoiding at all costs that any of your party members gets hurt. This is when “aggro” becomes an important term for tankers:

“Aggro denotes the aggressive interests of a monster/NPC”.

Managing and maintaining the aggro of monster(s) is the most important task for tankers. As a Warrior Guardian you have at your disposal several skills to keep the monsters attacking you, some better than others, which makes the task somewhat challenging. Keep in mind that you have only full control on monters/NPC’s aggro but against players you won’t be able to force them to attack you directly. Basically, direct aggro works for PvE but not for PvP. You can look for more details of aggro maintaining skills on the skill chapter below.

A. When you completely fail to get the aggro due to nervous/rushing party members.

Make sure that you ask politely to all the players in your party to leave you alone 4-5 seconds with the boss/monsters before they all engage into battle. This way you can force the boss/monsters to attack you properly.

B. When a player in your team is inflicting very high critical damage that is superior to your aggro maintain capabilities.

This is another very common situation that mostly results in failing the boss/monsters. When you have a player in your team that is dealing massive amounts of damage, the artificial intelligence of the monster will think to himself “Hey someone is hitting me so hard that I believe I won’t be able to meet my grandchildren. I should stop playing with this boring shield guy and hit that guy back there holding a fancy staff.” When this happens its chaos. To avoid this, watch for the yellow numbers and if you are able to identify which one of your team mates is doing high critical damage (mostly Warlocks, Rogues and Magicians) ask him/her politely to slow down and add more interval between his/her skill spamming because you won’t be able to maintain the aggro much longer if the spam continues.

But remember to ask it politely, because inflicting high critical damage is NOT BAD, in fact it’s awesome. You only have to say…”Hey buddy slow down a little bit or your massive power is going to kill us all!”

It’s always better to kill a boss slower than causing a party wipe.

C. When you forget to use constantly (spam) aggro maintaining skills.

D. When your aggro maintaining skills are low level and low efficiency.

You must upgrade the level of your aggro maintaining skills so their efficiency is stronger.

You lose all the aggro after you die.

To finalize, don’t forget that you will always rely on a healer to heal you and on DPS (damage per second) classes for damage purposes. You are not either a damage class nor a heal class – you are a TOUGH class that is good in taking and mitigating huge amounts of damage. You work better as a cooperative class rather than a solo character. Your damage output is low and soloing can get slow and boring, though it’s doable if you have an appropriate armor/weapon set for it, especially with enhanced gear. And yes…according to my MMO’s experience, at high levels you can solo bosses, but never the strong ones of your level or higher levels.

Stamina all the way! Focus on getting the most stamina possible to be able to tank everything on your level range. Note that all you have to worry about for proper tanking is stamina, all the rest is irrelevant/less important for tanking purposes.

“No way, I ain’t going full stamina…come on I need some Power too!” – WRONG. Are you bored because killing monsters is taking too much time? Well party with someone around that can damage more than you, ask him to stay close to you and aggro everything to yourself. “Yeah, yeah. But the guy keeps rejecting my party invite. He is more interested on soloing!” – screw him, you don’t need him. You can come back later to the quest spot OR you are not even worried about it because you brought in your inventory all your DPS full gear, including armor pieces with +Power bonuses and/or cards and weapon/shield with +Power bonuses and/or cards. Yeah don’t get bored, you are still very autonomous.
“Hmm. You are not dumb at all, but what about my hit chance? I’m starting to miss monsters!” – keep an eye to debuffs that monsters may cast upon you. If it the debuff reduces your agility or your hit chance don’t panic – reserve a single accessory/armor piece/weapon to boost up your hit chance/agility (boosting agility up increases your hit chance).

Though it can get tricky to have an extra armor set in your inventory, when the inventory slots are very limited. Get a +3 one handed sword they’re not too much expensive and the extra damage will help you on questing.

Below you can see how attributes in Iris Online behave.

One point into Power generates:

One point into Stamina generates:

One point into Agility generates:

One point into Intel generates:

One point into Wisdom generates:

Tanker has some important secondary attributes to take into account. Below, I’ve listed those that are the most important, by order.

HP – Most important secondary attribute. The higher it is the better will be your tanking performances and the longer you will survive.

Magic Defense – Extremely important secondary attribute. The higher this attribute is the more magic damage will be mitigated. By nature, tankers lack on magic defense and they tend to be squishy against magic damage. Though, there are few armor pieces/accessories and skills that can help you a lot to counter this “handicap” when dealing with spell casting monsters/players.

Hit Chance – Very/moderately important secondary attribute, varying between PvE and PvP modes. You want to consider boosting this attribute for PvP and specific situations in PvE. When dealing with Rogue classes it’s extremely important to find ways to boost this attribute, in order to counter the miss rate.

HP Recovery – Moderately important secondary attribute. Every 10 seconds it will regenerate a certain amount of health. The higher this attribute is the more health you will receive each 10 seconds. Note that if you sit by pressing “X” key this stat will heal you much more each 5 seconds.

During my research for this guide, I’ve encountered an important detail that probably it is unknown to most Iris Online players.

Do you know that Champions (Warrior high level sub-class) receive +Power attribute per each level more than any other class in the game? That’s correct, they do which makes me predict that their damage output at later levels will be pretty balanced, but never higher than a Vanquisher or a Myrmidon sub-class. Still, this is very interesting.

Below is a quick list of Tanker class/sub-classes attribute modifiers.

Your first impression is “Wth! They are the class with the highest HP amounts but they barely get more stamina per level?” – yup! That’s why stamina is so important for us tankers. You also understand that our agility will be very low at later levels when comparing with other melee classes and this will most surely screw up your hit chance, as higher level monsters/players have very high evasion rates. Though, we can always get some extra hit change through POWER (0.1 Hit Chance per each 1 power point).

C. MY GUARDIAN BUILD – an example how things are going with my guardian.

D. CHAMPION BUILD – a build with many questions still to be answered and what all tankers should aim for.

NOTE: at level 30 Prince Shilly Grankine, found at Terminus north, gives you a SKILL RESET POTION . This potion resets all your skill points to 0. This means that if you have chosen bad skills you have a second chance to fix and improve your skill tree.

BUT you can take the advantage of this SKILL RESET POTION and boost all the high damage skills to make quests faster, thus leveling up faster. I’ve screen-shotted the perfect skill tree for your new Warrior, check the link below.

NOTE: I can’t remember if you can get 62 SP’s at level 29 as the image shows, but if you can’t leave Shield Bash skill at level 5 instead level 9 as Deviated Crash and Incisive Blow skills inflict more damage. 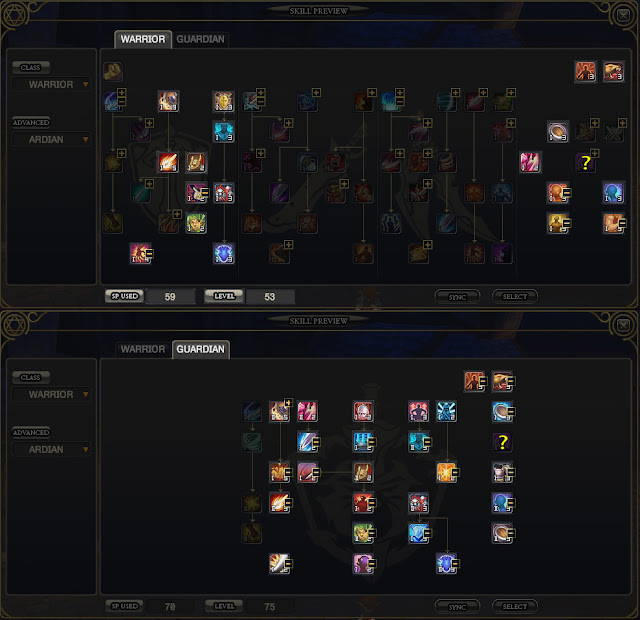 To better improve damage output, I’ve also boosted ENCHANTED HEAVY ARMOR skill. Apparently, the “Strength” in the skill description increases your Physical Attack, Hit Chance and Critical but I’m not really sure about this and we need to confirm this as I tested this long ago and I haven’t took notes.

Another skill that makes me pondering about it is INSPIRED HEAVY ARMOR. Do we GUARDIANS really need it? I’m level 35 and my hit chance is 100% with the help of Medal of Piercing Eyes (lvl 25 medal).

No, I have no major issues in PvE. There are some monsters that debuff me with -60 Agility or higher but that can always be countered with External Debuffs removal potion – never tried though.

Yes, I have some issues in PvP against rogues due to their high evasion, but my target priority goes always for spell casting classes so I really don’t care. Plus, all the rogues of my level I’ve dueled so far never won the fight. That’s because even with their high evasion 1 of our hits makes seriously damage to them because they are squishy. But, oh well. Prepare yourselves for pain because I’m guessing they are killing machines at higher levels. For some reason they are the PvP oriented class in game.

So I leave the question:

So DEVIATED CRASH looks tempting due to the nice damage it inflicts. BUT the problem is, the additional damage is only applied if a critical hit is made. Look at your critical hit chance….

…look again. Guardians have really low critical chance that’s why I’m totally done with this skill. For higher critical chances we have the BERSERKER class much more suitable for that job.

WIND CLEAVE also made me think twice. But have you look at the attack speed effect it causes? The maximum level for this skill is level 7 and at that level it only reduces 9% attack speed. Is it just me or that’s wayyyyy too low? In my opinion 9% is nothing. I was even thinking “Well maybe can be useful for PvP” but…for 9%? Really? Instead of that I can focus my self on stunning people rather than making them hit me slightly slower. If this skill would reduce 50%, 40% or even 30% foe attack speed, then I would no doubt invest points on it.