Heroes in the Sky Tech Tricks and Tips

Heroes in the Sky Tech Tricks and Tips by SakaiSaburo

This guide I write to all people who want to improve their game, their set up and their fun factor. In the past I get asked alot of things, so I will put that into a cool collection of tricks. I write this to help both sides, so it dosen’t matter if you Allied or Axis, you will see they helpfull for both sides. I use Q for a question and A for my answer to keep it simple. Enjoy^^

Q: Which tech is the best for which weapon and why?
A: Critical, pierce and strike techs should always be added on weapons with a high attack, because critical tech ,for example, gives double attack bonus. The best weapon for critical techs are Ceropov Cannons, because they have the highest attack, but lower reload. For example: you have 104 attack, your critical bonus is 208.
Flame and Recovery(repair) techs should be added on weapons with a higher reload(high DPS), but low attack, because they always give 10HP, no matter which lvl your gun is or how much attack your weapon got. Repair tech will always repair 10HP, so you should add them on weapons with high DPS, to get many chances for a repair shot.

Q: What does the percents mean and what is the difference from 1 to 10%?
A: The more % your weapon got, the higher is your chance to get the tech bonus. The damage or effect will be always the same, but you get a higher chance. For example: 1% repair, means around every 100th bullet should give you a repair effect. 10% means around every 10th of your bullets should have this effect. My experience is, these % are wrong, because even with 1% you get way more effects then just every 100th bullet. If you make your gear to str7, you get even another tech bonus and on str9 even a 3rd tech.^^

Q: How can I change my tech or get better % on my weapon?
A: There is a premium item called “New tech” in premium shop. These BP’s can be used to chancge the % or to get a new tech. But: if you buy them, you can only buy them in a kind of lucky box and if you want a Recovery tech, you might need to buy more then 1, because they are always random. If you got 1% repair effect and you use another “new tech recovery”, it will only change the %, but tech will stay.

Q: Can these “New techs” from item shop fail?
A: Yes and no. They cannot break your item, but it can happen that you use a new tech, but nothing changed, because you actually did get the same % like before. But the difference from 9 to 10% is only a problem of ego, because both work actually same. But some people(like me) need always 10% to happy, even when there is actually no difference from 9 to 10%^^

Q: What is the difference from Bulletproof and Evade(Evasion)
A: Unfortunately are all Wikipedias wrong about this. German is, Japanese is and even our Wiki is. The truth is, Bulletproof works only versus Cannon and MGuns and Evade works only versus Missiles and Rockets. If you have a 20% Evade Amor and some1 attack your with cannon or a MG, it will have no effect at all. I tested alot and I guarantee all wiki’s are wrong.

Q: Which tech I should use for my Amor?
A Player who play alot PvP(versus real humans) should use Amor with bulletproof tech, because most people attack with their Cannon and MGs. Evade techs are they key for players who play alot PvE(missions), because on ACE mode, will almost every enemy attack you with rockets and missles. A 20% Evade amor works wonder if you play ACE mode versus the PC.

Critical effect
Critical adds double attack bonus only. If you have a weapon with 50 attack, your critical bonus will be 100. The effect gets displayed in a purple color and critical shots are even possible with weapons without critical tech on them, but the chance is very low. Best weapons for critical techs are Ceropov cannon, Rebow missisles and big fear bombs.
Recommend for any kind of combat style in PvP and PvE.

Flame effect
Flame effect adds 100 HP damage in 10 steps of 10HP per secound. Once your target is hit by this effect, your target “burn” and you can see the 10HP over your target. Best weapons for this effect are weapons with fast reload(like Masinen, Hauser and Cabel cannon), because the attack of your weapon got no influence in the additional damage. The faster your relaod, the more bullets hit your target and the higher your chance to get the effect. This effect is very recommend for Speedfighters, because Speedfighters have very limited time window to attack their target and flame effect is a nice psychological weapon. It’s nice to make people “nervous”, because they do more mistakes when they are under pressure and it’s annyoing when you burn and try to target a enemy

Recovery effect(Repair)
Repair is the best tech for players who play alot of PvE(misssions). The recovered HP is always 10, so everytime you get a repair hit on your target, you repair yourself with 10HP. Recommend weapons are weapons with fast reload(like Masinen), because the more bullets = the your better chance of this effect and the faster you repair yourself.

Pierce effect
I heard very differend stories about this effect. Some say its a strike shot, some say the giving damage hits directly your plane and ignore your amor and so on. But the truth is, this effect does 2 things: a.) it gives penetration effect and you hit the target behind your target and b.) it adds a extra damage! My experience is that the extra damage is between 50-100% of the attack on your weapon. I own alot of pierce weapons, from bombs, missiles, Cannons and MGs and I guarantee you it adds a extra damage(which is displayed in kinda yellow/brown color).
But its also got a penetration effect at the same time. My RoyBrown gun got 10%flame+10%pierce and I noticed more then one time how the enemy behind my target gets hit by flame effect. This means, you are able to shot through your target, you add a lil extra damage and the enemy behind your target gets hit by same bullet.
But the penetration effect does not work for rockets, bombs, missiles or mines, but it adds a lil extra damage, which is displayed as yellow/brown color. Recommend for any kinda of MG and cannon, but not for bombs, mines ect

Strike
There are differend types of strike techs: Bomber, Cannon, Fighter, Battleship and Ground target. Each tech works only for the specific kind of enemy. A “strike bomber” makes no extra damage for fighters for example. Strike “Cannon” means actually “Anti-Gunner” and it’s the most available tech in the game. Strike techs adds randomly extra damage for the specific target and they get displayed and yellow/brown color, almost like pierce, but more brown then yellow. PS: Strike Ground Target is a special tech, because it’s not available to buy “new techs” in item mnal. You only get it by upgrading your item to str 6,7,8 or 9!

Gauge Malfunction(Gremlin)
This effect is the most annyoing effect in the game. Once you get hit, you lose controll of your plane, because it changes the direction you actually want to fly. Left is right, up is down, but gunners got a skill to delete this effect. Gremlin effect doe snot work in PvE(missions versus PC). The best weapons to add this tech are weapons with high fire rate(like Masinen and Hauser). Recomment for players in PvP and OW, but I personally don’t use this effect versus palyers, because it’s verys annoying and I handle other people like I want to be handled, so I step away from this effect, because it ruins the fun of the game. Gremlin techs are(fortunatly)very rare!

Last but not least, I also upload a SS of some of my gear. The Alice Fireworks is already taking out of the game, so don’t worry lol 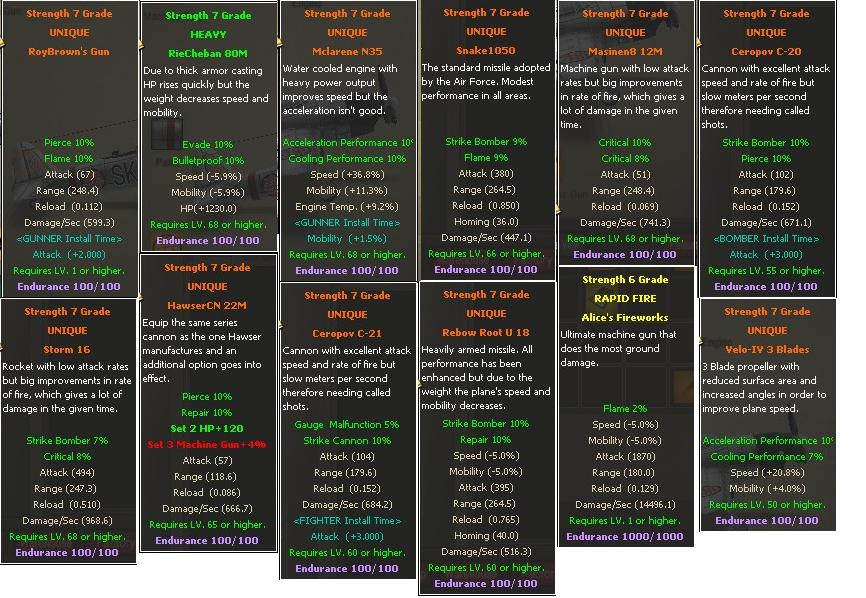 I hope you like my little guide and it helps a bit for find the right tech for your fav weapon. I will focus on weapons and set up in another thread, this was just about techs. THX for reading and good luck in gear lab fellas^^