Heroes in the Sky Speedfighter Guide

I wanna use this thread to have a nice discussion about Speedfighter’s, because I really like that Combat style and I wanna share my experience with other people. Every Speedfighter is very welcome to upload pictures of his planes, Set up ect. Any feedback and questions are very welcome. Have fun

I start with the clarification about “max”speed, because some people haven’t noticed they got actually more extra added speed then you can see on your display. But with my poor English it’s kind of impossible to explain, so I gonna use picture for examples, I hope that helps^^ 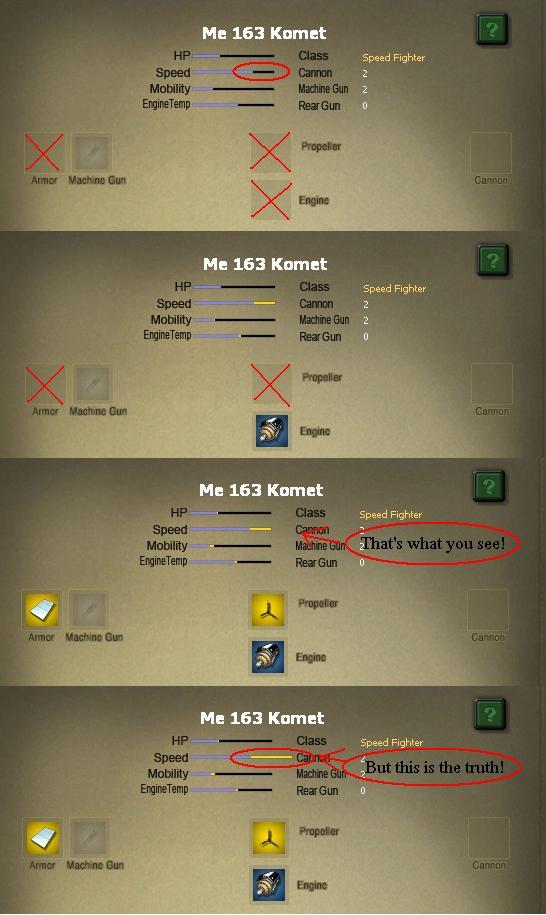 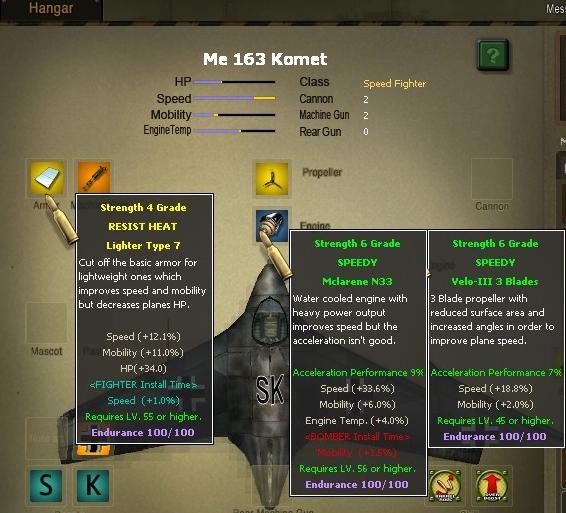 The funny thing is, my +64,5% extra speed bonus get’s added to a plane that has already alot of extra speed. Some of you might can renember my thread about my “crappy premium Komet”. But now take a look how things changed with the right set up (Thank’s to all people who gave me support and Tip’s btw ).

It is useless to say that I might have no chance vs a good Mobifighter in 1 vs 1(PvP), but on the other side, I eat up any Bomber and Gunner with a smile. Other people do alot of more kills in PvP or OW then I do with my Komet, but the way how I get my kills is much fun. If you ever run a way from my Komet with this Set up, you are lost….no mader if u got a rear gun or not^^

Speedfighter’s got a nice bonus in attack bonus if you shoot + boost “into” your target. Because you move forward very fast and your target get’s hit by alot of bullets before he even noticed you picked him as your target. But “head to head” is maybe not the best combad style for Speedfighters, because of your low HP….

Most of the time I use barel roll skill in combination with accelerate, when I’m in trouble, because on that way I jump from point A to point B of the map. Some people PM me and say “you can only run you noob”..but helloooooo…I’m a Speedfighter, not a Firepowerfighter. If you don’t like it, please feel free to leave the room…

The most hated combad style for Speedfighters are bombs. I won’t start a huge discussion if it’s morally akzeptable or not, because most of those people who cry me a river are people who attack me on my re-spawn point with bombs. And those, who call it a “shame” to use it, are actually people who use 4skills and joystick…of course there are also some who don’t have joystick or premium skills, but when 3000 people playing the same game, then there will be always some1 who dislike anything. And this thread is not about bombing, it’s a bout Speedfighter, so please don’t spam mit with “anti-PvP-bombing” stuff. We have allready another thread open for this..thanks you!

I wanna use part 2 to talk about gear( like engine, weapons, amor ect) and part 3 will be the technical part for skills and combat styles. If you have any questions, please feel free to ask them in here. Enjoy!

The negative side on Speedfighters is their low HP. Maybe it’s not smart to say this in a open forum, but my Kryptonite are Firepower-skills. If I get hit by blaze(flame tech or flame skill) I’m lost, because I lose alot of HP just by blaze. If you hit a heavy bomber with blaze it’s might not much, but if you hit me with blaze: sayonara Sakai^^

But Speedfighters can compensate this problem by using differend parts and amors. Here some of the amors I use in my Komet. Some give nice speed and some add more HP. I use differend amors, depends on my current combad style and my enemy. If I play 1vs18 in OW, I prefer to use lighter type and speed parts, because I go no chance anyway, but in missions I use heavy amor even in Komet. A nice combination are Westin amors, because they give me HP and a lil speed^^

Most people don’t know that +10 speed on a slow plane got almost no effect, but 10% on a very fast plane gives a dramatic boost. My tip is: improve always the best attitude with more %, which means, if you got high mobility and slow speed, then add more mobility by using gear with mobility bonus. If you you already high speed attitude, then go for speed. Everybody is differend, but I’m a Speedjunky and that’s why I need speed speed speed^^

So the most imporant gear for Speedfighters is the Engine, because this is your life assurance!!!. If you ever played vs me in OW, you might know that I’m little bit faster then most planes and it’s hard to catch me up. If you ever overheat your Engine as a Speedfighter and 2-3 people are chasing you, then you can be sure you are almost dead. I prefer Acceleration performance to Cooling perfomance on Speed-engines, because 10% longer boost time is more importand then 10% cooling time. Cooling perfomance is better for Mobifighters, because they just boost 1-2 secounds.

Speedfighters got only a few secounds time to attack a target, so I recommend weapons with high DPS and Flame tech. Flame techs(Blaze) are actually a psychological weapons, because people freak out if they cannot hit you, but 2-3 of your bullets make them burn all the time. They lose HP while you fly circles around them. Of course are Speedfighters not the “killers” in a battle, because they have low attack and other people earn way more kills. But Speedfighters are fun, because their kills are really kills and not lucky bombs. Cable cannon is nice if you got 10% tech, because of the very high firing rate and almost every hit is a blaze attack.

Finally I upgraded my Komet to level 64 and I wanna share the results with you guys. Here a intressting picture with the max record per level. There are still few levels to go and I update this picture with next level cap, but for now, I am pretty sure this is the fastest plane on US server atm with 7221km/h** top speed.

Special thanks to Royoed for the support

(**This top speed is the result of barel roll + accelerate at the same time!!) 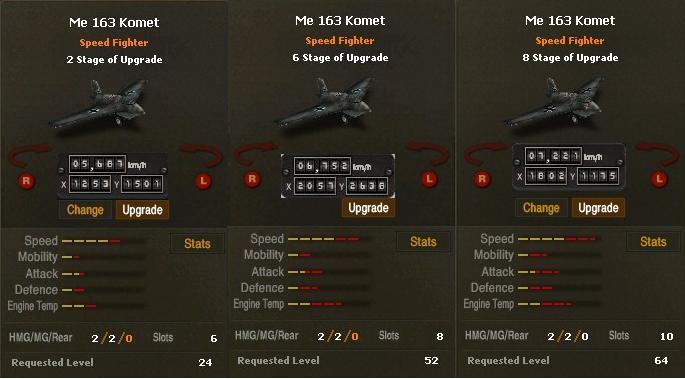