Heroes in the Sky Occupational War Guide by DrizztBaenre

What: OW is a pvp feature pitting Allied and Axis players against each other in battles for territories on a map.
When: Pacific OW is at 2-4 PM PST and Europe OW is at 6-8 PM PST
Where: In lobby the button to go to OW is in the top right corner, which will open the OW map and you can switch between Pacific and Europe by clicking the smaller map on the right.
Who: Anyone above the level 20 is able to join, anyone above the level 30 is able to initiate an attack.
Why: OW grants small bonuses that will be explained in detail later.

Rules and Charateristics of OW

When moving, territories must be linked to the spawn point, travelling over an enemy territory to reach a cut off territory is only possible in push mode, to be explained later.

When attacking, the enemy territory must be connected to a faction controlled territory AND must not be under attack.

A territory that has finished battle, regardless of outcome, will have a flag appear on it. This flag indicates the territory is under peace and cannot be attacked until the flag disappears. Peace will last for 5 minutes.

Each OW, a faction can only expand by 6 territories. This means once a faction has reached its expansion limit it cannot start any attacks until they lose a territory. This limit takes into account ongoing attacks and counts those towards the limit until they are lost. That does not, however, mean enemy attacks will reduce the number of expansions.

Each faction is able to have four attacks ongoing at any one point in time, which means the most battles that can ever be ongoing is 8.

If a player flees a battle before it ends, they will be given a penalty and cannot join another battle until the penalty wears off.

Overview of the map and bonuses

OW consists of two maps, each with over two dozen territories that can be captured.
To move to a territory, simply click on it. If the territory is on the other map, your plane will first travel to a spawn point and then after a period of time will move to the spawn point on another map.
A spawn point will be indicated by a larger dot consisting of the factions symbol and a yellow outline.
There is a more complex way of moving, which will be discussed later.

Bonuses are increases in attack, defense, gems earned, exp earned, and drop rate. These bonuses are limited to +5%.
There is also a discount/premium on item shop prices based on how many territories each faction controls (the side with a greater percentage of the map will gain a discount and the side with less will have to pay a premium. This bonus/penalty is limited to +/- 10%

Overview on starting and joining battles

A battle that can be joined will have four red arrows pointing to it. When a battle has small explosions over it, the battle has commenced and cannot be joined. Mouse over a territory to view the time remaining to join.

To start a battle, travel to it, and when the window pops up, click depart or command, same method as joining a battle.

Battles have a 32 player limit, and normal full battle will be 17 vs 17.
Influence how however can give a faction a numbers advantage.
Faction influemce is indicated by the thinkness of the black/blue/red border (If the faction in control of the territory does not have influence, then the border will show as black. Otherwise it will show as red or blue for axis or allied respectively).
Strong influence mentions the battle will be a 19 vs 15 and weak influence a 18 vs 16.
The faction that gains the advantage is the one who’s spawn point is closest to the territory.

Each battle will last for 8 minutes or until one side wins.

Each player has 6 lives, when they die 6 times, they will be eliminated from the battle (it takes about 10-15 seconds before they are forced out of the room).

Players will be sorted into squads in the order they join battle, there are three squads in total, each can hold 6 players.
The highest level player that selects command when joining will become commander. When they view the map (press M) they are able to see enemy positions on the map. They are also able to move players to different squads by right clicking their name and selecting move. Then just click on another person’s name to switch them.

Upon death, the role of combat commander will automatically pass to the next player.

Each name displayed in map will also indicate what play type they are.
A bullet for fighter, lightning bolt for gunner, and bomb for bomber.

Types of Battle and Winning

Air Battle
Very simple PvP battle between Axis and Allies and the winner is determined by the side will more points. Each kill earns a point, the score is indicated by a sliding bar that is red and blue. If the bar is mostly red, Axis is winning, if it is mostly blue, Allied is winning.
Additionally, the faction with a greater number of players in the battle is awarded a point at regular intervals (since a single player could easily win if they stalled and got more kills than deaths without this).
If one side manages to max out their bar, they will win automatically.

Bombing Battle
The attacking side will be given ground targets to destroy, indicated by a red star above it.
If the target is destroyed, the attacker wins. If not, the defender wins.

Mutual Bombing
Both sides are given targets to destroy, the winner is the side that destroys their’s first.

If no players remain on one side, then the remaining faction will be unopposed and win after a 8 second count down.

If an air battle ends in a stalemate, the defener wins.

If a mutual bombing battle runs out of time without either faction destroying their targets, the defender automatically wins.

Overview of Basic and Push mode

If you are on a territory that is unreachable for the spawn point while in basic mode, you will not be able to move and should go to character selection or town and back to reset your position. 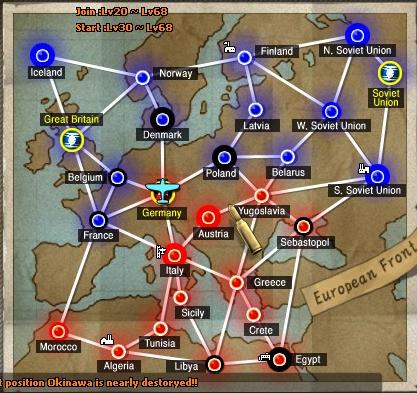 Pacific OW and features of OW 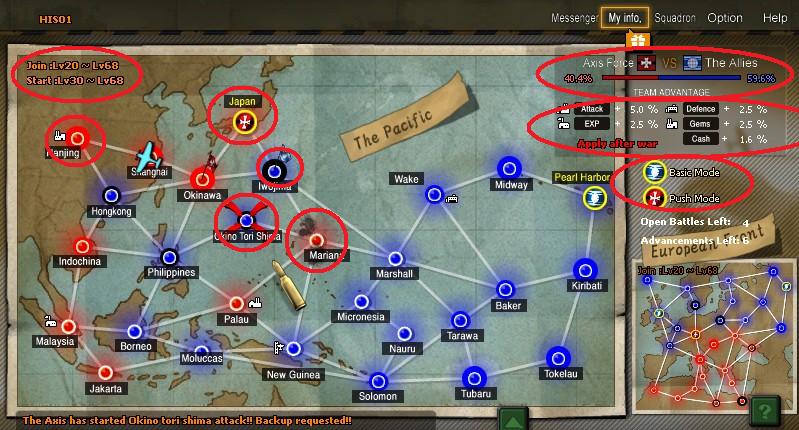 A fairly common question when OW is going is “what kind of fight is that?” in regards to some of the different battles. So, I thought a little guide on the various battles would be helpful.

First off, there are 3 kinds of battles:

1) Air Superiority – This is a pure air battle. Generally speaking the side that gets the most kills wins. Due to this you usually want your higher levels/best dogfighters in these fights as less experienced pilots will often get farmed for easy kills. The preferred plane for this kind of battle is a Fighter, but some of the quicker Bombers/Gunners can also be helpful for their various buffs/heals.

2) Attackers Bomb – In this battle the attacking air force has to destroy a ground target before time runs out. The defenders simply have to try and stop them. There can be 1 – 3 targets depending on the map. On these maps it’s usually best to focus on destroying the target and just evade the enemy to the best of your ability. The preffered plane for this kind of battle is a Bomber, but Fighters providing cover from enemy planes and gunners providing heals/buffs can also be helpful (and they should attack the targets as well, when oppurtunities present themselves).

3) Both Sides Bomb – In this battle both the attackers and defenders have targets to bomb, with the winning team being decided by who destroys all of their targets first. Think of it as a bombing race. The gameplay is similar to the “Attackers Bomb” maps, but due to the racing nature of the fight, Fighters backed by the Ammo Support buff provided by Bombers can prove to be very valuable by getting to targets quickly and bombing them.

Another thing to note is that on certain maps one of the sides will have an advantage of having a greater number of players able to join the game. The idea behind that is that in some areas (usually due to how close they are to a capital), Axis/Allies will have a stronger natural influence. In an even battle the cap for players will be at 17 players for both sides (17 vs 17), but in some of the maps where one side is favored the cap can range from 15-19.

And now for what you all have been waiting for, the battles of Europe!