Heroes in the Sky Newbie Guide

Heroes in the Sky Newbie Guide by Flether

This will be a chaptered guide through the general bits of the game, starting with the interface, and moving on to basic concepts in the game, and then covering some more detail of the game.

1: The Interface – A guide to both the base view and flying interface

2: Learning to Fly – How to equip things on your airplane, also what all the fancy names and bars mean. Also covers how to strengthen and upgrade your equipment, along with the things available in the cash shop.
3: Missions & Quests – How the mission system works, as well as quests. Will cover Medals and how to show them!
4: PvP – Covers the game play modes available, and gives some hints & tricks for PvP-ing.
5: Social Tools – How the chat interface works, private rooms, and trading.

Chapter 1: The Interface – A guide to both the base view and flying interface

Welcome to this guide to Heroes In the Sky! Here in the first chapter I’ll be covering the games’ interface, as well as running you through how to create your pilot and do the tutorial.

First off, you need to create a Pilot. This is done by simply selecting an empty slot and clicking “Create Character”.

Now you’ll want to select to do the tutorial, as although it forces you to use the keyboard, it still gives you a sense of what to expect. Here’s a little snapshot of the first mission, as well as a few pointers as to what all the shiny things on your screen are. Follow the instructions presented to you and use your uber-skills to fly through the rings! 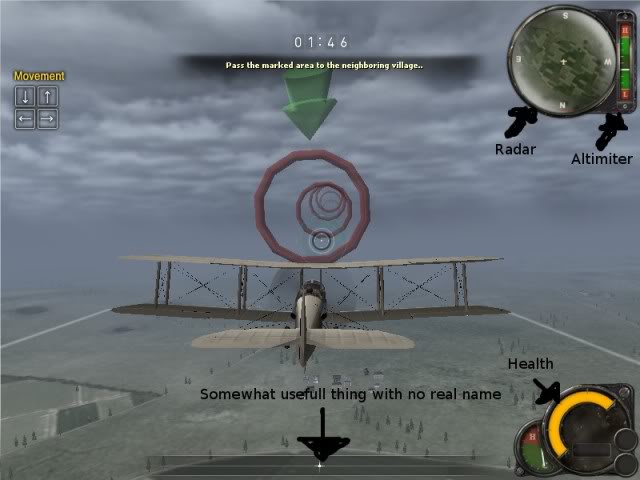 The next mission is pretty much the same, but you’re timed, and there’s one gate a ways off. Now you get to use the ever-useful BOOST. Press (and hold) the “space” key and watch her go! But watch out, if the little meter on the bottom right goes red (see picture), you’ve overheated your engine and have to wait until it stops blinking red to use BOOST again.

In the next step, you’ve taken an airplane with some actual weapons on it, time to get to the good stuff! Machine-guns are fired with the “A” key, Rockets with the “S” key. Use either of these to destroy the zeppelins that show. Be careful, as you CAN hit their wreckage and die. Trust me.
The yellow number is how much damage your shot has done by the way.

Now to shoot something that actually moves. 2 fighters will show up, and this time you get to shoot back! One handy tip is to look at your cross-hair in the center of the screen. When it looks like this (see picture), you’re lined up on your target and will most likely hit.
Aim slightly in front of your target, take a breath, and fire! He should quickly turn into a flaming wreck.

Next you get to shoot something stationary again, but this time it’s a building. This time, use your rockets to get a feel for them. Note that when you can see your enemies’ health-bar, you’re in range of your longest ranged weapon!

After this, the tutorial will be complete. Congratulations! You get to now choose your side.

After choosing your side, you’ll be met by a slightly confusing screen, with lots of little buttons and flashy things and the like. The hectagons represent different battlegrounds, from the Europe I & II to the PvP grounds and Attack & Defend area.

We’ll start off with taking a look at the button named “Item Shop”. Here is where you can buy basic equipment to stick on your aircraft, which are split up into the groups Equipment, Weapons and Decals.
Under “Equipment” you’ll find Armor, Engines and Propellers. “Weapons” Holds the many different weapons, from machine-guns to bombs and guided missiles. “Decals” sells some symbols that you can stick on your aircraft to customize it some, and hopefully be able to buy custom skins from in the future.

Since we don’t have much business to do here yet, let’s move on to the Hangar. Here is where you can see your aircrafts stats (in form of the bars at the top), which tell you its Health (HP = Hit Points), Speed, Mobility (think agility… how well you can turn) and Engine Temp (which is how long you can use BOOST). You can also see what “Class” your airplane falls into, as well as how many Cannons, Machine-Guns and manned-guns it can hold.
You can also switch out the equipment on your airplane by double-clicking an item in your “Equipment” tab on the right-hand side. More will be said about equipment at a later point.

Moving on to the “Factory”, here we can take a look at what different airplanes are available to our chosen faction, Allies in this case. The bottom row now lists 3 nations as well as Gunner and Bomber. Each nation has a Airplane Tree, which holds many different and unique planes, all with different strengths and weaknesses. See my Airplane Tree thread for all trees (and later it’ll have detailed information about each airplane as I get to trying them).
It’s important to know that this is where you buy your new aircraft at levels 2, 6, 12, 20 and 30. All nations start at level 2, and Gunner/Bomber start at 12. Feel free to click around and see what all the planes look like and their stats!

We’ve now looked at what you need to use at the very beginning, so lets press the “Exit” button twice, taking us to the Base View. Here we can drive our aircraft around on the ground along with other players, chatting, trading or just “plane” messing around (haha. I kill me.)
The building above us is the Item Shop, and is simply a second way to get to it. The top right shows a map, with you being the white/green dot.

The green box below us is a player with a store up, lets click on it and see what he’s got… Here you can hover with your mouse over the different items to see their stats, and click on it to bring it up on the “buy” section at the bottom of this new window. In this case we’ll not buy anything, since we don’t have much money, and this guy charges way too much =P

If you drive around a bit, you’ll see the Black Market, Warehouse and Fleet House. The Black Market allows you to buy an item that may or may not be worth it, is a bit of a gamble, but can pay off if you have the cash to spend. The Warehouse is used to store items, as without any inventory expansions it can get a bit crowded. Fleets can be viewed, joined and created from the Fleet House, and are this games equivalent to a Clan.

-Work in Progress-
2: Learning to Fly – How to equip things on your airplane, also what all the fancy names and bars mean. Also covers how to strengthen and upgrade your equipment, along with the things available in the cash shop.


3: Missions & Quests – How the mission system works, as well as quests.